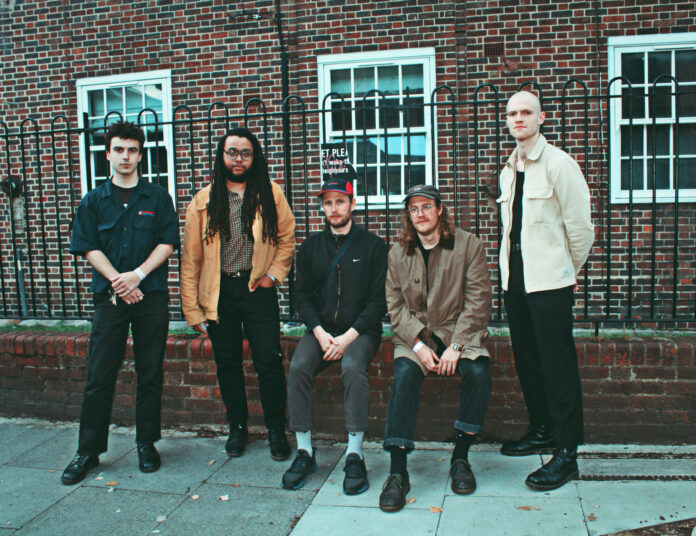 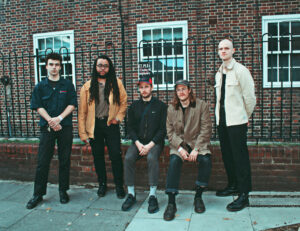 Shifting their way from DIY bedroom band to a thriving five-piece that can now…wait for it…. play LIVE SHOWS, they will be accompanying their EP release (13th August) with headline shows in Leeds and London (obviously this will be determined by if BoJo stops fucking things up and our ‘freedom’ remains).

Building on their Devo-esque and drum-machine-driven style of post-punk ‘AWAKE’ is Beige Banquet at their most spiky and propulsive. While only two and a half minutes long, the track feels like a journey that’s underpinned and continuously pushed forward by the robotic cracks of the motorik drum machine. The jerky and tightly-wound guitars fight and bounce off each other, in a Uranium Club kind of way, before opening up into a sweet and almost melodic bridge. The art-punk split narrative of layered spoken word vocals finally carry the track into a powerful outro with a huge cathartic release.

In the same vein as their debut album, the EP was written and recorded by guitarist Tom Brierley in his bedroom studio during the third UK lockdown. However, this release features collaborations with a cast of future bandmates and friends, with clarinet by Theo Bergot, backing vocals by Joe Munsey and Benjamin Mace- Crossley and additional vocals and lyrics by Rosie Pearce. The richer and varied textures create a much more dynamic and deeper feel that builds on the sound established on their 2021 debut album ‘Beta’. The self-titled EP is now available for pre-order via the Beige Banquet and Just Step Sideways Bandcamp pages.