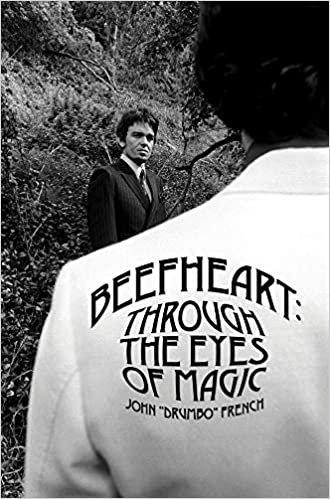 First off, a confession – you can usually take it as a given that I’ve read the whole book I’m writing about. Not this time, I’m afraid – but don’t take that negatively – simply put, the book is massive, nearly 900 pages. And we’re talking pretty small print on shiny paper with a slightly grey tinge … yes, we’re in the Self Publishing Zone! But these are just details… I’m all for creative people taking hold of the means of production and escaping the delays and run-arounds of trying to get something published in the mainstream. “Beefheart” is a very good – if extreme – example of the genre, for good and ill.

This is in fact the 3rd edition of Drumbo’s memoirs, though it’s the first time in hardback. In many ways, it’s almost like an evolving art project as extra material accrues or something else is remembered. There’s also a new 100+ page track-by-track guide to the Magic Band’s output and a photo section, along with other greyish illustrations scattered through the text. Maybe there’ll be a thousand-page 4th edition in a few years’ time?! But it’s this naïve Outsider Art approach that’s really drawn me to the book, after being initially daunted by the sheer size of the thing.

Basically, the book’s forty-one chapters take the form of roughly chronological progress through the Magic Band’s career. If Beefheart benefited from a lot of uncritical adulation early on, this is the other side of the story.

So I’ve aimed to dip in and out of the book at salient points, from the “Safe As Milk” album onwards. Like many old time fans, I discovered the Captain courtesy of John Peel in the late ’60s. Sure, it was the Blues (man), but from a different planet to Chicken Shack and Fleetwood Mac. Fast forward a couple of years later, and my first hearing of “Trout Mask Replica” coincides with my first acid trip (not intentionally) for a uniquely powerful experience. Over the years though the whispers accumulated – the Captain had made some very far out music and was given a lot of leeway by a generally adoring press, but current and former Magic Band members hinted at an oppressive cultish atmosphere, along with more basic concerns like getting paid or even getting enough to eat.

This is all recounted very convincingly, and often with a nice dry sense of humour. Unfortunately, concepts like editing, spell checks and so on are of little concern, so there’s a fair amount of repetition and other text glitches to get through. But again, it’s as much part of the author’s role in the story, that it all tends to come out in a big raw unedited gush, Basically, conversations are recorded verbatim, rather than edited for content, generating a stream-of-consciousness feeling which is ideally suited to the music and the time.

There was a lot of mystique about the US West Coast/underground groups in the late ’60s, but none as much as Love and Captain Beefheart. This was nurtured by early fans like John Peel and built upon by mags like Zigzag. A story eventually took shape of out-there genius savant Beefheart composing the music, with all its quirky stop/start rhythms, along with the super strange lyrics and then teaching the group members how to play them. Over and over. Out in the desert. Until they got it right. The bizarre trippy names like Winged Eel Fingerling, Zoot Horn Rollo and The Mascara Snake reinforced the far out vibe, along with things like the “Troutmask” cover photos, showing the group in what looked like a permanent psychedelic daze.

The main drift of the book is showing that all this far out stuff had a downside, however much amazing music it produced. Drumbo tells story after story of Van Vliet/Beefheart’s manipulative mind games, constantly undermining the group members – there was usually a Beefheart “favourite” in the band, and generally a scapegoat too – but which was which?
After a while it’s clear that the cultish atmosphere includes many features of what we now recognise as Grooming and Psychological Manipulation. Group members were cut off from friends and family. The Captain controls everything to do with money, living conditions, drugs and food as well as the music. As someone says very perceptively towards the end of the book: “Don van Vliet was fortunate to have lived in an era where his psychopathic behaviour could be misconstrued as genius”
It’s this question that becomes a recurrent theme – how a scene that was initially based on the potentially liberating forces of psychedelics soon produced a kind of dystopia where it became “uncool” at the very least to challenge obnoxious behaviour. Drumbo gives numerous examples of how the group were intimidated by the Captain, and afraid to be the one to stand out. Equally, the media didn’t want to look uncool by not “getting it”. There’s a particularly fawning 1971 Rolling Stone interview where nonsense like “there are only forty people in the world, and five of them are hamburgers” go unchallenged.

It’d be easy to criticize this book for things like repetition and lack of editing, or the criminal absence of an index, but that’s missing the point. It’s one for the seriously committed follower, and Captain Beefheart & the Magic Band are just the sort of group who do inspire that real hardcore following (see also the Grateful Dead). There are contributions from most of the surviving Magic Band members and associates. Apart from all the in-depth detail about the music and the circumstances of its making, there are a lot of fascinating side trips along the way – the group’s early recordings were produced by a young Richard Perry, who was to go on to mega mainstream success with Rod Stewart, Barbra Streisand & Diana Ross. Drumbo also recounts just how tenuous things were for non-mainstream musicians in the mid/late 60’s with record labels & producers eager to cash in but unsure how long all this long haired rock music would go on. Thus the original marketing idea was that the group should be a Blues band, aiming to take listeners from all the Brit acts like Foghat, Savoy Brown who were cleaning up in the wake of the Stones. The Al Capone style suits and hats of the “Safe As Milk” period were meant to show they weren’t anything to do with Flower Power, in case that became last year’s thing. The next album was all but ruined by a producer who smothered the whole record in “Itchycoo Park” style phasing, but by “Troutmask Replica” they’d made their own space in the scene, and also go on to be a massive influence on the post-punk music scene. It’s impossible to imagine the Fall, for example, if Beefheart hadn’t happened.