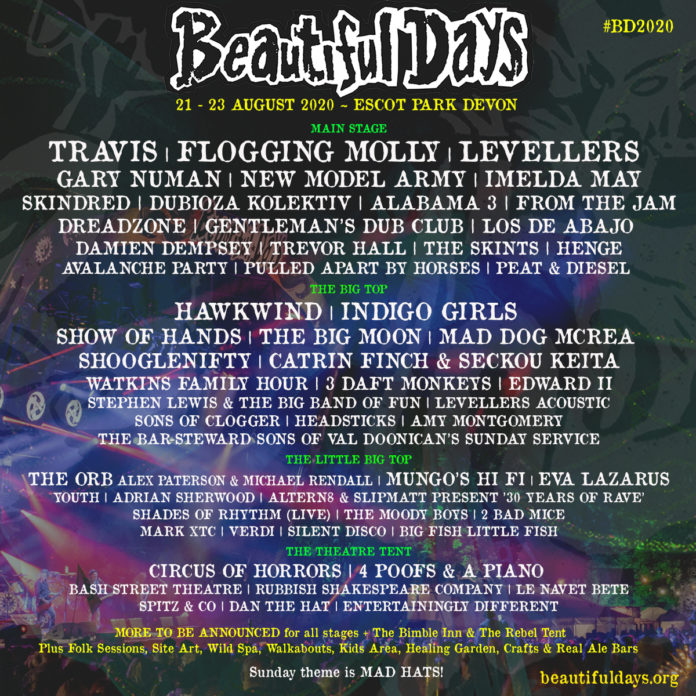 Beautiful Days festival have announced the first wave of artists for their 18th year including Travis, Flogging Molly, Levellers, Gary Numan, New Model Army, Hawkwind, Indigo Girls, Imelda May, Skindred, Dubioza Kolektiv, Dreadzone, Show Of Hands, The Orb and Circus of Horrors. The festival, which takes place from 21 – 23 August in the grounds of Escot Park in Devon, has also revealed a ‘Mad Hats’ theme for the Sunday with festival-goers invited to wear the most colourful, quirky and creative hats along with fancy dress outfits of their choice.

Tickets are on sale now and available here www.beautifuldays.org/tickets

Topping the bill on Friday night are Celtic-punk rockers Flogging Molly. Led by Irish frontman Dave King, the social and political awareness that drives their music is never more prominent than in their latest release Life Is Good and they are renowned for their passionate and energetic live shows. Scottish indie-rock band Travis will headline the Main Stage on Saturday night. The band recently celebrated the 20th anniversary of their multi-platinum selling hit album ‘The Man Who’. Their new single ‘Kissing in the Wind’ is out now. Festival founders Levellers will close the festival on the Sunday night. They have announced a new studio album for release in 2020. Levellers will also open the weekend with an acoustic set in The Big Top.

Also announced today for the Main Stage at Beautiful Days 2020 is icon and pioneer of electronic music Gary Numan, plus New Model Army who are celebrating their 40th anniversary this year, Irish singer-songwriter Imelda May, one of the UK’s most formidable live acts Skindred, the Balkan ska punk extravaganza that is Dubioza Kolektiv,  punk-rock, blues and country band Alabama 3 and From The Jam who are celebrating the 40th Anniversary of critically acclaimed album ‘Setting Sons’ which earnt them their first top ten hit single ‘The Eton Rifles’.

Topping the bill in The Big Top are the legendary and pioneering Hawkwind. With founder Dave Brock still at the helm, the band celebrated their 50th anniversary last year. American folk-rock duo Indigo Girls headline The Big Top on Saturday night with Sunday’s top spot still to be announced.

The seated Theatre Tent will play host to theatre, comedy and dance with shows including the circus that is like no other – Circus Of Horrors who are celebrating their 25th anniversary, the talented quadruple that is 4 Poofs & A Piano (known for being the house band BBC One chat show Friday Night with Jonathan Ross) and performances from Bash Street Theatre, Rubbish Shakespeare Company, Le Navet Bete, Spitz & Co, Dan The Hat, Entertainingly Different and their ever popular Rise’n’ Shine sessions.

More is still to be announced for all stages PLUS The Bimble Inn and The Rebel Tent but Beautiful Days has never just been about the music though – as well as the music stages and seated Theatre Tent the festival also hosts walkabout performances throughout the weekend, site art installations, an array of food & crafts stalls and real ale bars run by local brewers Otter Brewery. And back by popular demand are the pop-up folk/roots sessions in The Fiddler’s Arms next to The Big Top curated by Seth Lakeman’s musician dad Geoff Lakeman. A hardcore of session players will be on hand plus guest musicians from the stages and festival-goers are invited to join in too.

Tickets for Beautiful Days 2020 are on sale now – all tickets are weekend camping and there are discounts available for children. There are family campsites, campervan fields, caravan pitches and bell tent, yurt & tipi hire options available for 2020. For information about accessibility, go to the festival website.

Tickets are on sale now and available here www.beautifuldays.org/tickets