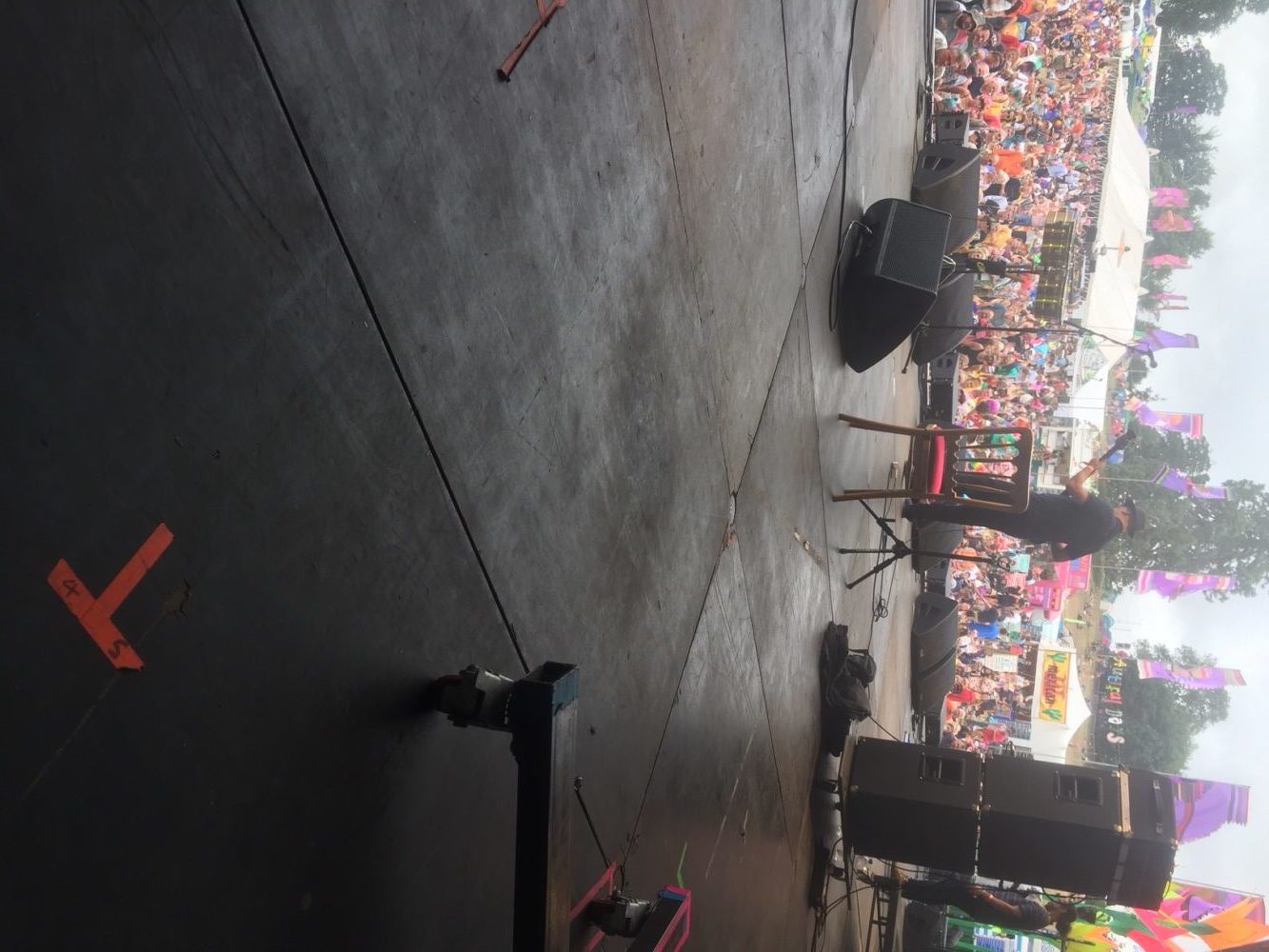 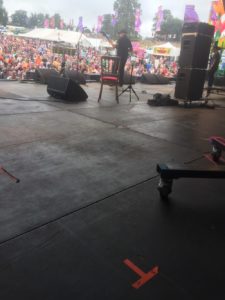 Ducking Punches have travelled up from Norwich for their melodic punk rock tinged rushes that hark back to a time of transit van bands plying the country with their foot to the floor fuzz pedal trips and loud/quiet post-Husker Du tunefulness. It’s quite refreshing to know that there is actually still someone out there doing this.

Jah Wobble and The Invaders Of The Lost Heart are the planet’s least compromising party band with a set that takes itself off on a myriad of tangents and possibilities lost inside its multi-hued, dub-heavy brilliance without ever losing the crowd. Of course, being a driving force in Public Image Limited when they somehow took the possibilities of punk to a wilful and genius extreme on those icons first two albums, has set the stall for Wobble for decades. That sense of adventure and a deep understanding of the very vibrations of the bass heavy and of music and its spiritual power have resonated through his choices for decades.

Wobble himself is an impressive presence.

A genuine geezer who cares little for convention, Wobble (famously nicknamed by Sid Vicious) also happens to be one of the best bass players in the world. Those rumbling tones shiver through the stage and across the surrounding hills. The signature sound leads his band through a willful and eccentric set that makes little concession to convention and yet still brings the audience with it.

A classic ska cover is perhaps an obvious choice but not when it is gradually deconstructed into a ten-minute version that details the art of dub in one of those brilliant spoken word asides that Wobble deals in and yet is somehow is still captivating. With his band of killer players behind him Wobble is in his element as they switch from neo Bitches Brew grooves, heavy dub, and post-punk wonky – sometimes all in the same song! and always with the people dancing in proof that, with music, if you have the nerve, people will come with you believing in the mesmerising jive with Wobble being like some kind of pied piper of the bass end.

We first saw Henge when they played their first show a few years ago in their Manchester hometown. The band were wonk genius even then but have now expanded their outer space set into a master class of madness.

Like Magma crossed with the Funkadelic mothership crossed with Space Ritual and then takes a trip, the band somehow take their multi-time signature grooves and bring everyone with them. It’s a testament to this audience that they are prepared to travel the cosmos with the band’s long and mentally enthralling musical exercises somehow sounding like a wonk pop from a parallel universe.

Dressed in 1972 Hawkwind/Sun Ra space garb with flashing lights and masks and all that attendant madness, this is magic mushroom boogie, built around a 21st century edge, with a multi rhythmic approach that commands the dynamics and keeps us rooted on earth whist exploring deep space skree and comes complete with two silver cat suit dancers who challenge the legendary Stacia to gonzoid sex stomping.

Not that Henge are silly. Although they don’t seem to mind being silly. But this music has a real depth making them arguably the best new prog band out there. Their music and joy de vivre would work at any festival they cared to play. They are so out of sync with everyone else that they are perfect. Henge understand that you can be as loony as you want as long as you have the groove and every song has a wackoid rhythm

There is method to this madness that makes them  a multicoloured, multi rhythmic, multiplied, multi-storey  mass of total genius – a Gong with a 21st century record collection, the aforementioned Magma with a chance to dance and perfect with their love of rhythmic impossibility but turns them into a very warped dance band that wouldn’t sound out place on a Gorillaz tour and surely that’s the beauty of Henge – they are so far out there that they don’t fit in anywhere.

They run with the joke that they are aliens who have come to save the humans from their fast coming ignominious demise and for an hour we feel saved. Within one minute you’re entranced, within two your in love, and within three you are alien. They could even be the band of the weekend with their lunatic empire.

There is a science to perfect rock n roll.

The Wildhearts are from the other end of the musical spectrum than Henge but their powerful, no compromise, cranked eleven out of ten Marshall power rock n roll doesn’t sound out of place. The band who have been battered and bruised by life but wear their hearts on their sleeves and have a gonzoid power that is invigorating in its sheer noise.

No-one stumbles in here by chance and all those years of studying the minutiae of the form and the tiny space to operate in – somewhere between the Ramones and Motorhead – and yet still stake their own claim have made the band titans of the form. That they also add an emotional honesty, an exclusive temperament and a sheer bravado and honesty to what they do also infuses these songs with a power.

The fact that they also remember to bring in a classic melodic nous  underlines their skill for survival in a world where black T shirt rock n roll is firmly placed on the fringes but in the hands of people who truly understand the form is as powerful and thrilling as ever.

Like Dreadzone they day before, the perfectly named Dub Pistols are classic festival fare. Their soup-com of 21st-century ska, dub and dance grooves is perfectly pitched at the late afternoon crowd. I don’t think I’ve been to a festival in the last two years where they haven’t been sending the main stage into raptures of delight.

If the Specials had formed after acid house they would be in this ballpark – a melting down of all the UK’s favourite multi tribe dance obsessions into one streamlined bouncing whole.

They even dare to cover the Specials classic Gangsters and the song, which details a tense terse phone call with the Specials then manager Bernie Rhodes is turned into a celebration with the band commanding its perfect groove and the Dub Pistols know about groove. Like Dreadzone they have it boiled down to perfection. Like mad scientists they have this tested to perfection, creating the correct sense of speed and dynamics to alchemist something that is so perfect that no mere human can stand still too its infectious vibrations. The twin vocal attack adds a level of direct communication and the band lock into that rhythm perfection that sees them yet again conquer a field in Merrie England.

Their gipsy rap has never worn thin because they still know how to create a party. Eugene Hutz is a great frontman, bouncing around on his jester legs like a hyper grasshopper rasping out his thickly accented lyrics and sending out lightning bolts of energy to the adoring throng.

The song’s gipsy edge is provided by long-term violist, Russian born Sergey Ryabtsev,  who hooks his violin under his chin and unleashes centuries of melodic tradition that unseals all inhibitions with its soaring melodic beauty. The gipsy violin is, indeed, a glorious sound and its emotional key flurries are crucial to the band sound and a neat reminder that the saddest of keys can also be the most perfect party tunes. The high energy performance makes its mark as Hutz bounces from one side of the stage to the other with his rasping poetry tells tales from the fringes, folktales from the fault lines in a set of songs of love and fury.