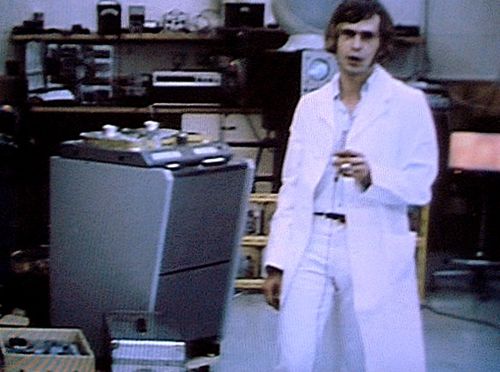 Perhaps one of the most classic sixties figures and one of the most oddball pieces of fascinating flotsam and jetsam to wash up n the counter culture beach Magic Alex has died at the age of 74.

For a few years in the middle of the LSD madness Alex was part of the Beatles inner circle – a mad inventor who came up with stuff that was far out if not always practical.

Yannis Alexis Mardas had become friends with John lennon and was placed on the Apple pay roll as an inventor and tech guru after giving Lennon his blinking light invention, dubbed the ‘Nothing Box’, is said to have stimulated Lennon’s LSD trips.

You can’t get any more sixties than that!

He designed a studio for the Beatles that never really worked and nearly got them to move to Greece and buy an island and was part of the creation of one of their most tripped out songs
‘What’s the New Mary Jane’ and appeared in the Magical Mystery Tour film – it was that period when the Beatles were charmingly and trippingly mad. He was also in Rishikesh with the band in 1968 in India and was the person to break the news of Lennon’s divorce plans to then-wife Cynthia Lennon.

After leaving the Beatles inner circle he continued to be a madcap inventor and moved back to Greece.

In the 1970s, the anti-terrorism industry offered bullet-proof vehicles, bugging devices and security hardware, so Mardas set up companies offering these products to VIPs. King Hussein of Jordan bought a fleet of cars that Mardas had customised, but then reportedly had the changes reversed when tests demonstrated them to be useless. In 1987, Mardas was a managing director of Alcom Ltd, which specialised in electronic communications and security. He later returned to Greece.