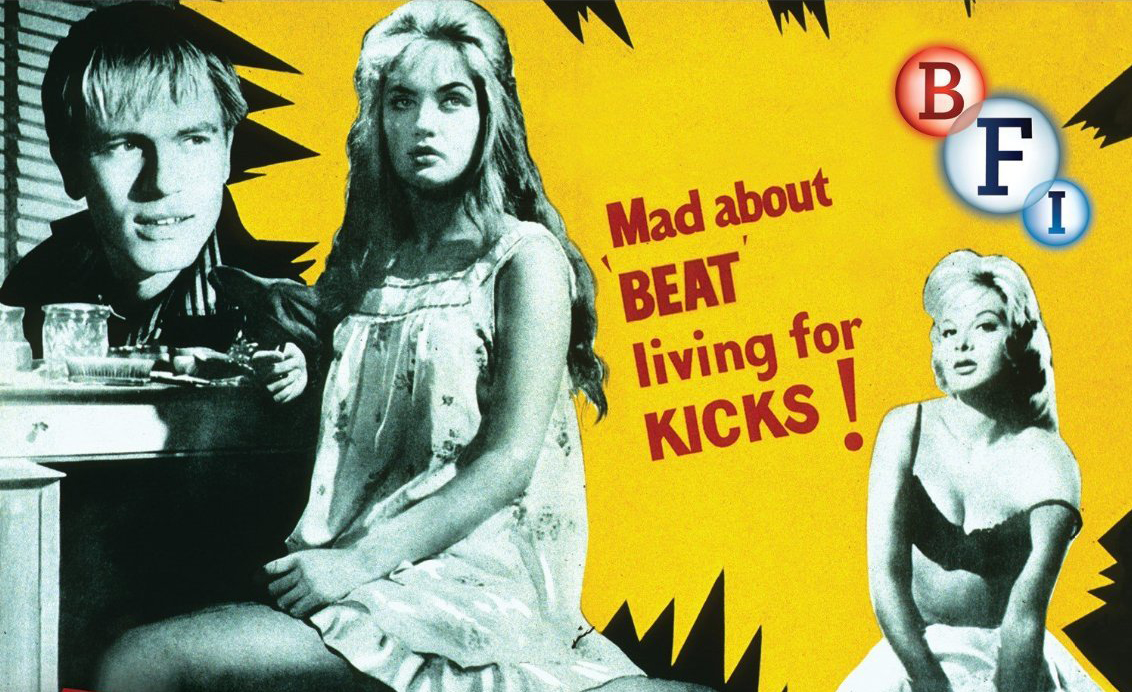 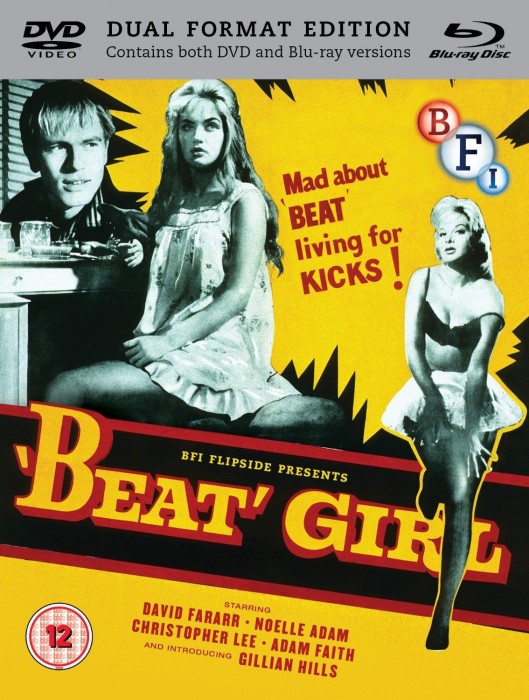 An unjustly overlooked cult British film from 1959, juvenile delinquency movie Beat Girl, will be re-released in Dual Format Edition (Blu-ray and DVD) on the thankfully reactivated BFI Flipside label on 25th April, 2016. Newly remastered in 2K from the original negative, sporting a fully illustrated booklet and packed with extras; this quintessential black and white Flipside title has never looked better and is straight from the fridge, daddy-O.

Yet a dark secret from Jennifer’s new, 24-year-old French stepmother Nicole’s (Noëlle Adam) sordid past inexorably leads the action, by way of Rebel Without A Cause-style car / train ‘chicken runs’ and ‘happenings’ in Chislehurst caves and at Jennifer’s father’s pad, to Soho’s foremost den of inequity. This is the infamous and fictional Les Girls strip joint, run by stage manager Simon (an early role for the amazing Nigel Green, who would star in Zulu and The Ipcress File) and the magnificently shady Kenny King (the late, great Christopher Lee was never more oleaginous and sleazy): “Somebody down there likes me,” purrs Lee, as Beat Girl Jennifer appears to be falling into his clutches.

That’s pretty much it for the plot, but in Beat Girl the music and mise-en-scène is far more important. Economically directed by Edmond T Gréville, a French-born director working in the British film industry (who in his 35-year career was praised by both Graham Greene and Cahiers du Cinema, but never really received his due credit), Beat Girl is a remarkable film on a number of levels.

Beat Girl was the earliest British motion picture soundtrack issued as a 12 inch LP, in glorious mono. Barry’s introduction of rock ‘n’ roll to film scoring was incredibly influential (just listen to the later Morricone ‘Dollar’ film soundtracks) and his rockin’ crime jazz style, fashioned for Beat Girl, can be detected throughout the composer’s terrific James Bond scores of the 1960s and beyond. A case could also be made that Barry’s work here even influenced the evolution of seminal British acts, such as The Beatles and The Kinks. Adam Faith’s rendition of the Barry and lyricist Trevor Peacock’s rock ‘n’ roll numbers (the vocal version of the iconic title theme, covered by The Damned in 1986, the Buddy Holly sound-alike ‘I Did What You Told Me’ and the Eddie Cochran inspired ‘Made You’) are fine, but it is within the eclectic and potent instrumental score (from the lounge lizard ambiance of ‘The Immediate Pleasure’ through the ominous ‘Slaughter In Soho’ to the quasi left field jazz that evokes Jennifer’s architect father’s unintentionally nightmarish building block plan vision of future urban living, ‘The City 2000 A.D.’) that the potency of the Beat Girl score, and movie, ultimately resides.

Certainly, there is much unintentional hilarity to be derived from Beat Girl; a film that would have undoubtedly pushed On The Road author and unwitting ‘Beat Generation’ figurehead Jack Kerouac further into the depths of alcohol fueled despair. Most of the chuckles are at the expense of the dialogue supplied by Dail Ambler (the non de plume of British female pulp thriller author Betty Mabel Lilian Williams). “Fighting’s for squares,” Dave reprimands a trio of Teddy Boys, who have just smashed his beloved guitar and car to pieces. “Love? That’s the gimmick that makes sex respectable, isn’t it?” announces Jennifer, while David Farrar’s Paul Linden screams, with perhaps more gusto than was required, at his daughter’s friends partying in his dream home, “Go on, get out of here, you jiving, driveling scum!”

However, there is also much to recommend it, as a top of the line British youth exploitation movie. Walter Lassally’s cinematography and Elven Webb’s art direction give the picture a suitably sleaze noir look. The cast is uniformly excellent, in particular the pouting, sullen hipster Gillian Hills, who is utterly memorising as the ultimate poor little rich girl / bad girl. The seedy environment is convincing, and the seamy striptease routines, in particular Pascaline’s ‘exotic’ dance with scarves, are fairly explicit for England 1959. It’s easy to see why the film was awarded an “X” certificate in the pre-Beatles UK, received several cuts and was banned in France, Italy, South Africa and Turkey. Adam Faith’s rough fringe haircut foresees The Beatles post-Hamburg style, while The Clash’s Paul Simonon could have easily worn his beat-up leather jacket and striped shirt in 1976. In fact, Faith’s line, “If you wanna fight, go and join the army, it’s the place for squares”, could have been uttered by John Lydon at the height of ‘punk’.

Despite the often clumsy attempts by the filmmakers to cash in on the then current media hysteria concerning the ‘generation gap’ and attempts to define what the newly termed ‘teenager’ actually was (posters for the film proclaimed “This could be your daughter!”), Beat Girl does, probably in spite of itself, capture some of the spirit of disgust at adult hypocrisy inherent in the Cold War teen experience. Much of this is down to Gillian Hills’ dynamic performance and the impudent way she delivers lines, such as: “Next week – boom! – the world goes up in smoke. And what’s the score? Zero!” “She’s the greatest Brit teen silver-screen bad girl of all time,” writes BFI curator Vic Pratt in the accompanying DVD booklet, “and she’s wild for kicks.” He’s not wrong.

With several alternative versions of the film (featuring additional amusing sequences with David Farrar and Noëlle Adam), a revealing 2016 interview with Gillian Hills, a 4 minute ‘saucy’ 1950s pin-up short, Beauty In The Brief (which recalls the milieu of Beat Girl), a 1958 ‘glamour’ short, Goodnight with Sabrina, featuring the Jordan of her day, Sabrina (born Norma Sykes) and a short 1955 supernatural flick, Cross-Roads, starring Mr. Christopher Lee, this is the ultimate home entertainment issue of Beat Girl. The only thing missing is a CD of the film soundtrack album.

~
Beat Girl is released on 25th April, 2016. Pre-order via the BFI shop. And if you want an added incentive to buy it remember every purchase of a Flipside release supports the work of the BFI.