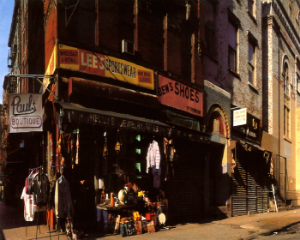 It’s hard to believe that it is 25 years since the Beastie Boys released Paul’s Boutque which was considered a disaster at the time but heralded a whole new way of making music for the band and their contemporaries.

Many people expected more of the yob rap that they were dealing out so well with their debut but the introspective second album drew on jazz and other unlikely sources and created a whole new sonic palette.

The album  also came with great cover art which was the photo of a shop on the corner of Rivington and Ludlow in Lower East Side in New York City which at the time was a run down and dangerous area where the band had hung out in the formative years with the legendary hardcore band Bad Brains.

The plan is that the current owner of the Manhattan storefront on the album cover has agreed to showcase a mural paying tribute to the Beasties album.

Artist Danielle Mastrion has been tapped to paint the iconic tableau, which will grace the outside wall of Wolfnights (a sandwich shop currently occupying the space where the cover’s Lee’s Sportswear once stood), Rolling Stone reports. She will begin working at 11 A.M. Eastern time.