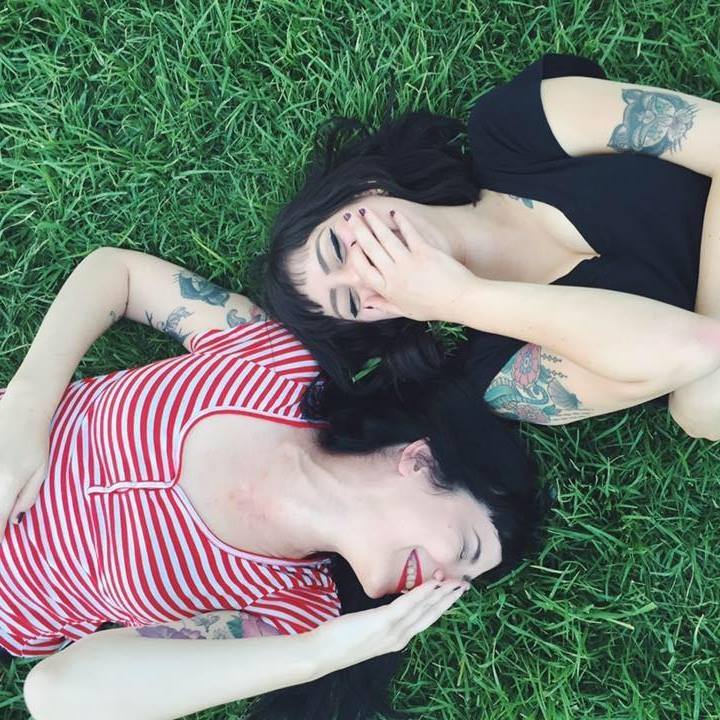 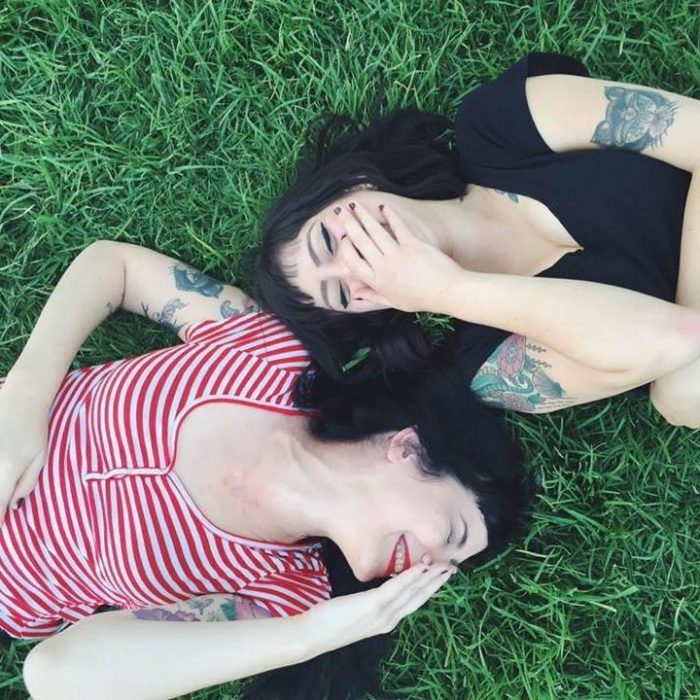 Hailing from central California duo Bearcats released their debut EP on Lost State Records last year. Today (2 September) it’s getting a UK release on the marvellous Frux Tapes so we did a transatlantic Q&A with Lisa Harrison and Lexi McCoy to find out a bit more about their garage pop sound.

LTW: When did Bearcats form? Have you been in bands / in bands together before?

Lisa: We got Bearcats going about two years back when I had joined a band that Lexi had previously been playing with for about a year. We bonded instantly and had really similar taste in music and style. Before long it was just the two of us and we never looked back, we’ve been partners ever since. We weren’t altogether sure if the bass/drums only combo would work but once we got started and began experimenting with vocals and bass effects it seemed to come together quickly, and we were inspired by bands like Skating Polly that created a full sound with a small lineup.

Lisa: Our local music scene can be challenging but rewarding, there is a strong sense of community and DIY ethos throughout it. The lack of venues in the area and rigid noise ordinances in the county we live in make things difficult sometimes but we always manage to get amazing shows together for both local and touring bands.

Do you live now where you grew up?

Lexi: I’ve grown up around this area my whole life.

Lisa: No, I’m from the capital of California, Sacramento. I moved to the central coast in 1995 after graduating high school. A friend of mine had moved to the area a few months before I did and when I came to visit I fell in love with it and stayed.

What was your first experience of live music?

Lisa: My first live show would have been Janet Jackson in 1989, I remember feeling a great energy from her performance and knew that I wanted to be a part of a show like that someday, it was in a huge basketball arena in my home town.

Lexi: My first live music experience was seeing a local band play live at a drum shop here at like 1 in the afternoon when I was in middle school. My dad heard about it from someone and took me because I had been talking about how cool I thought drums were. At that age I was obsessed with the White Stripes and basically wanted to be Meg White, so she definitely inspired me to play drums. I thought drums were such a powerful instrument and loved watching anyone play them so I knew that was the instrument for me.

What did you see or hear that made you want to be in a band?

Lisa: When I saw The Cramps I was 14 and they played a show with Weezer, and The Jesus and Mary Chain it was a radio station festival at Sacramento State University. I guess Weezer’s equipment didn’t show up at the venue in time for their set and this was when they first broke out with that Buddy Holly single. The whole crowd was there for them, they took the stage an hour late and played one song, walked off stage and Rivers said something about shitty equipment. The whole crowd was pissed….then the Cramps took the stage. Holy shit they saved the show, I’ve never seen a more energetic performance from anyone, Lux Interior was an amazing performer wearing a full black vinyl catsuit and high heels. Makeup was dripping off his face from sweat, he climbed the amp stacks like it was nothing. It was magic, then of course JAMC went on and killed it. I knew then that I would much rather be the Cramps, than Weezer.

Garage bands are often centred around guitars – was it a pragmatic or creative decision to write songs in this genre, but without guitar?

Lexi: it wasn’t really a decision, we both knew we wanted to be in a band together and didn’t really know anyone who we would ask to join us. The two of us completely agreed on what we wanted to sound like and do so we were just like “fuck it, we can just be bass and drums” because those are the only instruments we play.

Lisa: We didn’t really ever consider it, I know that garage is typically full of big guitar sound but it doesn’t have to be. We worked on the sound for a long while before we played out, I feel like it’s constantly evolving with new effects that we’re trying. Our vocals have changed a lot and Lexi has taken the lead on quite a few tracks too, it really changes the dynamic.

What’s the typical writing and recording process for your tracks?

Lexi: typically Lisa will write something or I will and then we’ll finish it together. Sometimes one of us will come with something small and abstract and together we’ll make it a whole song. As for recording, we always have people we know record us and we do it at home rather than in a studio.

How important is being DIY to you? How do labels like Lost State and Frux Tapes fit in with that DIY approach? Is there a shared ethos with the labels you’ve worked with?

Lexi: it’s really important to us, it’s basically what we built our band on. We started with the idea of like “we don’t need to know how to play guitar to be in a band” and that we can do whatever need or want ourselves or keep it within our group of friends who are all really talented and help us with things like screen printing, design, recording and music videos. Lost State Records was a local label (which just relocated to Portland) which is basically just a really cool guy named Trey Hanawalt who just wants to put out music he likes and genuinely wants to help out musicians. He’s DIY as fuck! Frux is also super DIY, we’ve been working with Jonny and he just truly cares about helping bands and promoting music.

Lisa: It is essential, we just want to control everything! Just kidding, but seriously, we get to use all aspects of our creativity in the projects that we take on, we have so many talented friends that we work with regularly who help us with all of our crazy creative ideas for the band.

Was Frux Tapes a label you were aware of before they got in touch?

Lexi: we weren’t, but once we started talking to Jonny and looking at the music they put out and all the cool shit they do, we were so excited!!

Lisa: No, but we became fast friends, Jonny has been very supportive and helpful since the day he contacted us. We are looking forward to having our first beer with him via Skype.

You’ve just released your second EP Break Up Stories but it’s last year’s Candy that Frux are putting out over here – how would you say the two EPs differ / are like each other?

Lexi: “Candy” includes the first songs we wrote as a band. We were still trying to figure out how to be a band with just bass, drums, and vocals and what we wanted to sound like. We wanted “Break Up Stories” to sound like what we sound like at shows, so we recorded it live. There’s also more dual vocals on it which we have added to basically every song we play now.

Lisa: Candy seems to be our freshman record, we were just getting to know the ropes of recording and what will work with our sound. Break Up Stories is our sophomore record where we came into our own a little more. We definitely wanted to capture the sound and energy that we hear when we’re in our practice space and at live shows.

Which bands are you listening to a lot at the moment?

What are you planning next for Bearcats?

Lexi: we definitely want to play outside of California super soon! And then get to writing more and hopefully recording our first full album!

Lisa: Next we plan to write more for our full length record, and travel out of state to play as many shows as possible out of our local area.

You can order the Candy EP from Frux Tapes.

Interview by Sarah Lay. Sarah is editor at Louder Than War and you can find her on Twitter or read more in her author archive here. She provides the LTW recommended track of the week on Radio Andra’s The Rumble – tune in Tuesdays from 8pm or listen again.