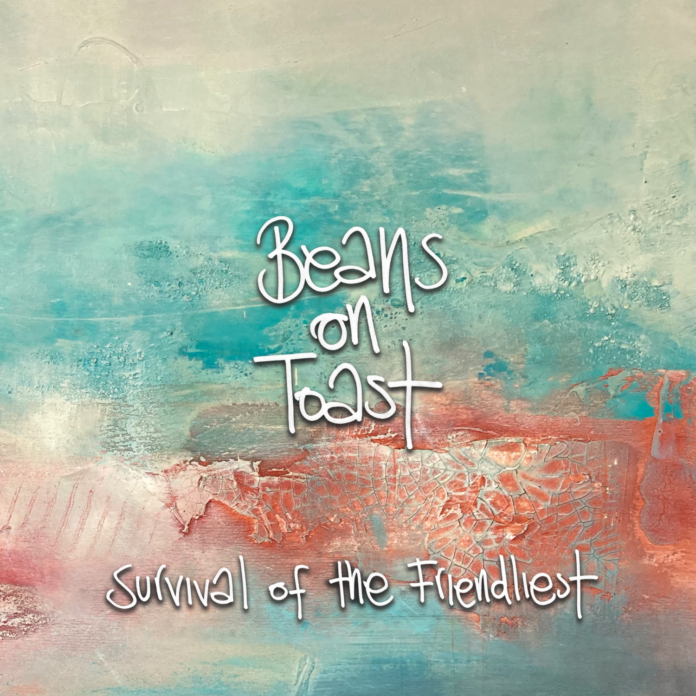 Beans On Toast: Survival Of the Friendliest 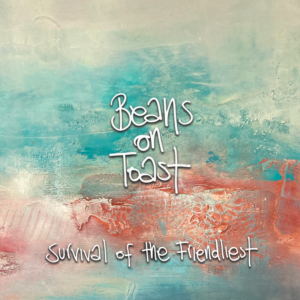 (Self released via Bot Music)

It’s the time of year when we have now come to expect a new album by Beans On Toast as he once again celebrates his birthday on 1 December, and thankfully 2021 is no exception. This time, Ian Corbridge is left with a big smile on his face as the ever-engaging protest singer emerges from lockdown with a positive and uplifting view on all that life and nature has to offer us.

There is little doubt Beans On Toast has taken great strides since Jay McAllister appeared in this guise in 2005 on the local Essex folk scene and his live shows have now become a joyful celebration of all that is great about live performance and audience interaction and his sharp wit and pointed topical and political comment have also become the stuff of legend to his legion of fans.

I get the feeling Beans has always been a prolific writer so the experiences of lockdown over recent times have only served to take this to another level. And the good news is that we all get to enjoy so much more of his finely honed rhetoric as he has become something of an album machine, turning out two albums in 2020 and now another in 2021, in advance of his forthcoming UK tour.

As for Survival Of The Friendliest, Beans has turned his focus towards a more positive slant as he celebrates the world in which we live and let’s face it, this is something that we have all struggled to do over the past 18 months or so as we have been denied much of what we love and enjoy. Indeed with the recent events and debates surrounding COP26 it’s not difficult to agree that we have all taken far too much for granted. So no shortage of inspiration there then.

Beans has always had a warmth and sincerity in his voice that I have rarely heard in any singer since my interest in music began. It’s one that draws you in and makes you listen intently to the words and the message within, more especially when you appreciate that he means everything he sings about. Beans song writing and performances over the years have consistently proved to be both engaging and enlightening and there is no doubt in my mind that he stands up for what he truly believes in.

Beans song writing style has always continued to evolve to fit the mood of the narrative whether it be delivered just with an acoustic guitar as befits his folk roots, with a melodious and catchy rhythm or in a more traditional rock’n’roll format and commonly, each album comes with a core theme that has inspired the lyrical content and this new album certainly is no exception to that.

Opening song, A Beautiful Place, really sets the tone and spirit of the album perfectly with its bright melodious tune and glorious uplifting chorus. As Beans explains, it is “hopeful, optimistic and downright happy. A celebration of humanity at large, the beauty of the world and the randomness of our existence. Who can ignore the message “if you are good to the world it will be good to you” or indeed “we might as well try to look out for one another” given how complicated, confusing and chaotic the world is these days. Folk rock at its very finest and definitely one of my favourite songs of 2021.

Stones is an acoustic take on the wonder, mystery and magnificence that lies within the very core of nature that surrounds us all, but which we generally take for granted. Blow Volcano Blow sets off with a skiffle type beat which leads into a bouncing rhythm as it explores the very heart of the creative world and the sanctity of what we call home, whilst at the same time having a bit of a dig at the concept behind caging animals in zoos.

The positivity continues through the jaunty Not Everybody Thinks We’re Doomed whilst Tree Of The Year offers a more subdued and melancholy view on the fragility of life, rounded off by heart-wrenching strings and as for Humans, it has a joyous and uplifting swagger as it celebrates life itself and I just get an overwhelming urge to go out and enjoy the day for what it is and just take whatever comes in my stride. You really cannot listen to this album without a smile on your face…..just try it.

Beans takes a more traditional folk route through The Commons to explore the impact of land ownership on the common people of England, inspired by The Book Of Trespass by Nick Hayes. Meanwhile a roving fiddle creates a real celebratory mood in Let’s Get Married Again, a love song born out of the wedding bookings Beans took on as the usual festival appearances all got cancelled.

The acoustic driven Apples takes us back to the wondrous changes seen through nature, with a moving and reflective spoken word section by Dizraeli. The metronomic beat of Ready For Action hails a call to arms for “an endless search for a passionate cause” and to not just accept the status quo. The future really is in our own hands, and this rallying cry carries on through closing song Love Yourself, a classic folk ballad which encourages us all to have a stronger sense of self-belief and conviction to make a difference in the world.

As is more common these days, Beans has not done all this alone, with Blaine Harrison and Jack Flanagan of The Mystery Jets making a significant contribution throughout. The band is also augmented by Nick Hayes on banjo, Sarah Telman on backing vocals and strings, Rosie Bristow on accordion, Adriano Rossetti-Bonell on saxophone and Graham Godfrey on drums.

As an album written at a time when bad news was everywhere, Survival Of the Friendliest proves to be the perfect antidote to re-energise us all. It not only celebrates the best of human nature but also creates such an overwhelming sense of hope and positivity with its melodious charm and uplifting chorus lines, whilst also challenging your inner consciousness.

From beginning to end this is a collection of songs that will put a smile on your face. It will make you reflect on the world whilst also celebrating life and our very existence. Whatever life is throwing at you right now, if you are searching for brighter skies in the future, go and grab yourself a slice of Beans On Toast.

And don’t forget to catch Beans On Toast live as he starts his extensive tour in Whitstable on 1 December 2021 with all the dates and ticket details available here.

You can buy Survival Of The Friendliest here.