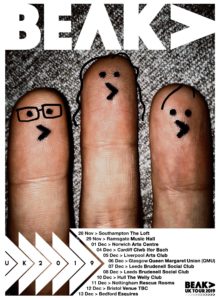 Yesterday Beak> announced that they would be heading out on the road again for a UK tour. The tour is the most extensive that the band have undertaken before and follows quick on the heels of their shorter stint around the UK earlier this year.

2019 is shaping up to be another great year for the trio (Billy Fuller, Will Young, Geoff Barrow) as earlier this year they headed out on the road playing the UK and Europe. The band also released the brilliant Life Goes On EP    which saw the band take their sound further into a new and exciting direction.

Tickets for the tour are available here: https://www.seetickets.com/artist/beak-/580432