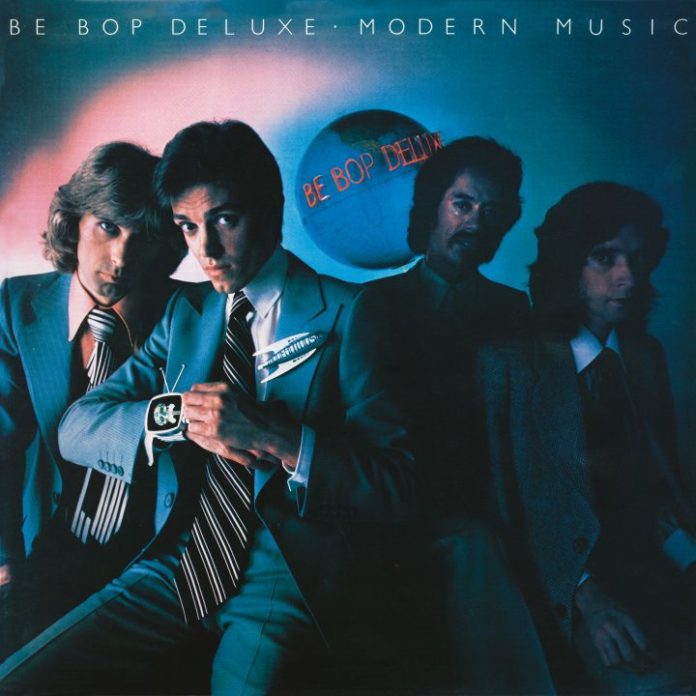 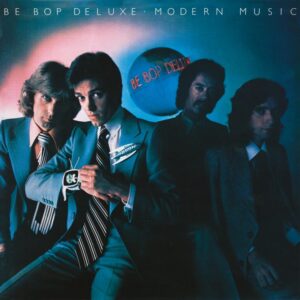 New 2CD set of Be-Bop Deluxe’s fourth album with a bonus disc of remixes. Ian Canty acclaims a band that were a hive of activity in 1976, despite a growing disenchantment with the music business.

From the outside it appeared that Be-Bop Deluxe were an unstoppable force when Modern Music was released. Their third album Sunburst Finish (reviewed here) came out early in 1976 and was a big seller, the band cracking the UK Top 30 with the single Ships In The Night. In September of the same year they were back with a new album, Modern Music, recorded with the rejigged line-up (the incomparable Bill Nelson with a rhythm section of Simon Fox and Charlie Tumahai, plus the newest recruit, keyboardist Andrew Clark). So, on the face of it, all seemed rosy indeed.

However, in the aftermath of the success of Sunburst Finish, a USA tour had left band leader Bill Nelson dejected and disillusioned, particularly with the music business that he got a close-up view of there. He also experienced a large dose of culture shock. Being the artist he is, he sought to use that very frustration in his music, making it a key element in Deluxe’s new record. This manifested itself in the Modern Music Suite of short songs, which made up a whole as part of side two of the original album.

One difference between Be-Bop Deluxe and any glam/prog pretenders around the same time frame is that they were strictly contemporaries of Bowie and Roxy Music, not copyists that took their cues from that pair. They were also canny enough not to let their considerable musical abilites ever overwhelm their songs: they always kept things tight and flowing, their surfeit of ideas being expressed in a thoroughly accessible manner. Added to that, when they were called upon to channel pure rock and roll thrills, they sounded totally authentic, never letting their ambitious ideas or arty aspirations get in the way of a driving tune.

Decking themselves out in business suits on the cover photo for Modern Music was another way of making clear the gap between them and the greatcoated herd. Nelson also had the prescient mock-up of a TV watch his wrist, years before Apple even thought of that. The presentation was ultra-modern, then – so what of the music?

Orphans Of Babylon announces the arrival of Modern Music in a driving and riff-laden fashion, but shooting off at odd angles with an eminently agreeable and crunchy phased attack. The following Twilight Capers is a bit more experimental, having what sounds like banjo picking before conjuring up a glam space atmosphere for a time. There’s even a bit of rumba rhythm in there and it is all done so well.

The album’s single Kiss Of Light failed to follow Ships In The Night into the charts, though it is difficult to see quite why: this is a superior pop song built around a solid street rockin’ basis. Bill mentions in the booklet that it apparently influenced XTC’s Statue Of Liberty, which gives you an idea of how far he and Be-Bop Deluxe were ahead of the game in ’76. After this we’re into the mighty piano rock ballad The Bird Charmer’s Destiny, before side one of the album climaxes with two great songs in The Gold At The End Of My Rainbow and the quite irresistible Bring Back The Spark.

As previously mentioned, side two begins with the Modern Music Suite, Bill Nelson’s meditation on their mismatched US tour which found them having a hard time with audiences who brought tickets for Ted Nugent and Barclay James Harvest. Modern Music itself starts with a “radio sweep” which includes snippets of Be-Bop Deluxe, coverage of the Montreal Olympics, John Peel and Hancock’s Half Hour, before a smart and snappy tune emerges. Novel and imaginative, this is classic Be-Bop. Dancing In The Moonlight (All Alone) reflects Nelson’s feelings of isolation in America, but is a gleaming and punchy rocker which is followed by the similarly themed comedown of Honeymoon On Mars.

Lost In The Neon World is a mere fragment that leaves one wishing for more, it soon gives way to Dance Of The Uncle Sam Humanoids. This one is aimed squarely at the record business, with Andy Clark impersonating an oily A&R man. The reprise of Modern Music rounds off a masterclass in how to couple the experimentalism of prog with the immediacy of rock and roll.

Though undoubtedly the main piece of the album, after the Modern Music Suite there is still much to explore here. It seems that Forbidden Lovers was written on the hoof to bump up the album’s running time, but you wouldn’t know that if listening in isolation, as it is a fine, upbeat and catchy number. Down On Terminal Street deservedly became a Be-Bop Deluxe live anthem, powerful and with a hint of Christmas in those chimes. The LP concludes with Make The Music Magic, a beautifully sung and played song which shows there was still hope in their hearts after the rock and roll cynicism they had endured stateside. Ending the album on an optimistic note was another masterstroke – you could not pin Bill and his band down.

As a bonus there is also the funky sci-fi of Shine, the B-side to Kiss Of Light. The new stereo mixes, which make up the most part of disc two of this set, are stunning. They’re pin-sharp and give the listener clear access to hear the industry, light touch and abundant talent of the band. Though these revisions are usually looked down on a bit, the ones presented here make what was already a terrific album a little bit better still. Shine also gets a new brush up and shave and we get early takes of Forbidden Lovers and The Bird Charmer’s Destiny. The latter strips back to just Bill’s voice and piano and is just marvellous.

Added to the above there is also a nicely produced booklet with a thorough and informative sleeve note (which also has some telling observations from Bill Nelson himself) and a poster facsimile which all go to make for an attractive package indeed. Well done to Esoteric, who do seem to be a dab hand at these kind of things. I look forward a great deal to the final Be-Bop Deluxe album Drastic Plastic receiving similar treatment.

Modern Music was another quality outing for Be-Bop Deluxe and it is done justice by this new edition. The original album sounds good, the new remixes take things up a notch and the poster and booklet perfectly complement the music. Bill Nelson and Be-Bop were at the top of their game in 1976, despite their run-ins with the US music industry, with ample evidence being expertly displayed right here throughout the two CDs. Modern Music displays a supremely talented band at their very best.