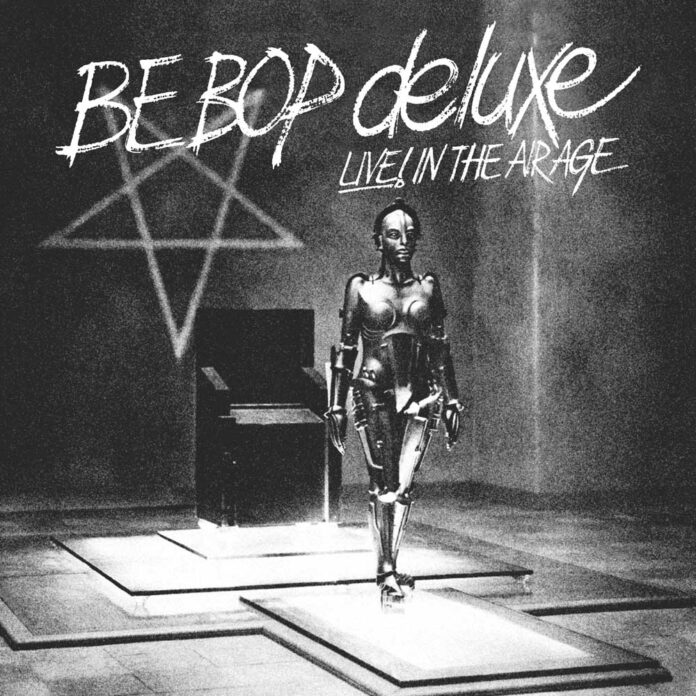 Be Bop Deluxe – Live! In The Air Age 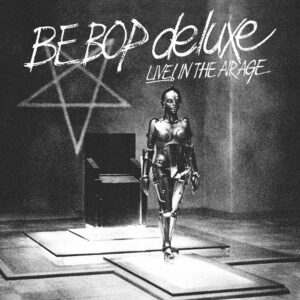 Expanded and remastered reissue of Be Bop Deluxe’s 1977 live album, which hit the UK top ten in that year. The 3CD set which is reviewed here is enhanced by the Hammersmith Odeon Concert taken from the same run of shows and a John Peel Session from January 1977. A limited 15CD edition set that contains every recording available from the 1977 tour is also available. Ian Canty takes in the air…

When Be Bop Deluxe decided to put out Live! In The Air Age in 1977, the only question to ask really was “why had it taken them so long?”. This was because they had been both a draw and a potent, irresistible force in concert throughout their career. Band kingpin Bill Nelson had recruited a fresh line up of the band in 1975 that proved themselves to be an awe-inspiring and exciting prospect on stage.

Their live majesty was one of the reasons why they had glided through into the new wave era as one of the very few older outfits given a pass from the Year Zero brigade. Not for them the more turgid moves of the worst excesses of prog rock – they kept things flowing with a light touch and vigour that made their tough rock thrills all the more effective. Simon Fox and Charlie Tumahai formed a mighty rhythm section and the keys of Andy Clark allowed Nelson the freedom to really cut loose on guitar as only he knew how.

The album Live! In The Air Age consisted of a crowd pleasing set of songs. It didn’t include any really new material and nothing from their latest LP Modern Music, despite it being their best selling collection up to this point in time. Four tunes are drawn from Sunburst Finish, two from Futurama and one from Axe Victim. The other songs featured are the flipside of Kiss Of Light Shine, early number Mill Street Junction from around the time of Axe Victim and Piece Of Mine, which had been a live staple for Be Bop for a few years. The band’s performance formed a part of a multi-media show, with slides and excerpts from Fritz Lang’s masterpiece Metropolis playing a role in creating a different experience from a run of the mill gig.

Befitting a band that focussed so much on the future, the introduction to Live! In The Air Age is the sound of eerie electronic waves crashing in. Then the title track, originally from Sunburst Finish, sets forth in a jamming funk rock style, with synth lines and plus Bill’s six-string pyrotechnics paying off big time. This is followed by their hit Ships In the Night. It is noted in the sleeve booklet that this is Bill’s least favourite Be Bop Deluxe tune, but to my ears it is still a bright as a button slice of top quality street rock with a sneaky touch of reggae rhythm thrown in.

Piece Of Mine is more mid-paced and bluesy and follows the old rock & roll habit of having places for instruments to briefly solo in a vamping section. Sunburst Finish’s opening gambit Fair Exchange bursts through with punky gusto, with racing chords juxtaposed to the slightly more sedate verses that posits the image of Venus De Milo with a knife in her throat. The queasy keyboard line is a wonder to behold here. Next Kiss Of Light’s B side Shine is fleshed out further from its already lengthy funk rock instrumental roots. The locked-in rhythm displayed prove that Be Bop Deluxe were a prog band you could dance to. There is a meditative cool to Futurama’s Sister Seagull, which still manages to jam in some rock-solid guitar work and an explosive Maid In Heaven really hits the mark, coming over like an extra-terrestrial Thin Lizzy.

Upbeat and rousing rocker Mill Street Junction has a real sense of purpose and is endowed with a typically inventive contribution from Nelson. There is a reflective Doors-style electric piano that acts as the introduction of Adventures In A Yorkshire Landscape, which helps to form what a textbook case in laidback cool with more subtle guitar heroics and beautiful rolling keys. Having gone on about guitar a lot, I want to note the great vocal delivery here and together it produces another high spot on a record littered with them. Then Blazing Apostles grants the listener a hard rocking crescendo, a true rock & roll detonation of a performance that makes for a fitting finale.

Be Bop Deluxe exit to a similar synth effect that they entered on and an elated audience calling for more puts the full stop on Live! In The Air Age. Despite the fact that the LP was assembled piecemeal from various gigs on the band’s 1977 tour, which somewhat explains the absence of Modern Music material, it still gave me the feeling of a perfectly paced and executed live showing that sounds even better with the new remastering job.

Three tracks taken from a January 1977 John Peel session are added as a bonus to this first disc. It is slightly odd that Be Bop elected to record for this radio date old material, with Shine’s funk rock groove being retitled for the Peel Show as Still Shining. But as ever there is great instrumental work to enjoy and a really snappy treatment of Mill Street Junction works very well. It was previously cut for Peel back in 1974, but this newer take is not unwelcome. A chilled and wonderful Adventures In A Yorkshire Landscape is the last of a three song set which didn’t offer anything new, but all the same what is here is very satisfying.

The second and third discs of this set feature the full Hammersmith Odeon concert from 26th March 1977. Mark Powell, who put this project together, discovered when going back through the various tapes of the tour that this one stood up very well. It includes in its second half the Modern Music Suite, plus Twilight Capers, Forbidden Lovers and Terminal Street from the same album. This is something that perhaps helps this section of the set make a little more sense than the track listing featured on Live! In The At Age!.

Disc two opens up with the introduction piece Blimps, with strange mood piano with off-beat accoutrements that help it border on musique concrète. It was demoed for a possible EP in 1977 that never materialised. Making clear the difference between the live album and this live set, there’s talk between the songs and Ships In The Night pops up appealingly halfway through through this disc, with the backing vocals more audible this time around. The setlist is adjusted a bit, with Fair Exchange jumping up the order and being imbued with a tearaway energy that is almost alarming in its impact.

Introduced by Nelson as a love song, Swansong from Futurama makes an appearance. Some subtle keyboard work here plays off nicely against loud rock guitar and the odd rhythmic base, with the slower, more reflective sections offering a contrast with the more rock & roll bits. Bill rallies at the BBC before a terse and impressive Maid In Heaven and the funk work out of Shine grooves along well with audience handclapping audible during the guitar solo. A sparkling Adventures In A Yorkshire Landscape concludes disc two with a flourish.

Live! In The Air Age’s final disc features the second part of the concert, which was basically thrown over to Modern Music, bar set closer Blazing Apostles. Though disc two is uniformly excellent, I was more curious to hear this one out of the two as it amounts to what was missing from Live! In the Air Age. Bill prefaces this section to the crowd who greet the announcement of the Modern Music material with warm enthusiasm. After a brief interjection from Charlie and some record company baiting from Nelson, the band power into a cool version of Twilight Capers.

Bits of Hancock’s Half Hour and vox pops come out of tuning across a radio dial and then we’re into the Modern Music Suite, with the full voiced space pop/rock of Modern Music itself. Dancing In The Moonlight (All Alone) follows on with some fine drumming a feature and Honeymoon On Mars is “out there” enough to give any would-be futurists a run for their money. Lost In The Neon World briefly shines, before Nelson’s guitar fleshes out Dance Of The Uncle Sam Humanoids. Modern Music returns to end the suite and I had to conclude it worked live as a long piece, although I can see why this 11 minute plus effort was overlooked for the Live! In The Air Age LP.

Forbidden Lovers starts out with dampened guitar before the notes begin to flow and the r&b drive that often powered Be Bop makes itself known. This is a lively rocker that pleases and if the synth intro to (Down On) Terminal Street points forward to Drastic Plastic, further on it has a bit of old school audience participation too. Band introductions and a grandstanding, 20 minute take of Blazing Apostles that is emblazoned with expansive guitar heroics that somehow include the Woody Woodpecker song, end what is a dazzling performance.

Though rabid fans will want to opt for the 15 disc edition, what is included on the 3CD is of the very best quality. Live! In The Air Age itself has never sounded better and the Peel session makes for a good bonus, these studio versions of the LP’s tracks giving one a different perspective. The Hammersmith Odeon Concert sounds great and gives the listener a good idea of the Be Bop Deluxe live experience in all its glory. If you weren’t there you can hear clearly just why they were so highly rated at the time. With Bill Nelson’s input to the project proving invaluable, all things considered this set makes what was already a great live album considerably more appealing.