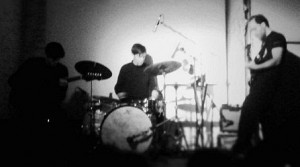 Our man in Berlin Barry Lanigan sends us this dispatch on the experimental music of ‘rooted in metal’ trio B/B/S and one-man-two-bass David Nesselhauf.

It took me a few days to think about how to approach writing about this gig due to it’s experimental nature. I hope I can do it the justice it deserves.

Tonight’s venue is the well-known and not so easy to find, West Germany. It’s a roof-top space in the heart of Kreuzberg, used to be a doctor’s surgery and still has a hospital feel to it. The walls and ceilings remain white-tiled, many chipped. The ceiling panels are almost all gone, exposing sci-fi looking pipes and the tiny bar sells €2 beer. I say it’s hard to find because it is not signposted and one must know the random door of entry off Skalitzer St. and then climb a series of dark flights of stairs to get up there.

And yet it’s always busy and tonight is no exception. I received a NOT TO MISS notification about tonight’s show consisting of two acts: B/B/S with support from David Nesselhauf.

Nesselhauf, based in Hamburg, is a one man bass show. Tonight, tucked into a tiny alcove with punters climbing over each other to get a look in, he has an electric bass and double bass all hooked up to a neatly arranged row of effects pedals. He sometimes uses a bow on each instrument, looping sounds and creating layers of hypnotic and sinister music.

He is out of view for most people listening to him and it’s interesting to see people just standing with a beer, listening and thinking. It’s not abrasive music and one needs to pay attention to it to enjoy it, so the clumsy guy who keeps kicking over an empty bottle is becoming increasingly unpopular. Personally, I think Nesselhauf’s music would be great while creating art.

Headlining band B/B/S take to the main stage immediately after. The three-piece consists of Andrea Belfi on percussion, Aidan Baker on bass and guitars and Miasmah label boss Erik Skodvin also on guitar. Their surnames abbreviated spells…B/B/S. Who would have thought coming up with a band name could be so easy?

Describing their music as being ‘rooted in metal’, from the beginning of their set they treat the audience to an hour of captivating, sludgy and unpredictable music and sounds. Belfi’s brush work is like a swinging watch on a chain and his band mates accompaniments of euphoric and often spooky chimes, groans and primal vibrations match it perfectly.

There is no point in me giving a track by track account as they play the entire set as one song. Looking around it’s safe to say that the crowd of one hundred or so, is in a trance. An Italian guy is doing his best to chat up a blonde near me before being glared out of it and eventually told to shut it before exiting with his ‘tail’ between his legs. God loves a trier.

When B/B/S finish their set there’s a spooky silence in the room. People, myself included, are still a somewhat dazed and can’t believe it’s all over. The previously silent audience now chant for an encore and get it. Like an alarm snooze button I think, ah great…just a few more minutes.