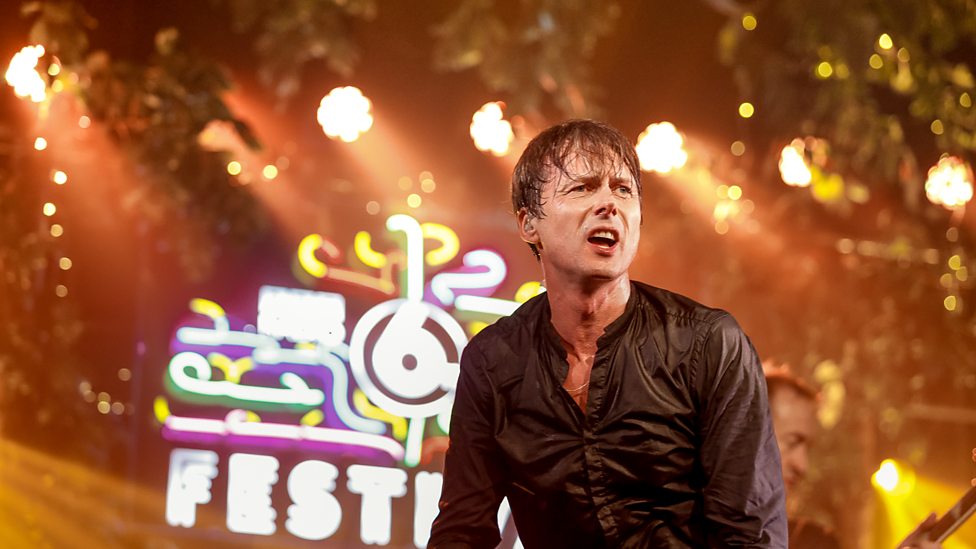 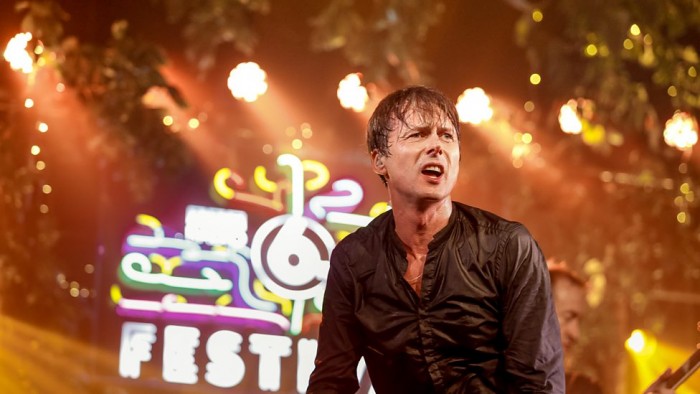 No matter what your thoughts on the BBC are, there is no denying that the rise and popularity of 6 Music has, and is helping support a wider range of music being played on radio and that can’t be a bad thing right? Well, it depends on who you ask and those people have some very valid points about the actual ‘support’ being offered by the station to the local musicians in the towns they have visited over the years with this ‘festival’.

I for one put all misgivings aside, to embrace what the weekend had to offer me and my Bristol brethren. I am not going to do the usual introduction and breakdown of events, instead I am going to go straight in with five of the best that I saw.

1. Roni Size & DJ Krust Presents Full Cycle Records @ The Colston Hall Concourse. Two Bristol Legends back together after a 15 year break gave one of the most exhilarating sets of the weekend in the Colston Hall Foyer (it’s a foyer, concourse is a stupid name) on the Saturday night. The place was bouncing, people filling every available space on the ground floor as well as up every stair and balcony of which there are three rising above the stage. Proof that Jungle is about to make a resurgence? Maybe, with these two pioneers at the helm playing the classics from back in the day as well as brand new productions being dropped, the excite in the crowd was palpable. Bass faces galore!

2. Roisin Murphy @ Motion Main Room. Despite the freezing cold surroundings, Roisin and her band put on a jaw-dropping set in which she performed her songs whilst continuously disrobing, changing, developing and redressing herself with hats, masks, Couture pieces and vintage granny wear. It felt like Performance Art in which Roisin physically manifested her inner diva and inner demons, but no matter how bizarre she tried to make herself look, the songs, her voice and most wonderfully, her personality shone through to give one of the most profound sets I have ever witnessed. Bonkers Disco Bliss! 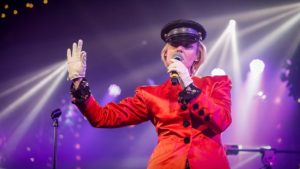 3. Roots Manuva @ Motion Main Room. As opening act to the festival, Roots set the tone perfectly. His warm dulcet tones and meaningful groove hip hop built a fire under our toes (which were freezing in the unforgiving industrial space), lighting up our souls to dance and rejoice, especially when ‘Witness’ dropped of course. Smiles all round!

4. Saul Williams @ Trinity by day. Legendary spoken word vocalist and man of conviction, Saul performed at 11am on Saturday and managed to take us deep into his work. Placing himself into the centre of the crowd he performed an incredibly intimate set from the classic ‘Coded Language’ to his new tracks such as, ‘Think Like They Book Say’. His highly politicised lyrics hold massive weight and show a mind brimming with intellect and passion. Poetic and ethical!

5. Candy Darling @ The Fleece Fringe. Not part of the main event and the only band I managed to see ‘off piste’ but this Bristol band are developing into quiet an experience. Having recently acquired a drummer instead of their usual drum machine, Candy Darling are dripping with the stylish dark tones of their sound and lyrics. Like Motown meets the Velvets, the Blues of singer guitarist, Emily Breeze are heartfelt yet hardened. Cult Leaders indeed! 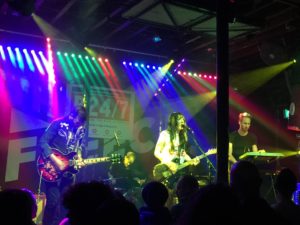 Whilst these may have been the cream of the crop for me, it could have easily been a top twenty with the amount of great bands, dj’s and conversations I managed to see. It did seem rather bizarre to not stagger the performances on the different stages so that many of the acts were clashing, with then a good hour between them with nothing on. It did give the audience time to visit the food stalls and bars laden with tasty goodies and beverages.

The opening concert on the Friday evening was a great taster for the whole weekend with headliners, Primal Scream eventually nailing it despite the dodgy false start and slightly lackluster beginning. New bassist, Simone Butler brought some essential female cool to the primal boys club and the nurturing dynamic between her and Bobby was fun to watch as she fluffed the vocals (sung by Sky Ferreira on the single) on the first attempt of the new single, ‘Where The Light Get In’. This was her first time at singing live with the band and it showed, but nerves aside she is a great addition to the band. 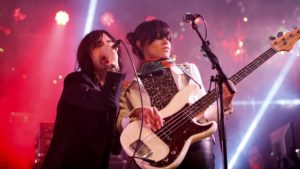 Savages played a blistering 45 minute set earlier in the evening, bringing it loud and hard. Jenny Beth’s ‘walking on the audience’ bit whilst performing ‘Husbands’ always creates extreme excitement giving some intimacy and phone moments to those that got close to the action. Their music might give them a cold hard exterior but as their new material is proving, they have big bold hearts that adore to love. 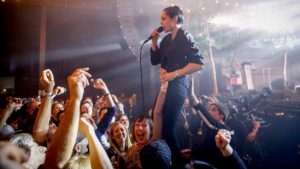 Throughout the day on the Saturday and Sunday, Trinity held some of the more fascinating moments where the weird and wonderful Julian Cope marveled us with his bright yellow Mellotron, Kojey Radical recited some dynamic personal poetry, Geoff Barrow from Portishead talked about his favourite music and Don Letts showed us some exclusive footage from the currently static DJ Derek documentary which he was working on before his disappearance. Floating Points closed Sunday at Trinity with an incredible fluid set featuring eleven members of the collective. 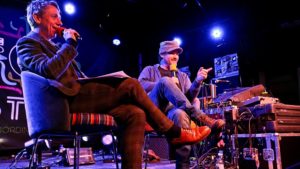 Highlights from Saturday’s proceedings at The Colston Hall include the mighty Misty In Roots whose reggae set opened the day in the Main Hall schooling those present on the foundations of much of the music being played in the foyer (concourse indeed!) by DJ Queen Bee and the 2 Kings Records Soundsystem. Much of the evening was spent in the foyer, as the atmosphere was electric as it built towards Roni’s crazy mental set later on.

Though reluctant to leave, I headed over to Motion to catch Suede’s headline set since they are a band I have never managed to see live and disappointed I was not. The effort and energy lead singer Brett Anderson gave on stage was astounding to watch. A master of swinging a microphone without hitting anyone (although it did come close to bassist Matt’s head many times) and when he shushed the crowd to perform a delicate version of, ‘Sometimes I Feel I’ll Float Away’, their mastery of songwriting and stagecraft just couldn’t be doubted.

Sunday’s highlights included Guy Garvey’s very popular set in the Main Hall. I have never been a big Elbow fan but his performance of solo material brought out the big ‘ROOM FULL’ placards held by the stewards, which meant it was queuing time for everyone. “One in one out mate!” This meant that The Moonlandingz got a full room in the Lantern. An intriguing concept super group of a band made up from members of The Fat White Family, Sheffield’s The Eccentronic Research Council and guest vocalist Rebecca Taylor of Slow Club whose incredible vocals really added to the vibe. It’s a tops off affair for singer, Lias from the outset and as loose and shambolic some of it seems, this is certainly one band to watch out for. Unpredictable with great psychedelic tunes. 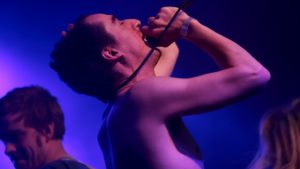 Time to get on my bike to hoof it over to Motion for Frank Turner’s opening set at Motion. Brimming with energy and articulation, Frank is much loved for his protest songs. Like a modern day Billy Bragg, just because it’s political doesn’t mean it can’t be a lot of fun…And it is until I realise It’s time to hoof (there was a lot of hoofing on my part to see the bands I wanted to see) it back to the Colston to listen to Appleblim’s bassy, foyer-shaking set followed by Giles Peterson’s essential soul grooves. During this time, I get a chance to pop through a side door into see both American singer/songwriters Julia Holter and John Grant’s sets in the main hall. Both performances are enjoyable but I’m not too familiar with them so head back to Motion. 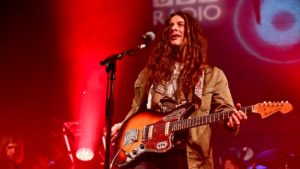 All this running around is taking it’s toll and I find myself utterly bitten by the cold and decide to make Kurt Vile my last stop, and he doesn’t disappoint despite playing a veritable fridge. Having flown over especially for this show, he seems in good spirits sipping from a bottle of wine, doing his friendly silly American thang. Some guy next to me says that, “He’s the new Kurt Cobain!” Well, they share a name but really he’s not punk rock enough, he’s more like Neil Young with his country tinged mellow vibe. It’s a great end to the night for me and I pop off home humming ‘Pretty Pimpin’ all the way.

Overall, I really enjoyed what the weekend had to offer. Missed lots of it because of the sheer size and timing of everything but those that managed to get tickets were treated some of the best music on offer today, with legendary performances abound. Lucky for you, as your probably aware much of it was filmed and recorded for the BBC so head over to the iplayer and check it all out.

Twenty two performances from the weekend can be found here.