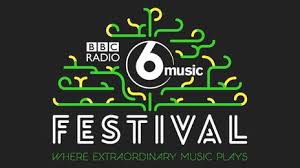 In what is like a 21st century version of seventies impressionist Mike Yarwood ending his TV show by stepping out from behind his impressions and look earnestly at the camera and say ‘this is me’, Damon Albarn makes his solo live debut without the clever 3rd person pop that has made him famous  with tracks from his first ever solo album, Everyday Robots which is out on 28 April.

Surrounded by perhaps the sharpest looking band, The Heavy Seas, to ever stride across the stage Damon is making his live  debut for his new solo project. In flurry of hats, suits, ties and even a tie pin you can see from the distance of the crowd the band are drilled tight as they work round the set of brand new and engaging songs.

It shows Damon’s hold on a generation that he can get away with launching a set of brand new material and hold the audience’s attention and, despite the new material’s pop edge, it’s a deeply introspective set of songs that are the closest that Damon has come to soundtracking his primal core. In Beatle terms this is like moving from Macca’s pop genius to Lennon’s gritty introspection and it gives the new material a real edge.

With elements of dub, calypso, Klassic Kinks pop, music hall as well as a nod to many of his other projects like Blur’s pop nous, the Good the Bad and Queen’s Clash nods and the Gorillaz bric a brac take on hip hop this is a great set of songs that utilise space, dynamics and a natural gift for melody that slides around the never lazy arrangements.

“This is our first ever gig and it’s quite nerve-wracking to be not only playing your first gig but playing it live on radio as well,” he told the audience but there was no sign of nerves from the band as they delivered the songs perfectly with uptempo tracks like Mr Tembo standing out.

Albarn is the headline act as 6music throws its first ever festival – a party a few hundred yards from its Salford base in media city and packs a 4000 capacity warehouse with the first festival of the year. Much has changed at the radio station which was nearly closed by the BBC a few years ago and is now the key listening for indie guitar fans in the UK.

During the day there is an in conversation event with guests like Alan McGee and Tim Burgess and John Cooper Clarke in the hotel next door to the venue before al the action moves to the main venue for a band line up alternating on the twin stages. There are some moments of the sort of indie sludge that passes for alternative music these days but with Drenge’s assault opening up the veining there is plenty of fire to be found in-between the indie plodders. Pop star Kelis makes an appearance and its her biggest hit, Milkshake, that stands out before the Horrors black heart romance cranks the evening to its first overdrive.

The Horrors are about to release a new album and the new track previewed last week shows the band further honing down their skewed drone to a new perfection. Their live set is the same- droning songs, great twists of weird guitar sounds, driving two note bass lines and motorik drumming- it’s the driving death disco of a band on top of their game and band who, in hindsight, are one of the key British bands of the past few years- creating a whole new space for psychedelic tinged boho bands with tight black trousers and winklepickers- in short a clutch of bands who are the best in the UK right now.

It doesn’t seem that long ago when the Horrors burst onto the front of the NME with their explosive hair and garage band rushes- they were dismissed as hype but turned out to be smart operators who were always one inch ahead of their detractors. The only thing that they can’t quite get is the mainstream but their influence is profound and they are a true catalyst band. maybe this new album will be their moment to break out from big cult success to the big league.

Tonight they are greeted like heroes and like Mr. Albarn are making the first footsteps on a new campaign that seems to be thrilling in its expectation…