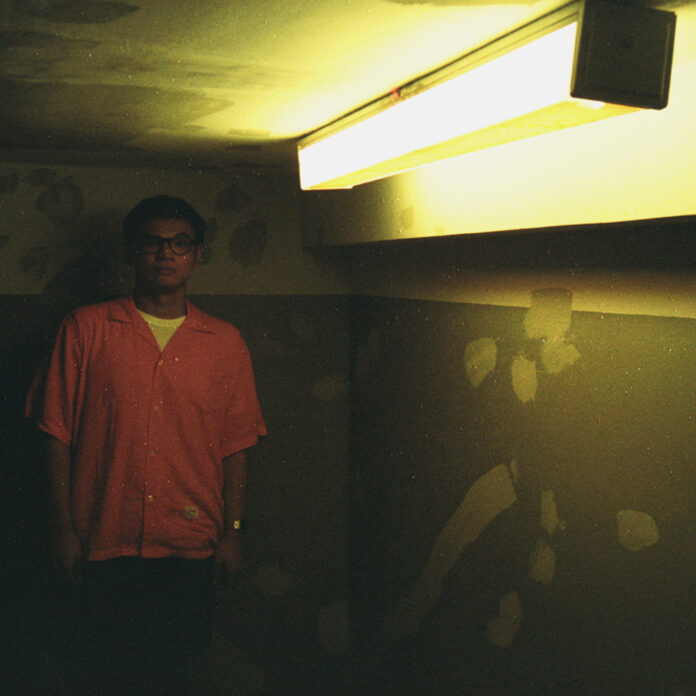 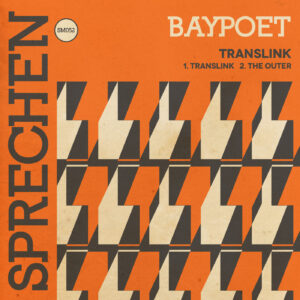 Baypoet’s Translink is rumoured to be one of Sprechen’s favourite releases to date. Perhaps more so because of its adherence to the label’s manifesto which works to dissolve barriers between musical worlds and build bridges between them all. By Ryan Walker.

Sprechen are a record label that want to contribute to a modern musical climate with sonic snapshots from a broad range of artists. Instead of isolating themselves, attracted to one thing, they enjoy providing a shelter for artists who occupy a significant segment on the spectrum, where the generic chains of this label, or that label, this term, or that term, stylistically have a chance of trapping the art in a vacuum doomed to fail because of what is easily identified on the tin (indie, trance, acid and deep house, electro, space disco, kraut, nu-, proto-, post-).

What starts as a trance track ends in an overdose. What starts as deep house ends as a wheelbarrow of bricks and mortar in a shallow swimming pool. What starts as indie ends in a wet dream on a bed of flowers. What starts as kraut turns to a novelty by using German words in substitute for perfectly acceptable English ones coz they look cool and sound smart – ‘wunderkinds’ that play ‘moderne kosmische muzik’ and listen to ‘Kraftwerk’s Die Mensch-Maschine’.

Looks and sounds, thoughts and feelings, can be deceiving when they are sold to us as something untouched since the factory cocooned the latest soup-can of style in the supermarket in their own special brand of shrink-wrap, their own subscription service to a specific Campbell’s playlist.

So, why not see what’s on offer and be taken by surprise? 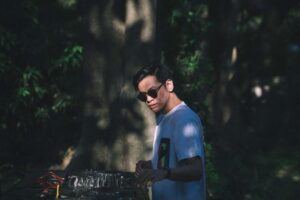 Jakarta-based tunesmith Baypoet is a prime example of what inclusive, interconnected agendas pulsate from within Sprechen’s core. A label that exists to reveal the hidden details in what we find familiar, what we remember as right, as real, and repackage it in something entirely new and noteworthy.

Located in Indonesia and exposed to the UK music scene via his older sister who revealed another world of musical possibilities to him, his music performs as the audible equivalent of that first wall of chemical stench that tugs on the backs of the eyeballs, that electric smell of serotonin in the morning.

Translink then, starts how all good electronic tunes should start – drums. Drums that echo into infinity, the very bones wrapped around the heart and soul of the song. An unrolling of heavy thuds, like a giant’s dense footsteps impressing upon the cyclopean, metropolitan Minneapolis. Drums like hunter-gatherers cavorting disorderedly throughout the sand dunes of the solar system.

A graphic designer and tattoo artist by day, Baypoet spends a majority of his time DJing in the city as an exotic product of what infected the UK decades ago by night. He, and his mixtapes, now act as our correspondent between, and exponent of, Indonesia’s vast capital. The space disco ricochets off the downtown activity performing as a conduit for the entirety of the underground located in the booming nucleus for almost every clubgoer in South East Asia, with a penchant for pumpin’ clubs and dimly-lit caves, an inherent predisposition to throw themselves into the naturally reverberated car parks, and dirty garage extravaganzas.

Untamed energy eating everything. Under the ground. An entanglement of synth bleeps and belches, squeals, and sonic booms. All flying and flourishing throughout the laser grid, a net illuminated in strips of LEDs stretching across unknown parameters of outer space on a crystal beach. High fives whereby the palms meet at warp speed, send shivers down the spines of time the more they clasp together, in turn irradiating a flourish of photoelectric confetti.

Throbbing blobs of bass and stabs of Chicago house piano, the house that Jackin’ built, a nod to the thick building blocs of Norway with spillages of giddy disco madness exploding into the hot cosmos. Endorphin destructors are loaded and unleashed. Many different interlinking textures collide and crack together like scrolling walls of code. 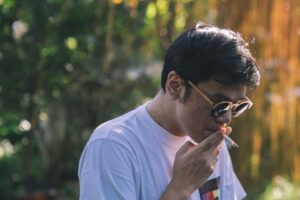 Second song in, Outer is John Carpenter having composed the soundtrack to the original Tron. Patrick Cowley with a hard-on trapped in a Pac-man video game that shoots more pellets than the yellow, pizza man can swallow. 8-bit devices and 909s with minds of their own. The Belville Three reconstructing the Namco Classic Collection Vol.1 with a distinctly Detroit thrust. A driving, juddering jackhammer into the jaws of the dawn. Slowly exploding orchestrations of electronic oomph feed and fuel a humming, mumbling, vocoder that shrugs as it struts into the void. Heavy-handed wallops of bass encourage the trousers to bulge and the bowels to rumble whilst standing at the centre of his own cosmic storm (the back of a black cab) to these instinctually futurist grooves.

Italo-disco promenading through the leftover, industrial honeycombs of an ultra-modern Manchester where the silhouette of the skyscrapers etches itself against the pale faces of towering, concrete surfaces. Pablo Bozzi’s bedazzling morse code melodic eroticism and disco-wizardry is kissed and sugared with classic Jakarta magic.

A record label from the North West of England, Sprechen is a platform to showcase electronic music designed for the dance floor. With a passion for melody, groove, soul & energy with no limitations of style and a diverse release policy.

Available March 7th as a two week exclusive from Juno