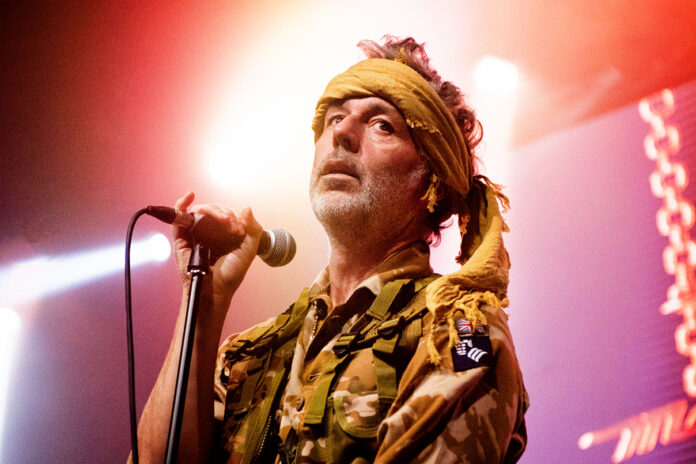 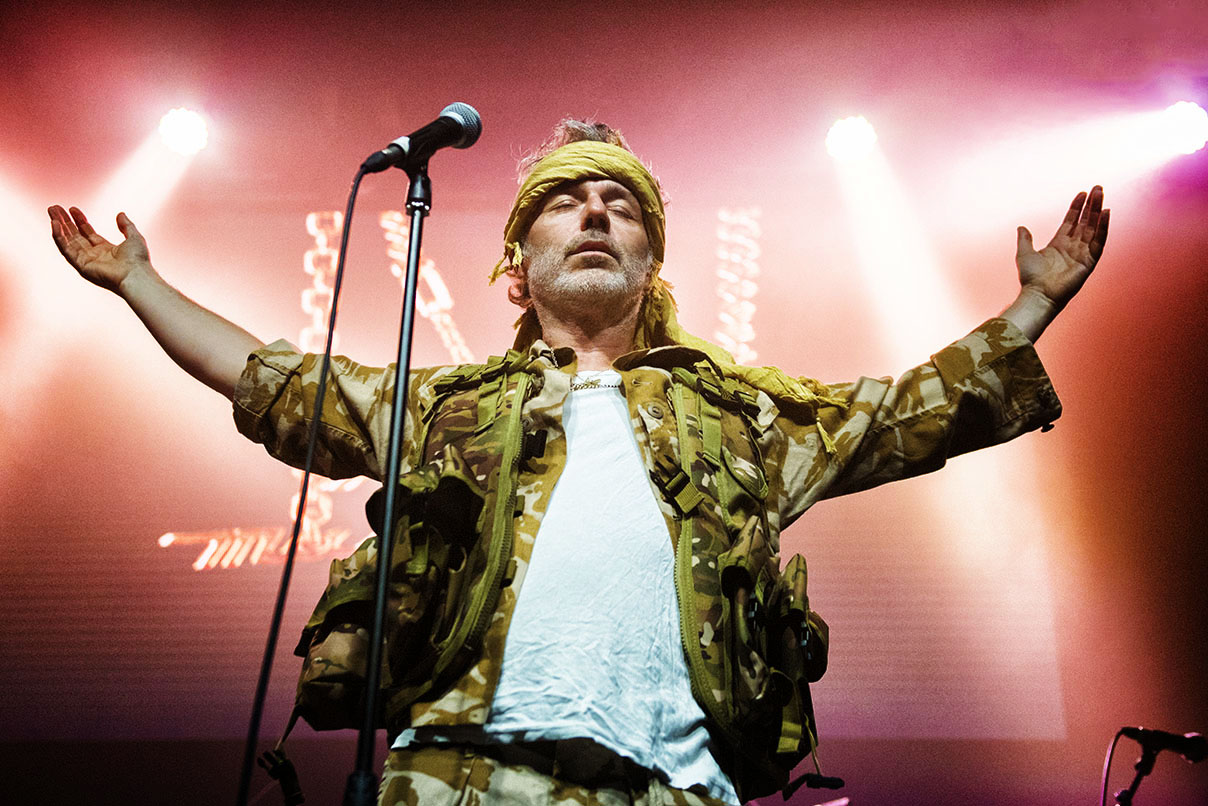 Supporting tonight are fellow Heavenly label mates Audiobooks. A band bursting with ideas. I went in blind and came out baffled. David Wrench and Evangeline Ling conjure up a hybrid of styles ranging from Lydia Lunch’s frantic, frenzied, howls in the raw, sonic scalpings in 8 Eyed Spy to the seismic, sprawling psychedelic mosaics as assembled by the Orb or darker, heavier, grittier-crystals-between-the-teeth workouts of Underworld. 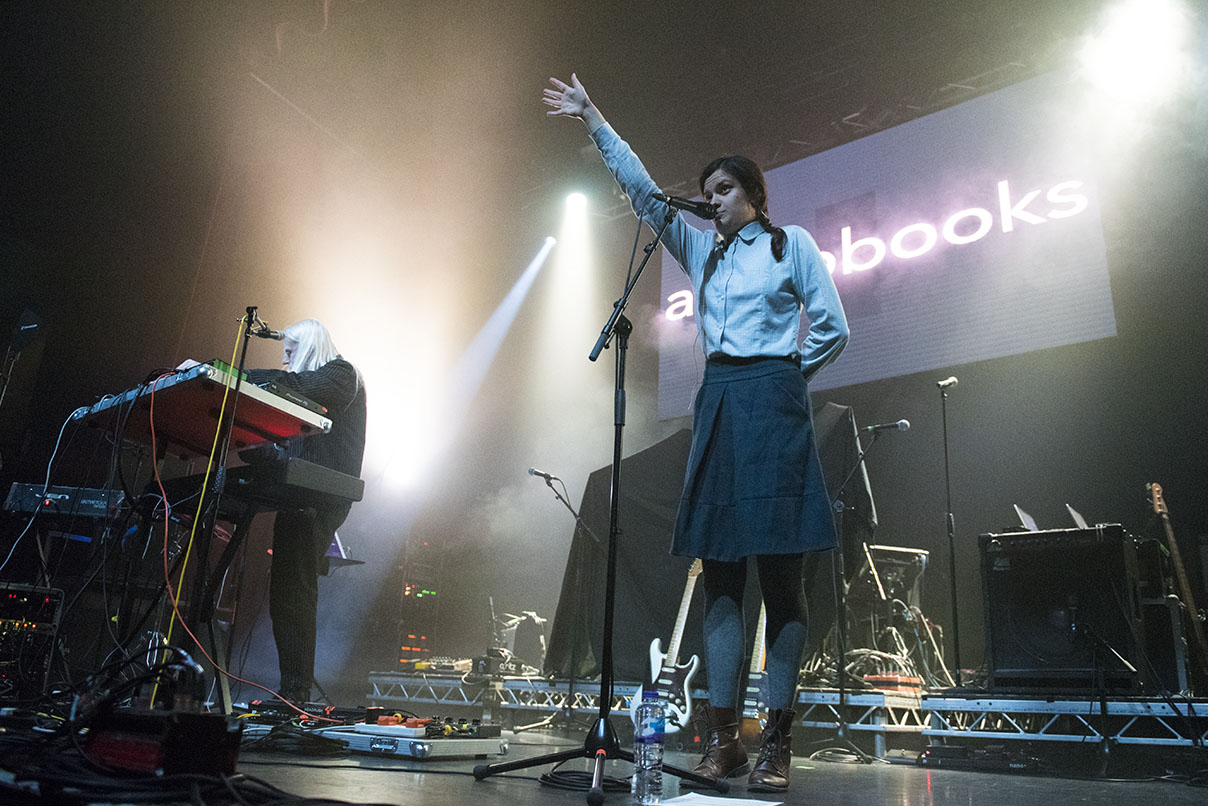 They leave me impressed, amused, intrigued as to what methods are put in place to make sure that whatever is thrown against the wall and sticks is the stuff disposed of. For Audiobooks, the stuff that falls to the floor or drops into the bucket is perfect material to manipulate and make do with. The set is tight, complex, and messy. Its intensely dense, oddly assembled and well-executed. Pop with a capital P, it can be whatever they want and make it work, make it shine, under the watchful, wacky auspice of Pop.

I’m not watching Baxter Dury, I’m watching Mr. Maserati. Baxter Dury has been temporarily stuffed into a box and placed under the bed. There’s a book for sale with his name on it, a signature on a blank page not far past its front cover. But the Baxter we all know is elsewhere.

Some spellbinding showman takes his place. Draped from head to toe in combat clothing, stalking the stage like a snake, slides through the desert. A ringleader with no top hat, but a military helmet in its place. Scars concealed by camouflage. Big beige boots British army body armour. A man held up by some invisible puppet strings and with each twist and turn and fitful twitch, managing to captivate the crowd as soon as new single, DOA, from newly announced best of, Mr. Maserati: Best Of album from 2001-2021, shakes the room in a blaze of grime-inspired, razor-sharp street-smart lyrical agility to slice open the twilight with the grills on show, and the jewellery dangling heavy. 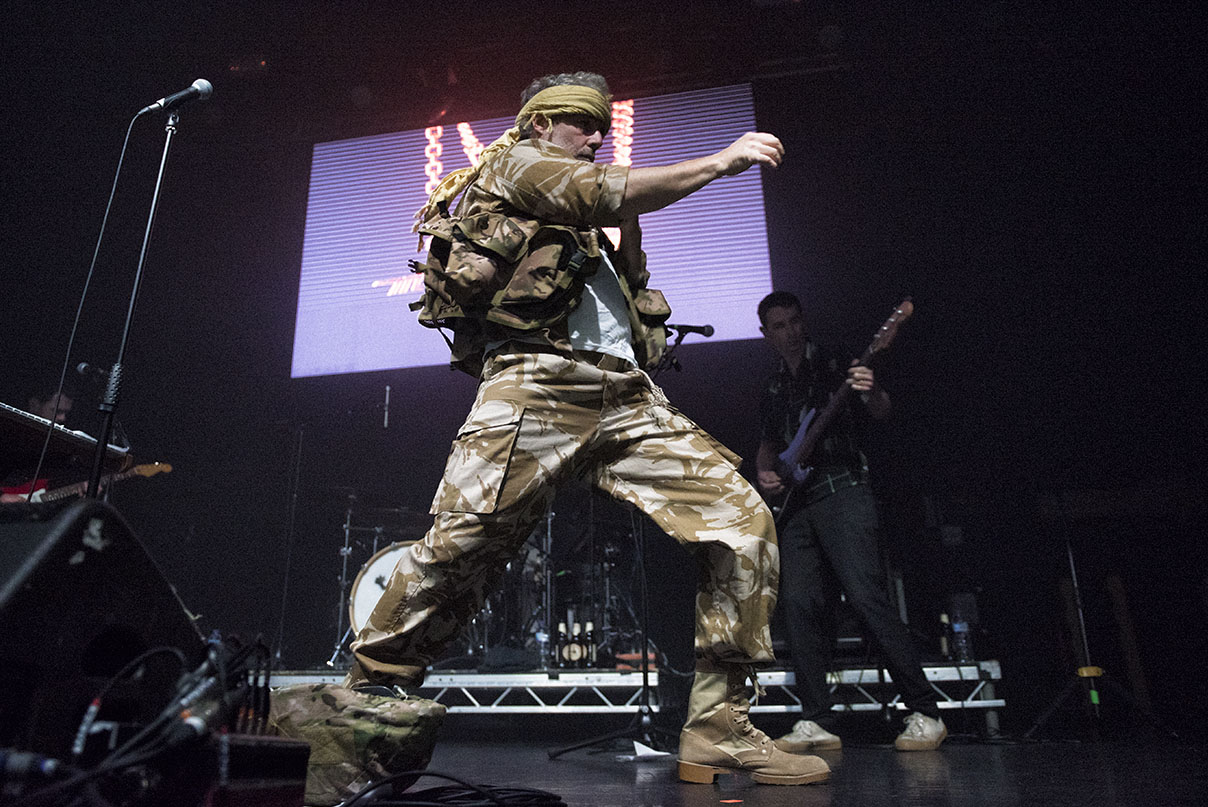 With blood on its bare-fist beats and spit in the wink of any bastard and bystander, this devilish Maserati hangs from the microphone like a man with a crooked posture nailed to his mechanical crucifix fearing for his life with the confidence of a lion tamer that one wrong word will surely tear him limb from limb.

As does keys player Madelaine Hart. A piece of a star’s point stood unpinned to the floorboard planks. An animated statue on the move, a glam ballerina under a bell jar only she can see, stood before a synthesizer and making the harmonies tingle. 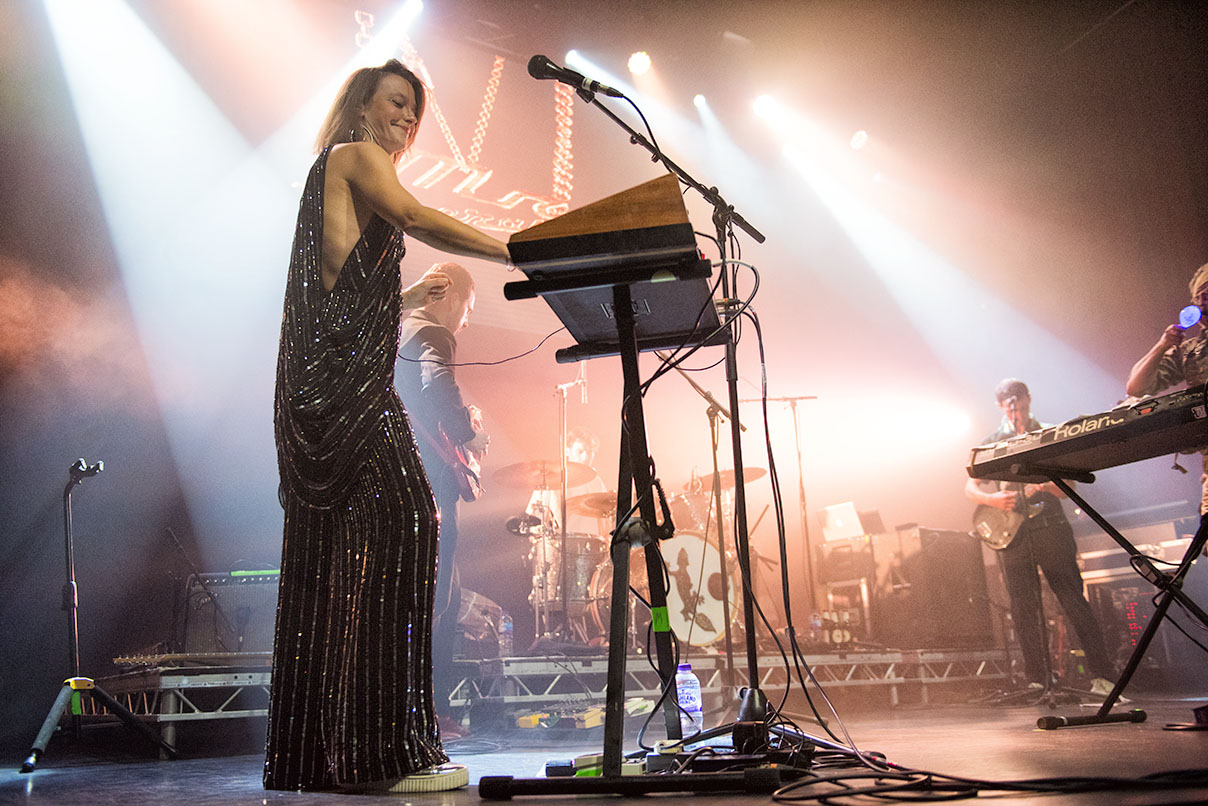 West End chanson, grooves carry moods, whereby Tekelon-Numan meets like Flowers Of Romance-Lydon, lurching and lunging like he could lynch you in a flick of his wrists for all the audience to absorb and adore, to nothing below a communal boil of rapture and reciprocation, tomfoolery and kooky, mechanical choreography.

Maserati is a man fresh from a fight. Bandanna wrapped around his head, glowing maraca used as some invaluable object, a defensive symbol to worship when raised above his loose-screw head. From familiar opener Leak At The Disco, to classic Slumlord, this undesirable Ziggy at the Ritz, who jerks and jolts to the throb mutant-funk of Almond Milk punked up to the extremes with extra phlegm and ferocity in replacement of Jason Williamson with Sleaford Mods, who serenades a sea of coned, cardboard party hats worn by the night chancers, charged when sharing the same space at the same time, as Porcelain lovingly unleashes itself in ripples of delicate, Gainsbourg-in-the-gutter melodies and infectious James Chance-meets-Jim Morrisson alchemical cool, to charmingly cast spells, to tug on the arrow’s tail and shoot it through the sweeps of euphoric air composed of cigarette smoke and dry ice. 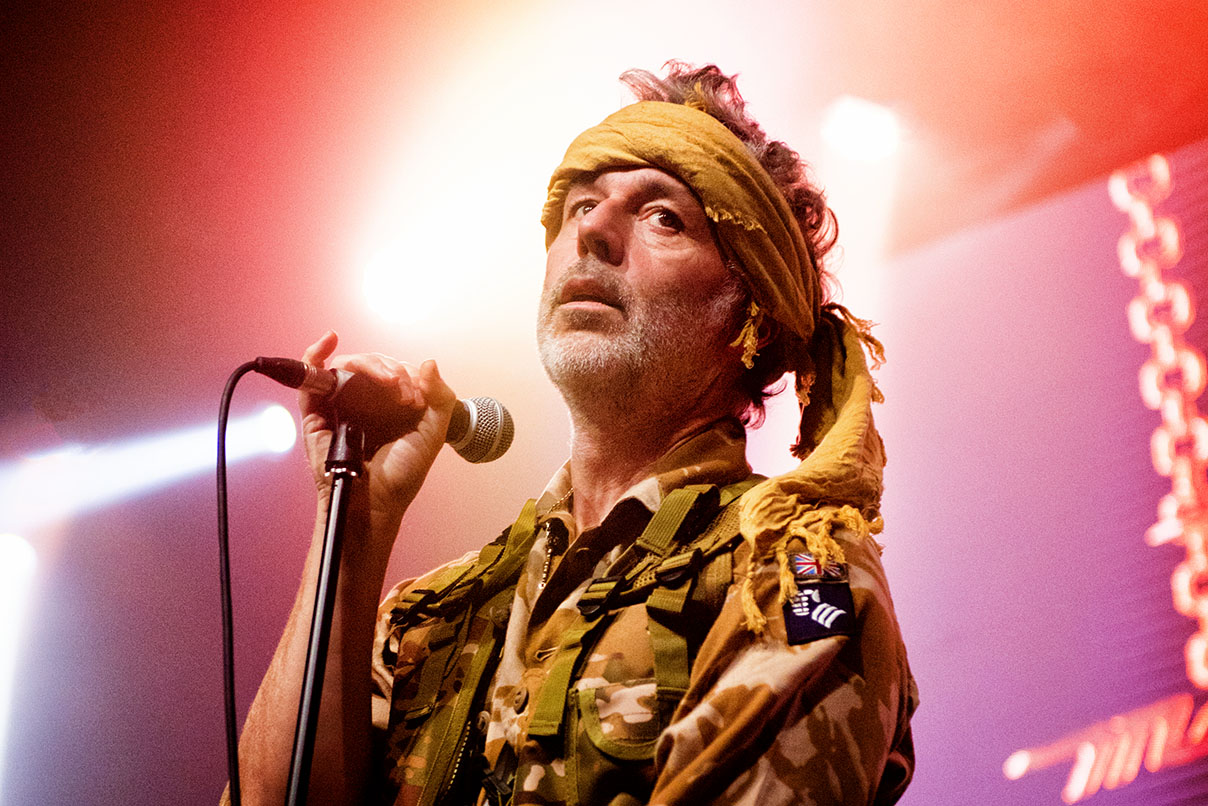 A gangster who glistens the more the audience listens, lingering to each lyrical spillage, each propulsive, slick-garage rhythm, snappy and succinct and spiky in constant uncluttered motion. Engrossing the soul the more Maserati gets closer to the edge of the stage, his puppeteer nowhere to be seen but sweetly felt in Maserati’s delightful Hyde. Detected in the clumsily-calculated, bashful, and brilliant magic tricks like he’s trying to detach himself from something above, and subtle slights of hand tangled in tight wires. Snippets of fidgety insanity make intangible items on offer appear seductive, even more so when he pretends to put things in pockets, to evaporate and disappear with pathos, and bravado interlinked at the seams, adding to the attractiveness of the act, the inability to not feel included and beguiled by the unpredictable wildness of it all. 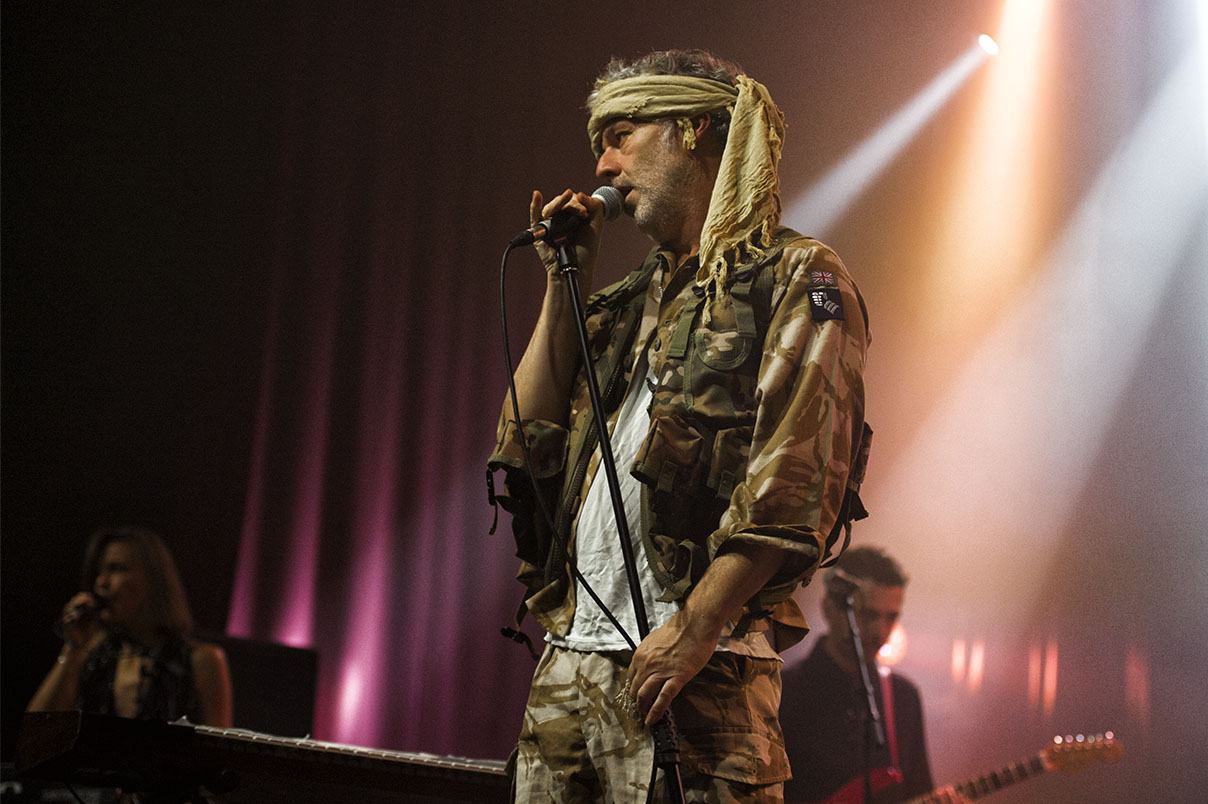 The deranged and disjointed severed soft cells and synth-pop swirl of Pleasure, the always epic psyche-waltz Palm Trees and intoxicating, acid-blast and Jah-wobble throb of Miami with its forceful thudding footsteps and guttural, galvanic charge, primitive Joy Division mini-synth symphonies and mobile phone melodies magnified with Arabian madness, elongated here to really electrify the room into full-on rave all demonstrate the tantalising dynamics of such a small group of people, huddled together in a way which wouldn’t feel so strange in a bedroom shared by a sack of hyperactive beatniks, slapstick swashbucklers hitting pots and pans and generally making a racket from one dawn to another, and succeed in shaking the paper from the walls, the skin from the bones like all good oddball pop groups.

The messiah makes what is uncomfortable and absurd consensual and cool, connected and clever.

But this poor, brainwashed individual, this mortal man exposing the core of his being in the form of odd, little pop songs with enough sophistication, savagery, and swagger to flatten thousands, someone standing before a packed Manchester, leaves the stage, retires to behind the wings. But not after essentially slaughtering the audience with a triptych of tunes that turns the nerves inside out.

He walks off, with his cult. Downs tools, drop sticks and disappears.

But the cocaine man emerges, the real prince of tears. Baxter the gangster in a light blue suit. The gambler in the white vest. The cuddly romantic. Baxter the panther. The aloof poet. A leftover lounge singer at a beat bar looks into the beer bottle and hopes it sprouts spotted umbrellas. Longing for a tomorrow not entirely dedicated to the distractions of lethargy and lament. A venting of vendettas. And we’re all your friends, Baxter. Manchester loves you too.

Ryan Walker is a writer from Bolton. His archive for Louder Than War can be found online here.