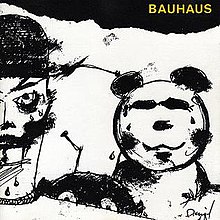 The band’s second album was a bold exploration of their sound and themes and stands the test of time as a brilliant art rock release. Review of the reissue of ‘In The Flat Field’ here.
The band’s decision to remix of many of the key tracks at the eleventh hour was a brave move but one that has absolutely paid dividends, more so now with the current remastering of this album.

Hair Of The Dog opens proceedings with Ash’s frenzied guitar neck slide setting the scene for another incredible lift in sound quality, J’s occasional intermittent vocal now quite clearly audible alongside that of Murphy’s lead which during the second number, The Passion Of Lovers brings out many previously lost vocals that to my ears at least were never there in the first place.

I found myself lost in Of Lilies and Remains due in large to the little Wasp synthesiser that now seems to have stolen the show, taking on a life of its own, it was always there of course but never like this. Much like Dive it’s Ash’s lively and electrifying saxophone on Dancing that catapults this track into another dimension, Dancing been one of the few tracks that remained untouched from Mike Hedges original mix, sounding incredible here. Hollow Hills is perhaps one of Bauhaus most popular numbers, benefitting massively here from the upgrade with the eerie wind and assorted baleful delicacies much more prevalent, along with Ash’s bowed guitar and J and Murphy’s non-lead vocal interjections make this one a definite highlight here.

Haskin’s drums and J’s splendidly funky bass lines open side two with arguably the best (of 3) mix of Kick In The Eye and much like The Passion Of Lovers before it this one is littered with vocals that were so low in the previous cut that they were lost, now gloriously resurrected. The uplift on this number, to this listener at least, was akin to hearing to a forth, previously unreleased mix, another major highlight in this series. The staggeringly disjointed eccentric wasp synth noises that now adorn the ever popular In Fear Of Fear are now augmented with a crystal clear multi tracked lead vocal together with a now audible vocal ‘clucking’ from Ash, all now drenched in an almost overpowering saxophone. But its perhaps Muscle In Plastic with the incredible intricate guitar phrases and the potty piano during the refrain that really have lifted this number, again an often overlooked gem in the Bauhaus cannon. Peter Murphy’s autobiographical lyric is delivered here with such passion & vigour, Kevin Haskin’s talent as a drummer has never been as evident as it is here.

An eleventh hour addition to the album was The Man With X-Ray Eyes and like many more previously mentioned, is another example that now include countless previously inaudible PM vocal interjections thankfully superbly revived in this edition of that (who said?) difficult second. The title track of course closes proceedings and in similar fashion to the bulk of the album, is littered with previously unheard sonic intricacies, the twelve string refrain in particular is now very solid but delicate at the same time Mask is a very, very “busy” track.