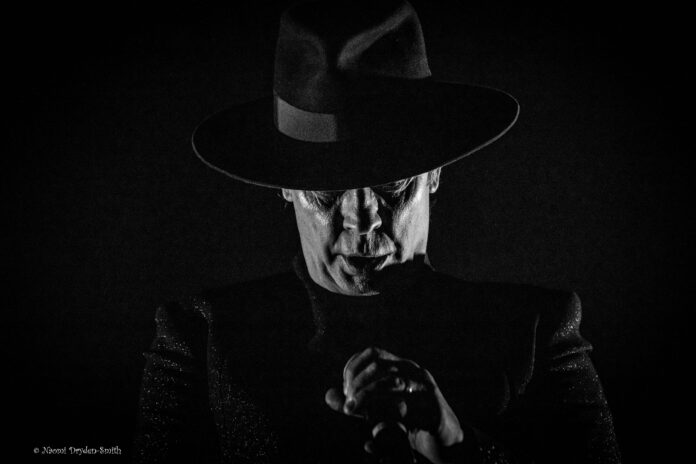 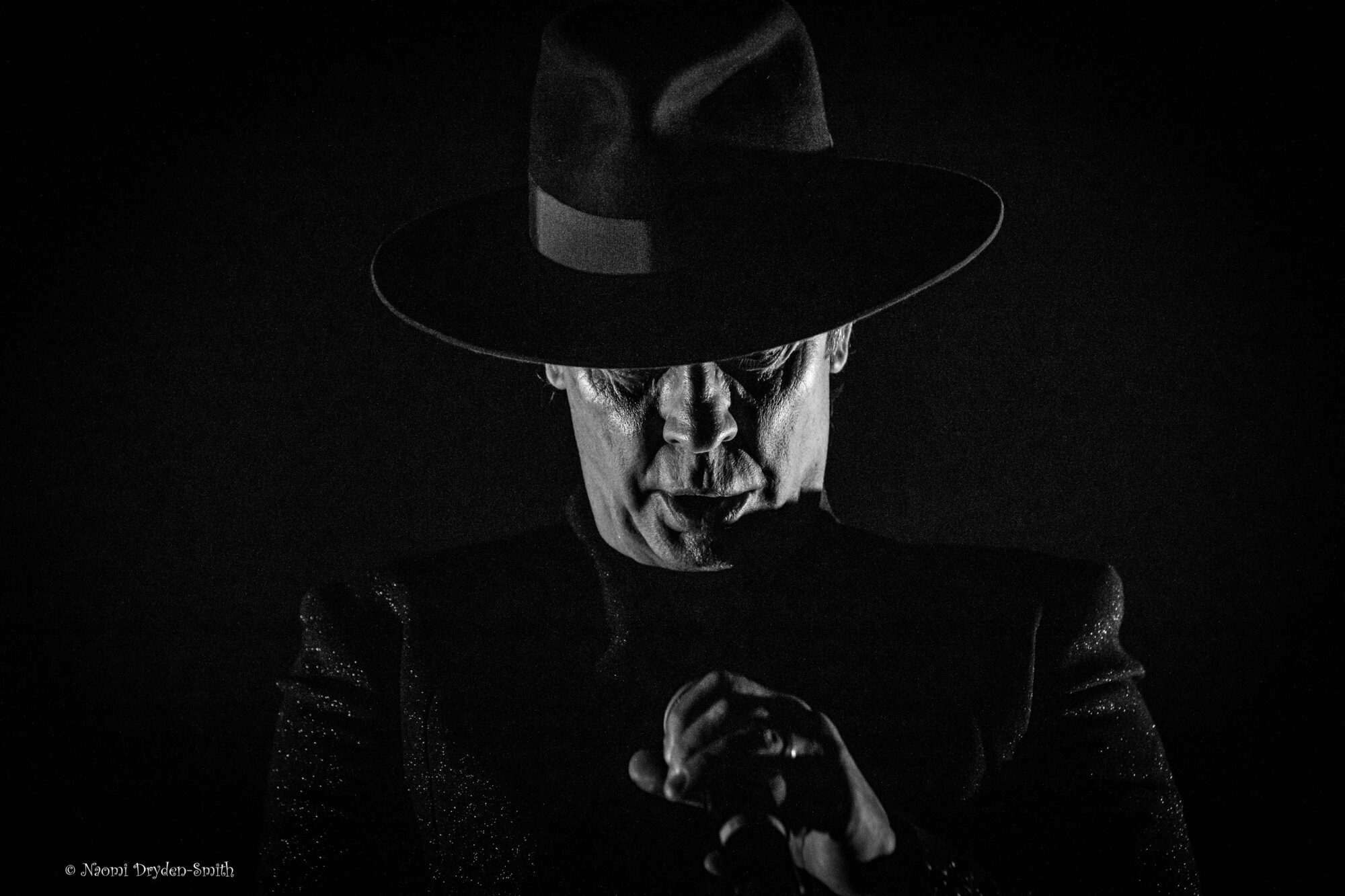 Following up from John Robb’s recent article regarding why Bauhaus were the true children of Ziggy and the most innovative post punk adventurers, and John Robb’s swift summary of the Ally Pally here… Keith Goldhanger attends their delayed London Alexandra Palace show to see if they’re still as good as we remember.

There are many things that didn’t exist back in 1979 when Bauhaus released, to our astonishment, an amazing nine-minute debut tune by the name of Bela Lugosi’s Dead. Mobile phones, Halloween (in the UK), the four members of tonight’s superb support band HOPE and the music genre labelled ‘goth’ are just a few. All these years later, those of us with very fond memories of the shows we saw that followed this release, as well as everything they released after, have gathered in North London’s huge Alexandra Palace venue for a night of nostalgia, hoping to witness everything Bauhaus still have left in their tank after all these years. This could go either way for those of us uncomfortable with experiencing shows by bands we used to love, however it needs pointing out from the start that this show is magnificent. Tonight, we see Bauhaus still being Bauhaus, and not a group of struggling individuals seeing what they can still get away with after years of alternative projects. Tonight, we see the continuation of Bauhaus, still playing the tunes we remember and providing us with nothing new to distract us from the reasons we’re here – because we don’t need distractions when the band have such a back catalogue of classics to play us that we haven’t heard for a while but still know all the words to.

One or two of us are also here to celebrate seeing Berlin four-piece Hope in this vast arena, once spotted down the Shacklewell Arms one Sunday afternoon and caught up with again a few times later around the UK when they returned back sparodically (Liverpool Sound City, Mirrors Festival in Camden). This, one or two of us would suggest, is the ideal band to support the Northampton quartet.

After the magnificent remix of Hope’s Shame by David J last year, some of us see the inclusion of this band on the bill as a small victory for common sense. Hope were born to perform in front of a crowd such as this, and their haunting atmospheric set of songs fit in perfectly with the theme of the night. Coming here from Berlin and driving home again isn’t as straightforward nowadays as it used to be (which is something else that didn’t exist back in the early ’80s) thanks to the state of this country. Nowadays, this involves much form filling, picture-taking of equipment and time-consuming queues at borders just to get here.

Anyone looking for any of the support bands’ merchandise tonight are left with nothing but memories to take home (and the odd phone footage of course) of a superb, intense half an hour that is as beautiful as anyone could possibly offer on a dark October night. Plodding drums, loud atmospheric electronics, a haunting guitar and a voice so clear, intense and captivating it leaves those here glued to the spot, enjoying the moment. Hope returning to these shores this weekend is as great as seeing Bauhaus at the Moonlight Club again in 1980. Hope are doing some great stuff and some of us are now hoping a second album may arrive some day. Seeing this on a big stage and so loud is joyous. 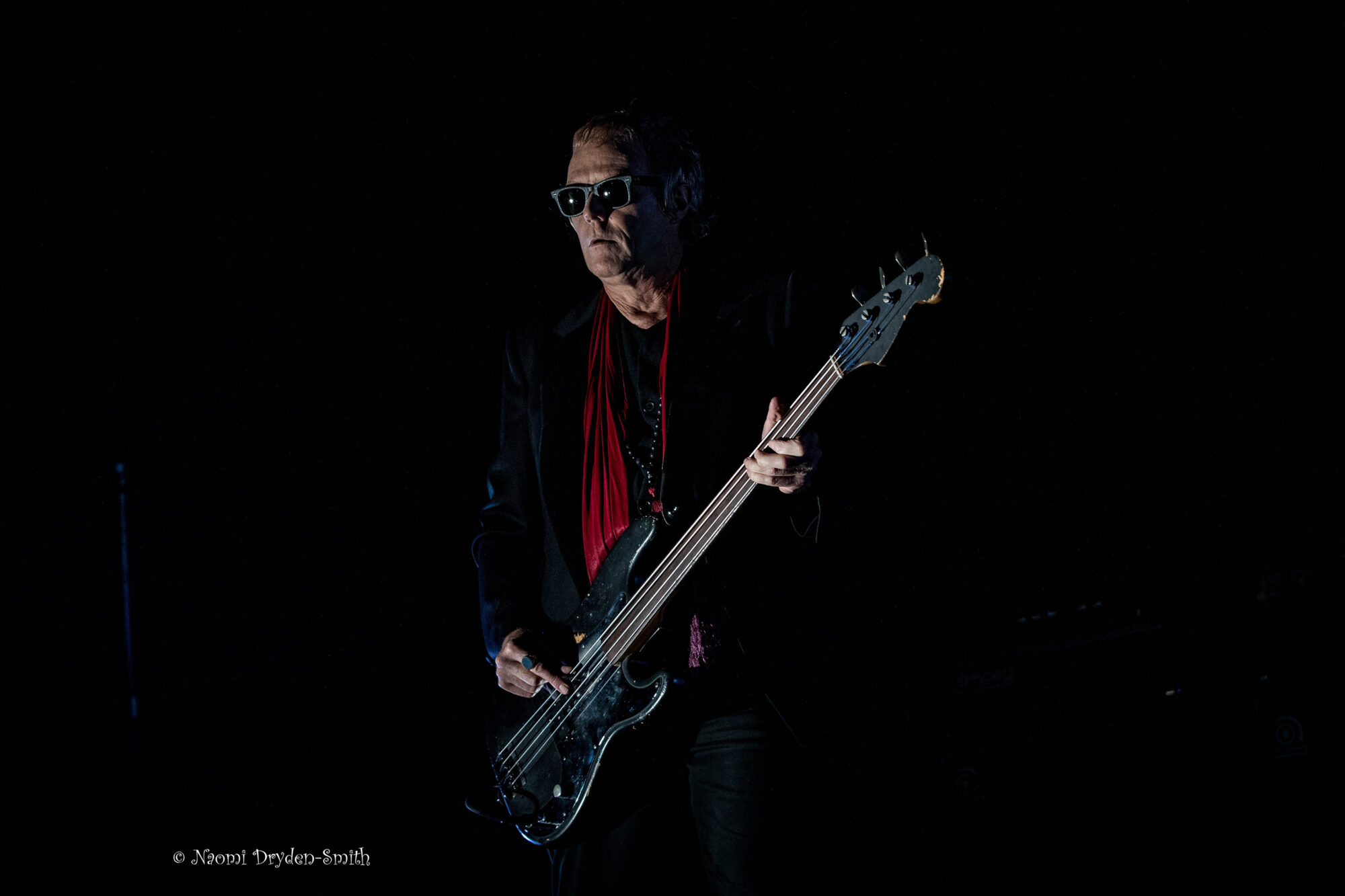 The moment Bauhaus arrive we know it’s them. Daniel Ash still has the hair, shiny jacket and low slung guitar on the right. The sharp-dressed David J in his sunglasses stands over on the left, with Pete Murphy centre-stage as always, with the big hat, cloak, cane, swagger, the voice and the cheekbones. They all have the cheekbones still, as it turns out, and even though the high kicks from the frontman may not be as high as they once were, this band give us everything we came here for.

It’s a slow start but once we’re settled in we get She’s In Parties, Kick In The Eye and Bela Lugosi’s Dead all during one glorious twenty minutes or so. Once this selection is over, we’re beginning to list everything we haven’t heard for decades in our heads and get pretty much everything we can think of for the rest of the evening (In a Flat Field, Spy in the Cab, God in an Alcove, Passion of Lovers…). 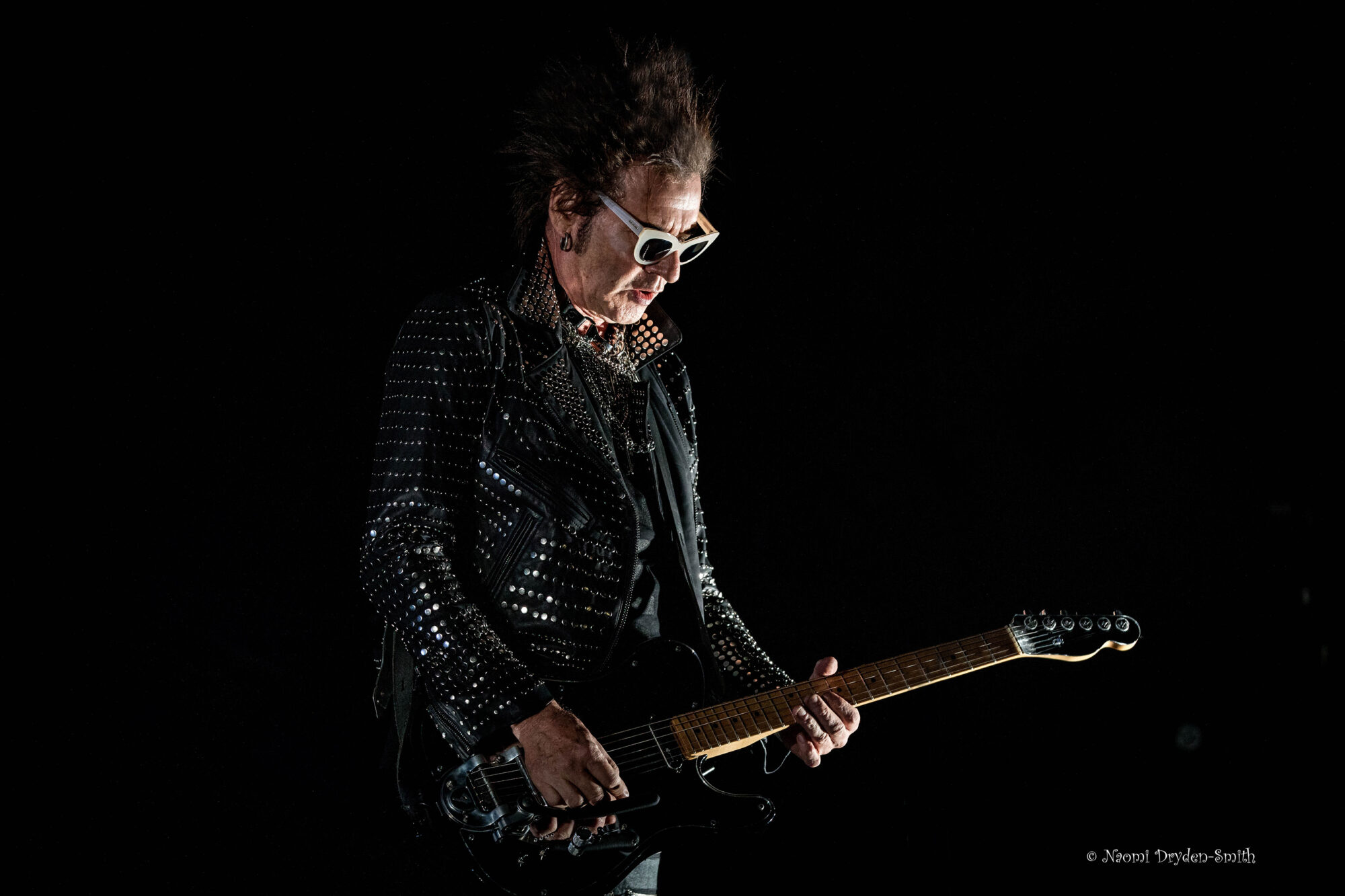 Daniel Ash’s guitar still screams of distorted feedback and reverb, the saxaphone comes out of course during the evening, Pete Murphy keeps himself busy with the occasional electronics, additional percussion and works with the lights more than he feels he needs to work the crowd. Tribal drums, recognisable tight bass lines (Kick in the Eye especially) and the superb (stong) vocals complete everything we hoped to get.

They then return for a final time, acoustic guitars out and serenade us with All We Ever Wanted Was Everything. 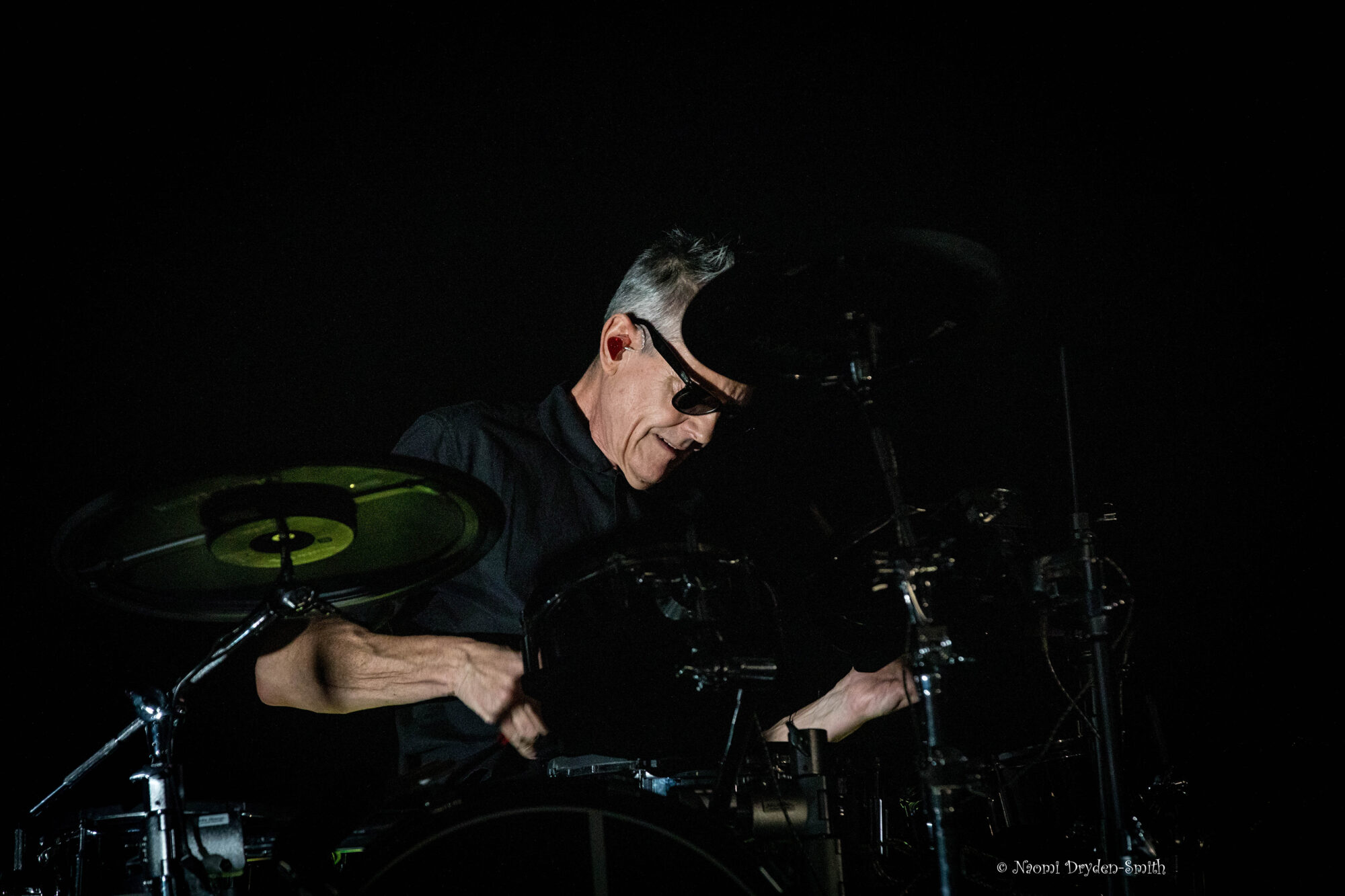 If that’s the end then this was a fine performance to bow out on, if it’s not then hopefully any further shows are incorporated again with bands that may also suit the same audience (this list is huge). A night of great decisions and a fabulous way to spend a Saturday evening. The wait for this to happen was worth it, we got all we ever wanted of course. Nothing more , nothing less. Bauhaus still Bauhaus, that’s all we ever wanted.