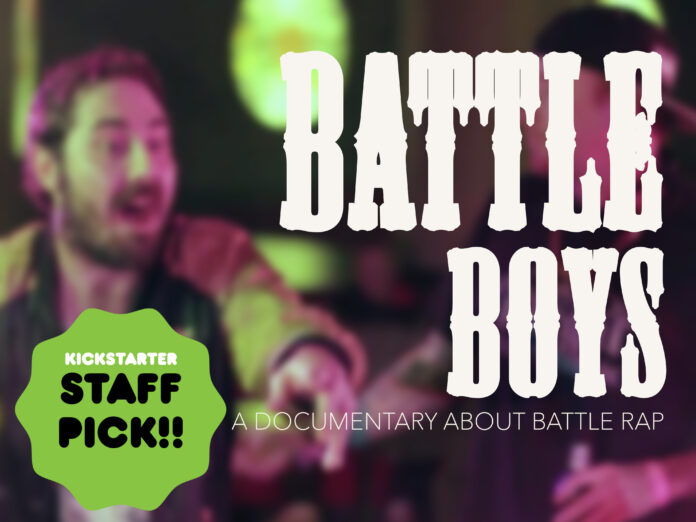 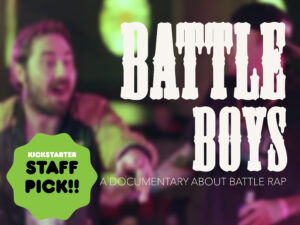 British producer Michael Dorgan is currently working on a music documentary about Australian battle rap – Battle Boys. Here he tells us more about the movement, what interested him about the genre and how you can help get this film made.

8 Mile left an impression that battle rap was brutal, violent, and practiced largely in rundown, post-industrial American cities. A darkly beautiful art form, but somewhat removed from my own life experience.

Twelve years on, battle rap is a thriving global movement. And to my surprise, those that are propelling the movement forward are not gangster rappers, but geeks and misfits – particularly in the UK and Australia.

So, what exactly is battle rap? Well, according to Enigma, British battle rapper and Card Factory employee, it is,

“Just two guys on stage, insulting each other”. Micky Worthless, a half-Indian Londoner, who started one of his recent battles with a rendition of David Gray’s Babylon, thinks it’s,

“Trying to think of the cleverest way to say the stupidest thing”. Dunks, an Adelaide-based battler takes a more psychological view that people spend three rounds throwing as many neatly wrapped insults at each other,

“To make themselves feel better about themselves”.

Speaking to these guys, we realized that battle rap was more than just a demonstration of bravado. More than just gun bars (raps about guns and gun accessories).

That’s why we’re making a documentary about the Australian battle rap scene.

We found that an incredibly diverse crowd populates the Australian battle rap scene. Amongst them are those on the fringes of society – and they not only fit in, but are thriving.

Take Rian Kavanagh, or Manaz Ill, as he is known in rap circles. Originally from Port Lincoln, South Australia, he suffers from a degenerative eye condition that has now left him fully blind. Manaz keeps all of his lyrics in his head and has battled internationally against top tier rappers from Canada, the USA and even the Philippines. Manaz is a gentle and sincere character outside of battling, but says destroying opponents in a rap battle,

“Is payback for being bullied as a kid” and “is a good way of evening the odds”.

The Australian scene also has a rapper with a speech impediment, those from broken homes and a Sudanese refugee. But perhaps more surprisingly, there is unity across economic lines too. Every month or so, the neck-tattooed go head-to-head with PhD students and lawyers, before shaking hands and having a beer together. Nikoteen, a lawyer by day, recently won the Don’t Flop Australia tournament, meaning he will travel to the UK to battle top international opponents.

Adelaide’s James Williams, also known as The Kid, is another unlikely battle rap story. He is a former entrepreneur who grew his real estate business into the number one company in South Australia. But, he quit the rat race to pursue a full-time career as a rapper. The Kid, who wears skinny jeans and uses elements of comedy in his raps, says his experience of battle rap in Australia is slightly different.

“The hate that I received when I stepped into it, most people wouldn’t have come back after the second battle. I was followed back to my car. My girl and me were started on. All sorts of stuff.”

Many Australian rappers refute this claim of violence in the scene. We have spoken to many rappers from different cities, and with different experiences, and one thing is clear: this is a divided scene. There are those like 20-year-old Harjot Singh, an Australian of Indian heritage, who is unhappy that,

“The majority of the time [I’m battling] people like to bring up my race”. Meanwhile, Eljay, a battle rapper from Brisbane, argues that,

“Obviously you’re not going to rock up and tell the bloke he has nice hair. You’re going to use whatever you can – if it’s a different gender or race, I’m going to use it.” However, he notes there’s a difference between what’s said in and out of a battle.

Eljay’s wife is Japanese and he says, “Any battle I’m in there’s the odd mention of it here and there, but she doesn’t take it seriously and neither do I”. He adds that, “There’s never even the slightest bit of racism at any event I’ve been to in Melbourne or Brisbane”. On violence, he has only ever seen one fight at a battle rap event and believes it’s the “keyboard warriors” online that give battle rap a bad name to those that don’t attend events.

There are a multitude of opinions and experiences of battle rap across Australia. We will be exploring these difficult issues from all sides in our upcoming documentary, Battle Boys.

What makes the Australian battle rap scene so complicated to navigate is that, unlike its foreign counterparts, there is not one unified body through which battles are organized.

King of the Dot has regional divisions across Canada and its YouTube channel has had over 74 million views. Battle rap fans know that every battle they watch on its channel will feature the best Canadian talent, and often the best from the USA too. Drake, the mainstream Canadian rapper, endorses the league and has even co-hosted events for them.

By contrast, each major city in Australia has a league that operates independently of each other. This has caused much rivalry between league owners. Many fans only watch battles from their home league. Rappers tend to favour, or be favoured by, certain leagues and not others.

This means that talent and YouTube views are diluted across the leagues. The overall effect is that international viewers and leagues do not know which Australian leagues and rappers to watch out for and collaborate with. Thus, Australian battle rap is stunted, unable to grow into a world-beating scene, on a level with those in the USA, Canada and the UK.

This is the story we’ll be telling in Battle Boys – of the explosion of battle rap in Australia; the amazing stories of the rappers; of the issues that are currently afflicting the scene; and the story of those who are trying to develop Australian battle rap into an internationally competitive scene.

Due to the Australian government’s cuts to funding for film and television, we’ll be partly funding Battle Boys through a Kickstarter campaign. So if you’d like to help Battle Boys get made, please visit our Kickstarter page, donate and share!