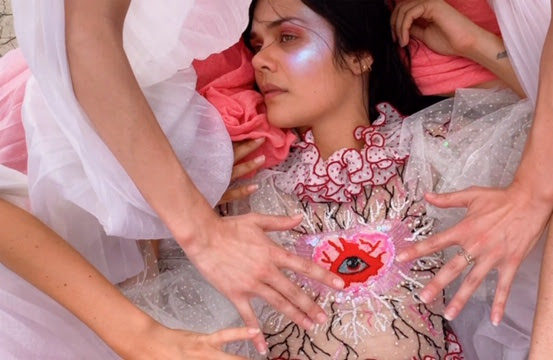 For her new album, Lost Girls, Natasha Khan has dived headlong into the sonic and visual worlds of 1980s teen flicks and their accompanying soundtracks. The result is a beguiling synth fuelled soundscape that feels both timeless and enduring

The music of Bat For Lashes has always been highly atmospheric, encompassing as it often does elements of folk and Fleetwood Mac on one hand and Nick Cave and middle eastern percussion and instrumentation on the other. While Natasha Khan has certainly made use of the synthesiser before on her records, Lost Girls still feels like a marked departure. On one hand it is very much a Bat For Lashes album but, on the other, it feels like uncharted territory.

The initial moments of opening track and first single ‘Kids in the dark’ echo the sonic complexities of Ryuichi Sakamoto’s score for the 1983 film Merry Christmas Mr Lawrence, and this sonic fascination with 1980s films can be heard all over the album, from the cinematic complexities of ‘The Hunger’ and ‘Jasmine’ to the instrumental piece ‘Vampires’, which feels like an unused track from The Lost Boys soundtrack.

This is by no means a bad thing: ‘The Hunger’ is one of the strongest tracks on the album, with a muscular synth pop complexity and pretty percussive detail that only underline its epic nature. It might sound a bit like the soundtrack to an unmade John Hughes film, but it’s also timeless, the sound of imagination and yearning running free. A sense of feeling that is underlined by the track’s promotional video.

‘Jasmine’, despite sharing some of the same musical DNA as ‘The Hunger’, is a lush dance floor tour de force, both mesmerising and vampishly seductive. It features elements of half-whispered spoken word, underlining the 1980s feel and showcasing Khan at her best.

It’s not all brooding soundscapes though: ‘Feel for you’ is a synth powered percussive dance floor filler with a frenetic energy that shows Khan isn’t afraid to have fun. It also favourably reflects her love of the film A Girl Walks Home Alone At Night and its soundtrack. ‘So Good’ is fairly straightforward synth-pop with delicate melodic details and interesting percussion while the ambitious ‘Peach Sky’ has complexity and wistfulness of tone that is excitingly experimental and which perfectly compliments the tentative exploration of feelings that appears to be taking place in the lyrics.

The electric piano-led slice of prettiness and atmosphere that is ‘Desert Man’ feels more familiar Bat For Lashes territory whereas closing track ‘Mountains’ begins as a stripped-down, piano-led song that is intimate in scale but which then gradually builds into a cathedral of sound through added layers of vocal and synthesiser. It’s a fittingly ambitious end to an album that has seen Khan experiment musically and run free with her imagination.