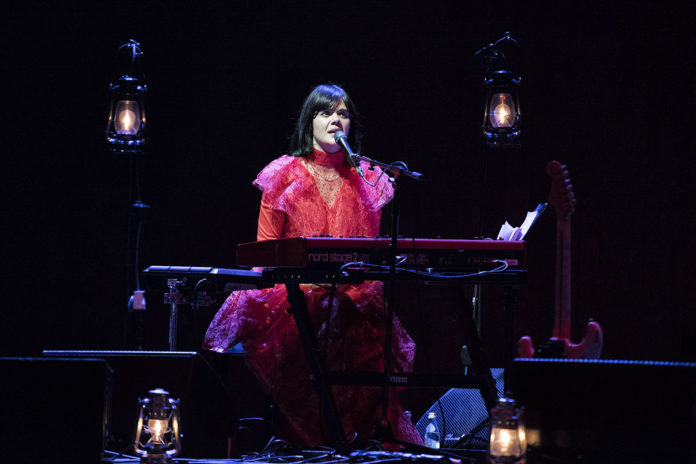 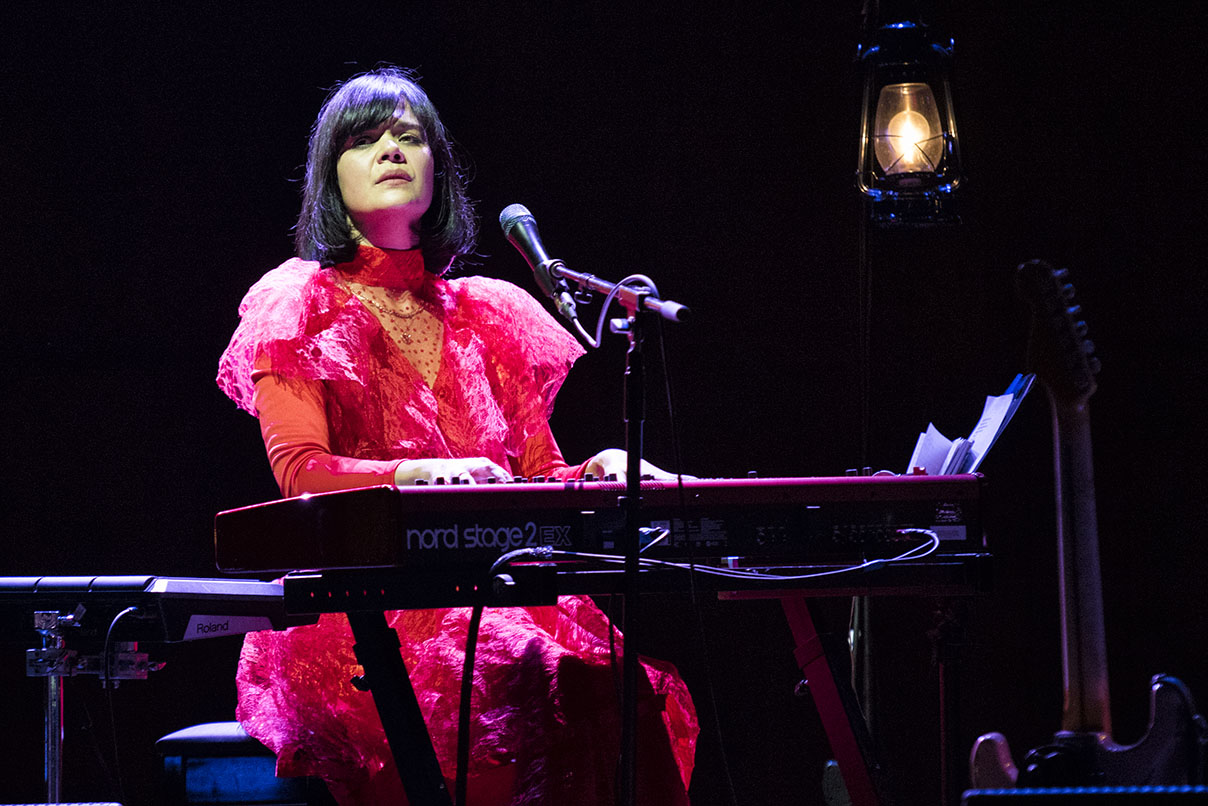 Cazz Blase (words) and Melanie Smith (photos) take another trip to Albert Hall, to witness the welcome return of Natasha Khan aka Bat For Lashes, in support of her fifth album Lost Girls, released in September, to critical acclaim.

For tonight’s intimate performance at the church-like Albert Hall, Bat For Lashes is comprised of Natasha Khan on electric piano, guitar and vocals and Laura Groves on synth and backing vocals. Despite the stripped-down nature of the show, Natasha is magnificent in a red tiered lace frock and heels, the latter items, she admits, making it slightly difficult when navigating the stage of the Albert Hall. In a concession to Natasha’s dress, Laura Groves is sporting a red beret.

Set opener ‘Kids in the dark’ from this year’s Lost Girls album sets the tone of the show, with its filmic 1980s synth pop feel, and throughout the set, Natasha talks about the thought process and evolution behind the album. From a visit to the Lost Boys bridge (hence Lost Girls) to a visit to Death Valley, which directly inspired the lyrical imagery in ‘Desert Skies’, the idea of an album soundtracking a mythic gang of vampire girls from the desert slowly evolved, reinforced by her love of 1980s films and music. 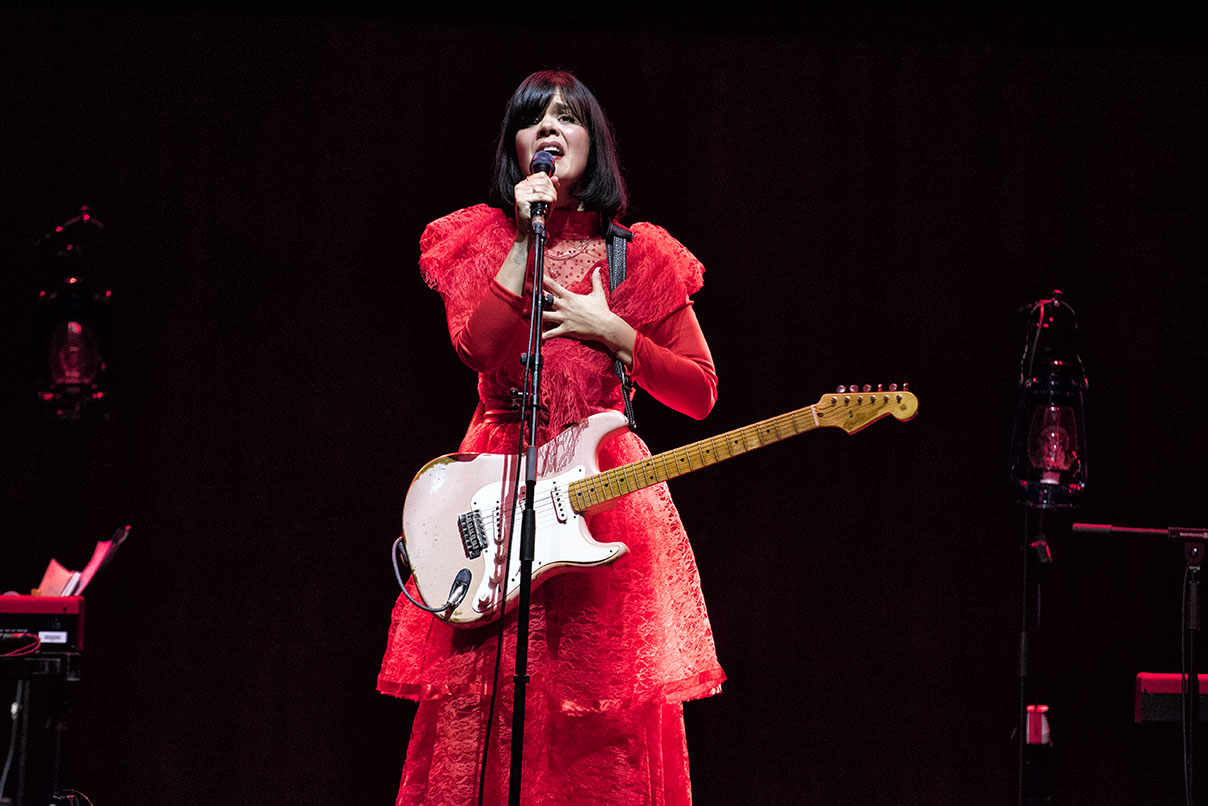 In evoking the world of the Lost Girls tonight, she includes spoken word elements and a series of eighties cover versions, leading to a series of musical experiments that are perfectly in keeping with the Lost Girls album, as well as signalling Natasha’s growing interest in prose and scriptwriting. The eighties synthpop of ‘Feel for you’ is mashed seamlessly into the brooding vampire menace of the A Girl Walks Home Alone At Night esque ‘Jasmine’ and a stripped-down and slowed down version of Don Henley’s ‘Boys of summer’ receives a rapturous response from the crowd.

Natasha’s stage manner is low key but friendly, albeit slightly shy at times. She admits that she is finding these intimate shows to be a bit more nervewracking than she would if she had a full band with her. The ever popular ‘Daniel’, a particularly vivid and evocative single from the Two Suns album, is followed by the heart-on-sleeve ballad ‘Laura’ from The Haunted Man, after which Natasha and Laura depart from the stage with little ceremony. 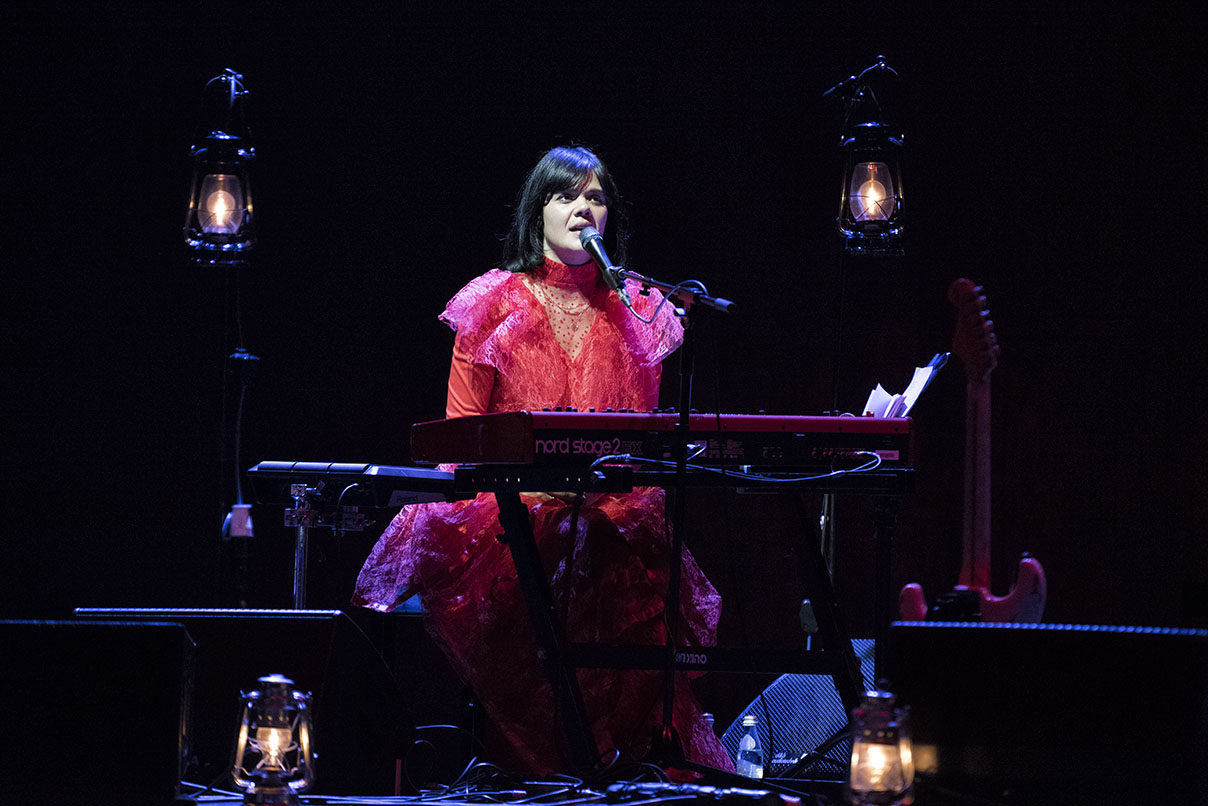 Encores are called for, and Natasha Khan returns to the stage alone and sits down at the keyboard to play ‘Moon and Moon’ from the Two Suns album. Laura Groves returns and they play two more songs, the last of which is a cover of Cyndi Lauper’s ‘I drove all night’. Before playing the song, Natasha salutes Lauper’s many talents, neatly rounding off a show that has tied her childhood and formative musical and social influences to her musical aesthetic today. As they leave the stage for the final time, the lights come up and the PA is playing David Bowie’s ‘Absolute Beginners’, which feels most apt.

You Tube video by orezlyrad