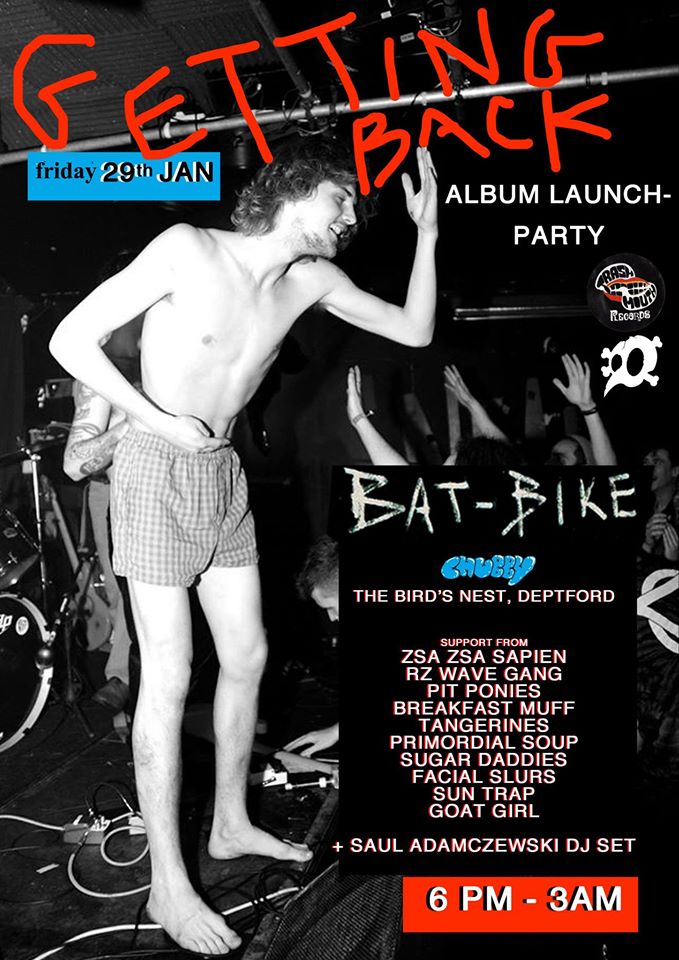 I was pleasantly surprised as I walked into The Bird’s Nest, past the old London bus which acts as a big red bar extension. It had a small stage in one corner, an old fashioned bar and band posters stuck haphazardly on one wall. The relaxed vibe was already perfect before the live music began. I already knew there had been a problem with the late licence, so the 10 band line up, which had been ambitious from the start, was going to have to be off stage by 11pm instead of 2am. Even with the sad loss of Za Za Sapien from the originally planned line up of 11 bands, things were going to be pretty tight. With 20 minute sets and quick turnover planned, I felt this was going to be an interesting night.

The first band, Goat Girl, had the unenviable early slot, starting their set at around 5.30. The girls had a great sound, a kind of slow atmospheric doom indie with hints of garage and surf, topped with loads of reverb and cool deadpan lyrics. Definitely one to watch for the future.

With BAT-BIKE’s strong Scottish connections, we had been promised bands from North of the border. Facial Slurs brought their tight rock riffs with messy edges to the stage, with the angry vocals and electric energy. The short set went down really well with the growing crowd.

There was a bit of a break before the next band, giving Alan Trashmouthrecords an opportunity to extoll the virtues of his specially made, and reputedly excellent, Bat-Bike Sh*t Hot Sauce to the onlookers, but when Primordial Soup came on they were worth the wait. The first song, a pure messy blues rock topped with interesting vibrato vocals led to a more unfocused, grungy number with loads of noise-nik, angst-ridden energy. Again, a real crowd pleaser. 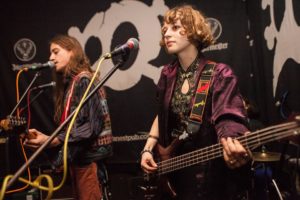 SugarDaddies had a more traditional pub rock feel, garage punk with funk overtones. The shouted vocals on tracks like ‘Withnail’ worked perfectly with the scuzzy rock on offer here. It is rare to go to a night where there isn’t a single band you wouldn’t be happy to catch again, but this was another great set.

With the venue filling up, Tangerines had a decent sized crowd to play to. Their Dylanesque rock vocals had a good blues rock base. As an outsider I didn’t know if they were playing to existing fans, but they had the whole audience on side from the first song and continued with tracks like ‘You Look Like Something I Killed’. The music had a very nice rock vibe and had the crowd dancing. The evening really a great party feel and things were only getting better as people continued to fill the small venue to an increasingly unfeasible level.

The improbably named Breakfast Muff, another of the Scottish contingent, featured good, hefty rhythms and male/female in-your-face vocals, which fell in with the sometimes sharp choppy bass chunk. Good use of wonky rhythms and the trio changing instruments and vocals gave the set further interest, making their stop off on their journey further down South one I was thankful for.

Apart from the head liners, Pit Ponies were the other band I was anxious to see. They didn’t disappoint. Starting with ‘Mountains’, a brilliant track from their recent album ‘Magnificent Second Occupation’, the band followed up with a début performance of the track ‘Rock Climber’, a really strong track with another Pit Ponies memorable chorus of ‘I’m wishing away my life’. More new tracks, ‘Magic of Utown’, ‘Terminal Fool’ and ‘Arrogant and Sad’ continued the powerful set. Giving the audience the choice of the last song, the epic melodrama of ‘Chasing Skirt’, also from the album, topped things off beautifully. A brilliant set. 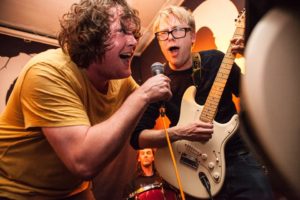 Sun Trap had technical difficulties from the outset, not an easy thing to deal with when the sets are already more of a taster than a full meal. In the end, they managed only two songs, which was a pity because the quality of the music was very good. The first track featured loads of reverb, lush rock and dreamy vocals, whilst the second track had good solid 70’s rock rhythms and drone vocals. It was just a pity the set was cut short.

Sadly The RZ Wave Gang also had technical problems which meant they couldn’t do their set, so it was up to BAT-BIKE to finish off the evening. Things were delayed a bit as Josh Loftin couldn’t locate his guitar, which had allegedly been misplaced by Breakfast Muff, but soon the band were giving us a bit of crazed improvisation to start off the set before a great rendition of the classic ‘Drag and Drop’, a brilliant song found on the Trashmouth compilation ‘Thinking of Moving to Hastings’. Things were getting pretty wild in the crowd as they played ‘Shaun Lemmon’ from the new album ‘Getting Back’. The guitarist from Facial Slur, Michael O’meara, was floating on top of the crowd brandishing a copy of the album, but Josh Loftin’s stage dive was a little less successful. Finishing the set with the excellent title track ‘Getting Back’, with its sing along chorus and gospel feel, time had run out, but the night had been brilliant, despite the short sets and the difficulties of putting on so many different bands in such a short space of time. ‘Getting Back’ is a breath-taking album from the clown princes of South East London. Don’t let the tomfoolery get the better of you, these boys are real talents with masses of originality. I was glad to have been there to witness their set and all the top class acts they had brought to the Bird’s Nest to help them celebrate the release of such a special debut album.

Goat Girl or Sun Trap don’t currently have any on-line information, but information on the other bands can be found at: