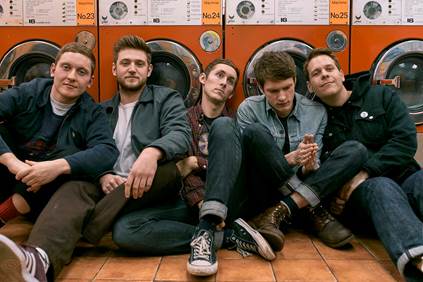 Basement have made a new video for the title track of their 2016 released album Promise Everything.

The video follows the individual members of the Ipswich band performing the track in a variety of everyday locations across the UK – on high streets, in shops and even in Shepherd’s Bush underground station – before the quintet regroup to provide an energetic conclusion. Directed, edited and shot by the band’s guitarist/vocalist Alex Henery the video features additional filming courtesy of front man Alex Fisher and guitarist Ronan Crix.

The video pre-empts the release of a pale green/blue vinyl deluxe version of Promise Everything released on the Fueled By Ramen label on May 19.

Vocalist Andrew Fisher explains, “When we recorded the album Promise Everything we didn’t have the luxury of time. The concept of sitting on songs and making sure we were happy with their arrangement was alien to us. With the re-release of the record we felt it was the perfect opportunity to go back to the song we thought was the strongest and make it as good as we could.”

Currently on a North American tour the band returns to the UK to perform at this years Download Festival on June 11.

You can pre-order Basement’s deluxe color vinyl Promise Everything from Banquet records here.