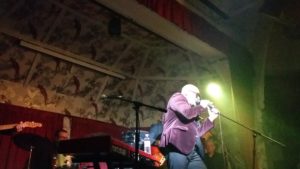 This is a gig that makes you glow.

The songs,the repartee, the warmth oozing from the stage. Like a perfect elixir Barry Adamson is smooth. Jazz devil smooth with a magnetic presence and darkly funny songs about love and death cinematic shooting of people in Didsbury.

There he stands in his crushed velvet jacket, his cactus stubble and his impenetrable shades, oozing a soul power cool and a late night barroom crooner story teller charisma.

The perfect anomaly – a self taught, musical perfectionist whose vision far outstripped his times and who created imaginary film soundtracks and a diverse and highly intelligent run of records that effortlessly embraced several musical styles, Adamson is back and on the form of his life with band who can deliver his vision.

From his voice to his stage presence to his whole thing he owns the stage.
He seems so at home up there with his songs and his billowing charisma that you forget that this is a not common enough foray into the solo world to support a new album and that he has spent most his musical career decorating and driving other people’s music from his youthful forays on bass in the might Magazine to his work with Nick Cave.

Tonight not only does he ooze a crumpled cool he is also funny as fuck and his onstage repartee is warm and engaging and full of a waspish northern wit that has never left him since he quit Manchester decades ago and that razor sharp repartee of ad libs and genial demanour punctuates his songs. Songs that switch from barroom smooth to post punk rushes to a diamond groove takes on Magazine’s cover of Sly’s Thank You (Falettinme Be Mice Elf Agin) to the dark soundtrack stuff that he is semi famed for.

His music is like the combination of car boot sale funk and the best record collection in the world reworked into a new perfection with the true care of a craftsman and a songwriting brilliance and a crafty and clever ear for arrangement.

The crowning moment is his voice – Jesus what great singer – a true northern soul – he croons like a twisted soul singer or like a rasping finger clicking Sinatra with that hard to lose northern thing. It’s all over his new album, Know Where To Run, which he played several songs from.

On the evidence of the gig he is on the same sort of run of form that made his seminal ‘Moss Side Story’ and several of his other nine studio albums, including the 1992 Mercury Music Prize nominated ‘Soul Murder’ critically acclaimed releases.