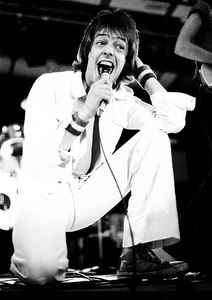 We are sorry to report that Eddie And The Hot Rods singer Barrie Masters has died. His passing has been reported on the band’s facebook page.

Formed in 1975 on Canvey Island the band were the youth wing of pub rock – a supercharged youthful gang of adrenalised droogs who gave that scene an electric shock of excitement that saw them championed by pre punk teenagers looking for a R n R fix before punk arrived.

Barrie was from the old school of energetic daredevil full engaged singers with full on wild performances that became one of the trademarks of the band when they broke through in the pre punk mid seventies (and mentioned here in Chris Packham’s top 10 great punk gigs) . His sinewy presence and wild energy was a huge influence on the upcoming punk scene which saw the band as a bridge between the older bands like Dr. Feelgood and the new groups like the Sex Pistols who famously supported them.

Barrie had a great voice that filled the songs with excitement and melody that made their second single 1976’s Teenage Depression not only a great slice of classic homegrown British rock n roll but with its stripped down chassis and driving delivery a definite precursor for punk. It was also a slice of excitement and adrenalin full of economic and great playing that stands up on its own terms. The accompanying album of the same title charted and they were lined up with AC/DC as a new wave of rock  roll bands perched to take over before history and culture changed.

It’s hard to guess what would have happened if punk had not happened – would the band have been huge instead of much loved cousins to the scene? Still they delivered what is still one of the great anthems of the summer of 1977 as The Rods – the classic ‘Do Anything You Wanna Do’ a song that sums up the teenage experience better than nearly all others and is one of the greatest songs ever written with its huge anthemic chorus and sense of yearning and optimism – it really does send a shiver down your spine decades later and is still one of the great songs of that fantastic year.

The band played on through a myriad of culture and line up changes but always delivered a great set true to themselves and were firm festival favourites with Barrie an affable presence on the scene and still armed with that lived in voice and stage presence.