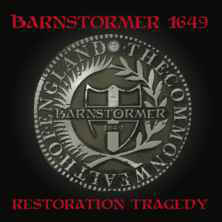 New album by Attila The Stockbroker’s band Barnstormer 1649, taking as its subject matter the time of the English Civil Wars and Commonwealth from 1649 to the Restoration in 1660……LTW’s Ian Canty uncovers a hidden history of insurrection in the UK……

These days the media as a whole tends to give England the image as the kind of place that only gets upset when someone leaks the winner of Bake Off early. Not always the case, but you have to dig back into a fairly unheralded part of the country’s history to find some true rebellious spirits. Generally, from what I remember being taught at school, Cromwell took control after a civil war, had a reign of puritanical terror and after his death the King was reinstated. Then everyone was happy. Though that brief narrative has an element of truth in it, the real story was far more complex and involved real revolutionary thought and action.

After the second English Civil War and the execution of Charles I there was a state of interregnum for 11 years, in theory a period without formal government or a reigning monarch. This wasn’t quite the case as Oliver Cromwell installed himself as “a King without a crown” after he dismissed the “Rump” parliament in 1653. However during the same time-span radical groups like the Levellers and the Diggers pursued dreams of a fairer, more democratic society. The Diggers’ ideas, which revolved around taking back lands seized by the gentry and notions of commune living and grass roots decision making away from bureaucratical government structures, represented some of the first stirrings of Anarchist thought in England. Even more extreme were a loose grouping called the ranters, which is where this album, Attila The Stockbroker and Barnstormer 1649 come into shot…

Attila of course has been a ranting poet since the 1980s, along with the late great Seething Wells, national treasure Benjamin Zephaniah, the very talented Joolz Denby and a few others. He has also experimented with Folk and “early” music forms for a long time (second LP Sawdust And Empire dipped on occasion into both areas), initially solo but for a long time with the band Barnstormer (1649). Last year he decided to work on an entire album that looked at this “hidden” period of English history, when “the world turned upside down”. Indeed after Charles II returned to claim the throne in 1660, an Act Of Oblivion was put through parliament that meant everyone had to forget about the last 11 years (This was the same Charles II who fled the country after the battle of Worcester on a coal brig from Shoreham, Attila’s old stomping ground). Attila also had the ambition to do the same trick with this “early” traditional music as the Pogues did with Irish music, i.e. give it a hefty Punk boot into the future.

Where the Restoration Tragedy differs from the Pogues is that it grafts Punk Rock and Reggae backings onto the traditional instrumentation, rather than Shane and Co who dispensed with “Rock” sounds almost completely, electing to instead inject the music with Punky brio. It doesn’t really matter because the correct balance is struck on this LP and what we is hear is an informative alternative history lesson, a real show of passion and love for the subject and a rattling good listen too.

The album starts with the three-pronged attack of The Levellers’ Trilogy, which encompasses an older Attila Renaissance tune March Of The Levellers, the altogether more Punky Diggers’ Song and The World Turned Upside Down. This is an excellent opening broadside and sets in place the aims of the album in one go: lucid storytelling, keen historic insight, utilising “early” music within a “Rock” setting and presenting a truly fresh concoction for the modern audience. The Monarch’s Way/King Charles’ Cottage relates the flight of Charles II after the rout at Worcester and how it has became a sort of badge of pride for Southwick, where he hid before his escape to France.

One of my favourites on the album is the loopy Reggae/Folk Punk of Wellingborough And Wigan, the novel sound propelling the tale of the Diggers, led by Gerald Winstanley. They were a group who advocated taking back land seized by the rich and parliament, planting crops on common areas and living communally, arguing that the powers that be had denied them their birth right of land to live on and to cultivate food on etc. The landowners used hired gangs of roughs to harass them, destroying their houses and crops and attacking them physically. These actions were supported by the clergy and the courts, but the Diggers did not give up without a fight and Diggers’ festival are held in both Wigan and Wellingborough to this day as a result.

Abiezer Coppe relates the story of one of the original Ranters, the interregnum’s wild children, who caused controversy wherever they went denouncing the church, grandees and all forms of control that stood in the way of them having a good time/life. With a very nice bit of cello, this song is a calm and respectful survey of Coppe’s trials and tribulations, revealing him to be one of the 17th century’s Punk Rockers. Pride’s Purge concentrates its lyrical thrust on the Rump Parliament, the MPs that were willing to see Charles I tried for treason and by such action able to retaining their status in government. Musically this is the most typically Punk Rock moment on the album in sound. The Battle Of Worcester is the complete opposite, using the ancient instrument the Crumhorn in a musical recreation of the last battle of the Civil War – it’s olde worlde chaos!

The Man With Beard wrestles with the thorny subject of J Corbyn esq – but also slips in a salient point about the cult of personality in politics, never a good thing in my opinion. Put someone on a pedestal and the only thing you can guarantee is that they will fall off. This song also touches on the activities of John Lilburne, the Levellers’ leader and campaigner for “freeborn” rights, so doesn’t totally deviate in subject mater. Aptly when bearing personality cults in mind, Lord Protector and Cromwell’s Funeral both deal with the “King without a crown” who ruthlessly crushed people who opposed him and even those who fought alongside him in the Civil War, but quickly came to oppose his brutal thirst for power and taste for religious thuggery.

The Fisherman’s Tale is an oddity on the record, in that it places Attila at the centre. This offering is based on a dream he had one night that he was the man at fault for the escape of Charles II! It is charmingly batty and being no doubt a big old softie at heart, Attila finishes the album with a touching love song to his wife Robina. Luckily enough she has the same first name as Cromwell’s sister, tying it neatly into the project as a whole.

Restoration Tragedy offers a different listening experience to most anything else out there, but a really accessible and engrossing one and not without a little “Black Adder” style humour at points too. Attila and Barnstormer 1649 manage to punch out the tunes in convincing fashion and have a delicate touch when required on a variety of seldom heard vintage instruments. This LP takes you through an often ignored part of history when, just for a while, there was Anarchy In The UK. The true rebel spirit is given a voice today and the message resonates in the world we see around us in 2018.