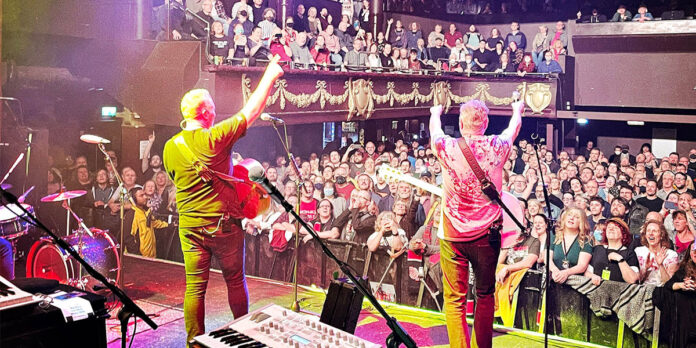 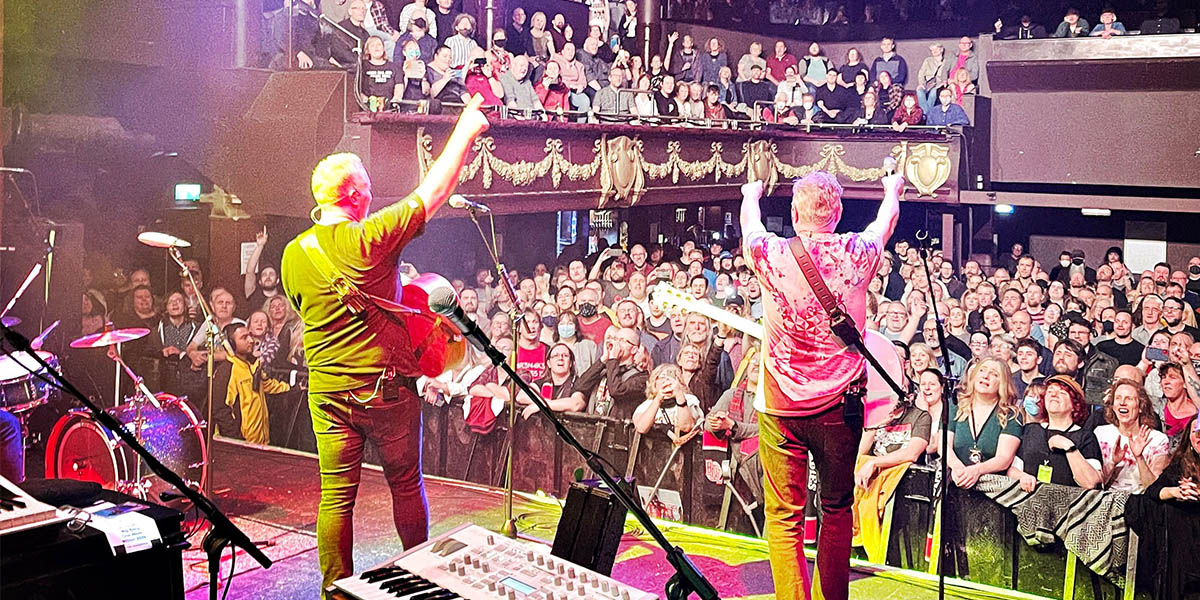 Barenaked Ladies might be battling Covid-19, but their songs remain in robust health at this special Birmingham show. Sam Lambeth reviews.

Tonight is not so much Barenaked Ladies as ‘Partially Clothed Ladies’. Or, as the band declare it, “nearly naked.” For the genial Canucks are stricken with Covid. After bassist Jim Creegan and multi-instrumentalist, Kevin Hearn fell foul of Miss Rona, the rest of BNL have been forced to plough on as an acoustic duo.

Tonight, though, they’re almost at full capacity. Hearn is back in the fold but it means a much different show than what fans expect. Luckily, even though it’s stripped back, BNL know how to put on a show. Not many bands can consistently sell-out UK tours off the back of a one-hit single – BNL have kept crowds coming back due to their sharp, sensitive pop and thrilling, fun live shows.

Plus, BNL aren’t exactly heavy metal. Seeing them stripped back is not too dissimilar to when they’re operating at full capacity. Take away singer Ed Robertson’s trademark verbose raps and the Canadian band are best known for their lovingly crafted, tender acoustic rhythms.

It’s easy to forget that before One Week made them international juggernauts, there was the wistful call-and-response of If I Had $1,000,000. Tonight, it retains the same youthful spark, wry observations and masterful harmonies. Equally, the charming Gonna Walk radiates sweetness and sing-a-longs.

There are songs that are beautiful and sad, the kind that a passive observer of BNL would perhaps be unaware of. Toe To Toe, an offcut from 2015’s underrated Silverball, is contemplative and melancholic, buoyed by Robertson and Hearn’s twangy guitar interplay. The Old Apartment is a masterclass in mournful recollections of long lost youth, while Blame It On Me aches with longing.

Alongside these, however, are moments of great joy and energy. Pinch Me rollicks on an infectious acoustic riff and Robertson’s doleful vignettes. Odds Are’s punchy, droll chorus gets the brimming Birmingham crowd going. It’s All Been Done is jangly and jaunty in equal measure.

BNL continue to show that beneath the seemingly goofy veneer they are a band of serious craft and commitment. Clothed or not, they’re a damn fine live act.

All words by Sam Lambeth. Sam is a Birmingham-based journalist and musician. More of his work for Louder Than War is available on his archive. He also runs his own blog and his music can be found on Spotify

Photo kindly provided by PR and taken by Sean McCarthy