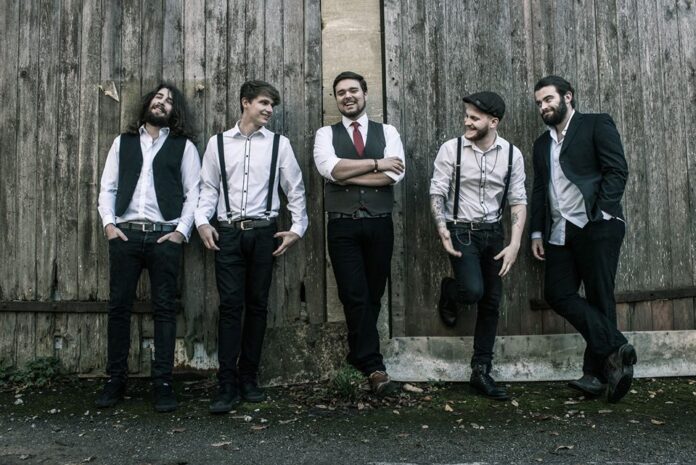 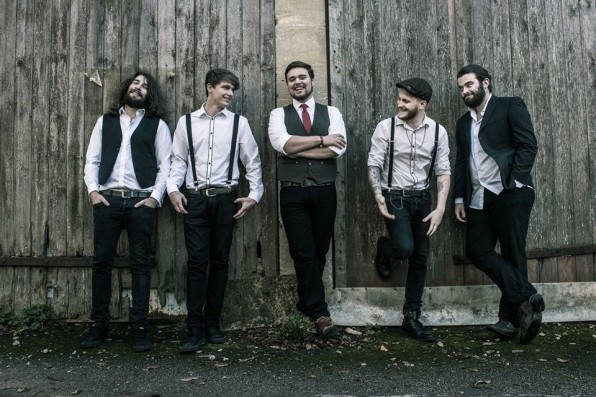 Bare Knuckle Parade started life busking on the streets of Bath, and have fast become the city’s favourite live band. Louder Than War’s Nyika Suttie went to see them off as they start their UK-Wide EP tour.

Bare Knuckle Parade can often be seen busking on the main stretch of shops in the beautiful city of Bath. Armed with a banjo and accordion alongside the usual band instruments they far surpass the men with their amps singing poor cover versions of Del Amitri. These guys are good, and they’re good on stage too. Having first seen them at an open mic I decided to see just how far they’d come as they embark on a nationwide tour that will see them supporting Mad Dog Mcrea and launching their first EP, Iron Lungs.

I arrived at Bath Komedia just as the first act, Armchair Committee were getting started. Hovering on the precipice between hipster and emo they delivered a pure rock bass driven wall of noise that should have got everybody in front of the stage. Unfortunately for the band, who I personally really enjoyed, it was a bit early in the night and people seemed more interested in the bar. I particularly enjoyed their altruistic attitude when it came to selling vinyls: “we have this song for sale, but you should probably save your money for Bare Knuckle Parade.” Awesome. In all they were a great opening act and deserve a higher billing in future.

There was a short wait before the next band, Carousels and Limousines took to the stage. Whereas the previous band might have toed the hipster line, this lot had tripped right over and wouldn’t look out of place in Dalston on a Friday. As they started playing I expected good things, but then the vocals kicked in. I don’t really like giving bad reviews (no really, I don’t) but as much as I wanted to like these guys I just felt it was a bit… safe. A bit Mumford and Sons without the banjo, James Blunt with a better bassline. They weren’t bad, per se, they just weren’t really up my street either. If you like your indie rock with melodies the wrong side of twee then these are probably your guys. Sample quote from the lead singer: “It’s really hot in here, why did I wear a coat inside?” They did however redeem themselves by playing a reasonably decent song before the end, and they even got about half the crowd clapping!

Now I feel like I’ve been very harsh so I should move onto the main event: Bare Knuckle Parade. Suddenly it all got rather crowded in front of the stage as everybody at the gig jostled for a place close to the front to enjoy the action. As the lights dimmed and the music the DJ played gained a decidedly Celtic flavour the excitement in the room was palpable. And then, heralded by an ear splitting scream behind me (yes thank you kind gig goer) the band took to the stage.

I compared Carousels and Limousines to Mumford and Sons, but whilst Bare Knuckle Parade have far more Mumford-style instruments, they couldn’t be more different. The set got off to a rabble rousing start, with foot stomping in all directions and a really appreciative crowd. It’s folk-punk, which is hardly a ground breaking genre, but it has a real substance to it. Celtic Rock n Roll!

Just as I was comparing the band to Gogol Bordello in my head they launched into their cover of Start Wearing Purple, which is truly one of the best covers I have ever heard. Gogol Bordello are not an easy band to cover but Bare Knuckle Parade nailed the gypsy style and everybody had an absolute ball.

There were a few covers in the set, but at the same time most of them were traditional folk songs, which don’t really count as such. Their version of 99 Years (and One Dark Day) is particularly fun, but it’s their original material which really puts them ahead of the game. The lead singer is especially charismatic, winking at people he knows in the audience and maintaining some fantastic eye contact, and it’s this sort of stage presence which really makes you feel part of the gig.

The set finished with the band’s first single Star of Dundee, which quite rightly has had some radio plays recently. The whole audience was singing along and on the way back people were still humming the audience participation part. It was so great that whenever the band asked for people to join in they got it. It made it such an enjoyable gig.

Komedia in Bath is an old, rather ornate cinema with upper and lower levels for watching bands, which is nice but does mean people can choose to be quite separated. I have been to this venue for several events now and it’s certainly versatile; being as good for comedy and cabaret as it is for theatre and music. Drinks are standard Bath prices (so expensive) but cans of cider could be had for £3 and this seemed to appease most of the younger audience members.

If you like Flogging Molly, Gogol Bordello or the Dropkick Murphys then you will almost definitely enjoy Bare Knuckle Parade. They have energy, charisma and they seem to get better every time I see them. I highly recommend you check out their tour, and let yourself be persuaded to buy their EP too.

All words by Nyika Suttie. You can read more from Nyika on Louder Than War here, she’s @puzzledbyadream on twitter and her blog is Outsider Looking Out.