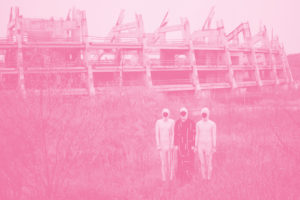 Louder than War’s Ioan Humphreys gets absolutely blown away by the ferocity, ingenuity and often excruciating noise summoned up by Liverpool’s Barberos.

One of the many pleasures of writing reviews in my spare time and getting sent links to singles, EPs and Albums by PR people and labels that are convinced they are on to the ‘Next Big Thing’ (remember them? FMB wasn’t it?…) is that occasionally you will get something sent to you that 1. you can’t stop listening to. 2. You have heard nothing quite like it EVER. And 3. You immediately jot it down as one of your albums of the year. This is exactly what happened when i was sent the latest album from Barberos to listen to last week.

At six tracks you could be easily mistaken in thinking this was a mini album. And i guess in some respects it is. But with the opening opus of a track ‘The Return of The Ladius & The Ladius’ clocking in at just over 15 minutes, you do certainly get your money’s worth here.  And what an opener it is. Beginning with sinister, 80s tinged electronica reminiscent of the wonderful  John Carpenter, it slowly begins to layer the keyboard sounds on top of the repetitive drum beats. These beats and the increased use of the cymbals and some very impressive prog style keyboard noodling layer on top of the pounding electronica to come to a beautiful crescendo halfway through the track.

Once this has slowed down, the time signatures completely change and a main throbbing backline takes this epic track into completely new sphere within Barberos’ mentalness. Ramping up and up and up to its natural chaotic finale, this opener comes to an exhausting halt and it really does feel quite astonishing.

Follow up ‘Timor’ starts with bombastic double drum action with free jazz keyboards over the top. This soon descends into a corrosive cacophony that builds up to a crescendo halfway through. The time signatures once again change and you are subsequently engulfed in more weird intense noise.

It is only when the third track ‘Hoyl’ starts that you begin to see the scope of this band. Using Throbbing Gristle ‘Beachy Head’ esque sound scapes/field recordings? and the spoken word of legendary This Heat member Charles Hayward, Barberos really do show the extremes of clever creativity that they are capable of. It’s sublime and evocative.

And as the album progresses this experimentation and creativity is again shown in their use and incorporation of the Wurlitzer organ, boss nova rhythms and even Gregorian chanting. All of this is used against backdrops of industrial strength beats, excruciating noise and inventive (and deliciously) mind bending time signatures.

Now, i know i do a great public service writing here for Louder than War (what?), but I cannot gush any more for this band than what i have. Barberos have the unique ability to blend the chaotic blasts of noise of The Locust; the repetitive, yet intense dirge of Fuck Buttons and the crazy time signatures of Rolo Tomassi or The Dillinger Escape Plan. Oh and throw in some frantic prog keyboard wizardry and you have Barberos. Absolutely brilliant and absolutely essential. They play Liverpool Music Week on 5th November. Catch them there or anywhere. Just see this band now!