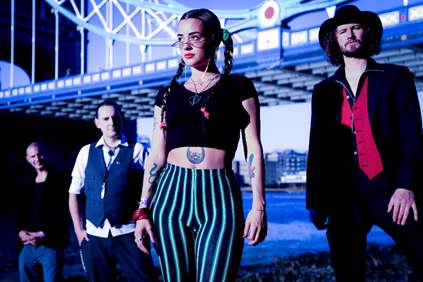 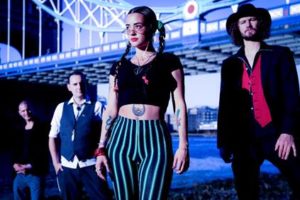 Louder Than War premier the forthcoming single from garage-rock collective Barbarella’s Bang Bang, the aggressively addictive psychobilly stomp of ‘Cowboy Job’, which will be released by their own label on August 31st.

Best known for their raucous live sets, the band fronted by the enigmatic Barbara Pugliese have become a staple of various festivals and club nights over the course of their career. With members originating from Italy, Latvia and London, it’s no surprise Barbarella’s Bang Bang have such a diverse and multicultural group of influences from South and East European Folk to classical punk rock. These bohemians play surf like Dick Dale founded The Meteors, but this time they’re fronted by The Slits’ Ari Up.

The ironically titled ‘Cowboy Job’ is an ode to a past relationship, but not in a way you might imagine. Like all things in the Barbarella world, it’s been twisted and contorted into something new; taking a story of heartbreak and reforming it into one of empowerment. Here the antagonist is portrayed as a spellbinding entertainer, a charmer with lustful, obsession-inducing powers – a spell broken by a clearer understanding of reality and belief in one’s self.

“This is the first time that I’ve written about something that gave me a lot of grief, with groove”, Barbara tells us, “And in regards to the satire within the lyrics, I must say, it’s been a very efficient healing method. With humour, the weight of something heavy gets lighter and we can get over things a bit easier. I’m actually grateful for having encountered this in my life, I was inspired a lot artistically. Let’s say that there’s sometimes a pearl to be found in the trash!”

There’s often a difficulty putting something so personal into words, let alone into a track alongside other musicians, but Barbarella’s Bang Bang are more than a band, they’re a group of unprecedentedly like-minded individuals who found each other from distant corners of the globe. With the help of bassist Oliver Joss Lee who also produced, each member understood and respected the subject matter, resulting in the recording of something truly special.