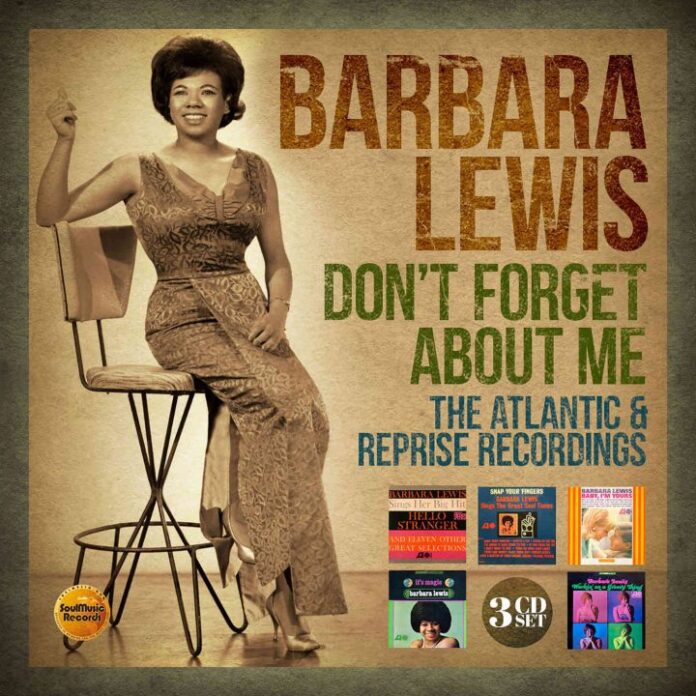 Barbara Lewis – Don’t Forget About Me 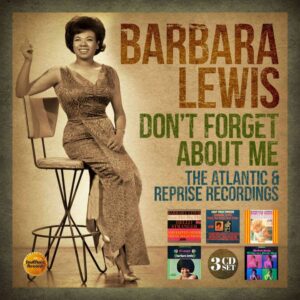 Barbara Lewis was born in 1943 in the small village environment of Salem Township, not that far from Ann Arbor in Michigan. She came from a musical family and followed in their footsteps by developing her talents on guitar and organ, plus writing and performing her own compositions. However, she never initially envisaged a career in music, as after graduating from high school her heart was set on training as a police officer. Her slight stature put paid to that ambition, with Barbara then deciding to dedicate herself to training for a position in nursing. Fate played a part at this moment, because a tape of her songs found its way to local DJ Ollie McLaughlin, via an introduction from her dad. McLaughlin liked her voice and songs and quickly signed her up to his small label Karen, an imprint he hoped would eventually build up to rival local big boys Motown. It never happened, but Barbara’s career was set in motion.

She travelled to the famous Chess studios in Chicago to cut her debut single, My Heart Went Do Dat Da/The Longest Night Of The Year. Released in 1962, the record did not make a splash in the charts, but it did alert the larger Atlantic label to Barbara’s potential. They gave the record a national release and required a follow up too. The big breakthrough was to come with her third single, the self-penned Hello Stranger, issued in May 1963. It hit the top of the r&b charts and number three on Billboard in the US.

After this success, the link up to Atlantic was made solid and Lewis continued to score R&B hits, and some sizeable US chart hits, through most of the 1960s, as well as releasing five albums along the way. Her sultry, cool singing style influenced many performers as time went on, showing that one could sing calmly but also still communicate with true passion and soul. The later recordings on this collection find her prototyping a creamy and euphoric sound that could be seen as helping to pave the way for Philly in the mid-70s.

In 1965 Barbara scored a pair of top ten singles in the form of Van McCoy’s Baby I’m Yours and Make Me Your Baby, written by Helen Miller and Roger Atkins. Her last big success came with the Chip Taylor/Billy Vera song Make Me Belong To You in the summer of 1966. She moved to the Stax label in 1970 and released a well-received LP in The Many Grooves Of Barbara Lewis and in 1972 she signed for Reprise. Unfortunately, she only cut the one single for them, Rock And Roll Lullaby/I’m So Thankful (the last two tracks featured on this set), before bowing out from music for a long period of time.

This new Don’t Forget About Me collection commences with the kind of R&B pop with which Barbara made her name. The big hit Hello Stranger has a lovely flowing Hammond line, showing her natural enthusiasm for the instrument and also benefiting from some fine backing vocals from the Dells. The contrast between Lewis’ sweet voice and the Dells’ harmonies is magical, making one wish they collaborated more. The Doo Wop flavoured Does Anyone Want A Lover? is excellent and the light and sunny On Bended Knee simply delightful.

I Say Love proves that she was as equally at home with uptempo numbers as ballads and the big brass blast of Baby, Workout benefits from a lithe bass line. Though tucked away on her Snap Your Fingers album, which is included in its entirety at the end of this first disc, Turn On Your Love Light is fast and fiery, and the blues-powered Just A Matter Of Time bewitching and touching. After a stomp through Twist And Shout, the final track on this disc is Shame, Shame Shame, a much-covered Jimmy Reed blues number that Barbara gives a bracing workout to, with some neat twanging guitar into the bargain.

Moving onto disc two, this one begins with a recording session set down in Chicago from 1964. Though it didn’t really make waves as a single, some lovely organ swirls enliven How Can I Say Goodbye and Someday We’re Gonna Love Again is a handclapping happy dance treat, propelled by some jolly horn work. The Jackie DeShannon/Jimmy Page number Stop That Girl looks at relationship problems in a way that may have had a little bearing in the Vic Godard number of the same name. Make Me Your Baby, her final chart biggie, is brassy and fine, and when she says “I’m gonna kiss you is a special way” you better believe it!

The It’s Magic album was aimed at pushing Barbara more towards a jazz and nightclub blues style, looking to broaden her appeal. However the single Don’t Forget About Me, a Goffin and King number that was minor hit, had little touches of beat music in its guitar jangle. It’s a nice version which didn’t make the impact it deserved to. A cover of Sorrow (also covered later by David Bowie) is a real heartbreaker and she proved elsewhere on the LP how adept and comfortable she was in the jazz format, like on the appealing exotica of The Shadow Of Your Smile and the lush title track.

The final disc of the set finds Barbara repositioning her soul/r&b leanings in a lighter, but cool and breezy manner. It’s crammed full of beautiful dance numbers perfectly sung and the best disc of the set in my view. Opening offering, Girls Need Loving, sets out her stall from the get-go, with high production values anchored by her attractive and assertive voice. I’ll Make Him Love Me is wonderfully smooth and danceable with the lively Fool Fool Fool (Look In The Mirror) also very satisfying. On Sho-Nuff (It’s Gotta Be Your Love) there’s a little gospel in the vocal arrangement, but it all works very well. The final single issued on Reprise does display a bit of a change of emphasis, there’s a marked country blues feel on both Rock And Roll Lullaby and I’m So Thankful.

After the Reprise single, Barbara took the decision to step away from music for many years. She had been fully occupied by live work, recording and the necessary media promotion that entailed since the early 1960s and now had a strong urge to live the normal life that had been denied her during that time. Though she still regularly received royalties from her back catalogue, she needed to make ends meet and to this end pursued a wide variety of occupations. While her old records were being discovered by a new generation on the thriving Northern Soul scene, she was none the wiser, working as a security guard or at a shop till. She did begin to perform again in the 1990s though and continued to give well-received stage shows up until 2017, when she finally retired.

This is a lovely set from one of the breakout stars of early 1960s soul music. The only thing a little disappointing is, as things went on, Barbara wrote less of her own material. A shame as she clearly had a different voice, for instance the big hit Hello Stranger was greeted as a love song when it wasn’t – she had got the idea from a local greeting from her childhood. But that aside, this set is full of great material, fine performances, dance grooves, and heart-stopping emotion. I hope Barbara Lewis is enjoying a happy retirement. She certainly earned it as an R&B trailblazer of rare talent.