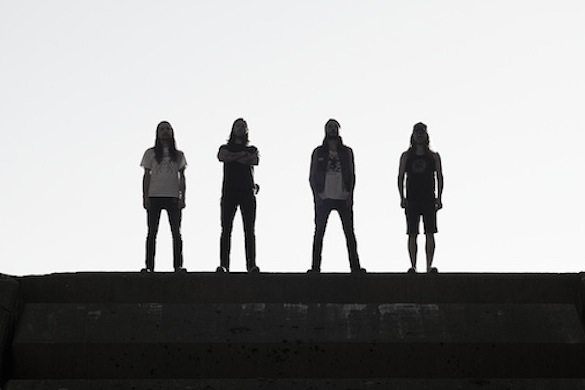 Vancouver punk stroke hardcore stroke metal band Baptists release their second album next month, on October the 13th to be precise, via the magnificent Southern Lord label. Titled Bloodmines it’s a ferocious, raging beast of a release, tearing along at a fair ol’ clip leaving, as the best of albums of this ilk always do, the listener breathless by the time they reach the end of the last track. It is, in short, a quite brilliant listen, so needless to say we’re super stoked to be able to host the UK premiere of the penultimate track on the album, Calling, for you all today.

Baptists probably came to most of our attentions with the release of their debut album, Bushcraft LP, in February 2013, also via Southern Lord. The album immediately marked the band out as serious contenders thanks to a potent mixture of intense vocals, riffs to die for and powerful but clever drumming which batters as much as much as it impresses. They followed that release up with a heavy touring schedule which reinforced what the album suggested – that the band are flying towards the top of the genre(s) they regular get tagged in with. There are still a few people out there who don’t know about the band though, but we’re thinking that’ll probably be about to change soon as this new album’s released, an album that’s sure to be in many end of year “best albums of 2014” lists.

Although as it says above the album rips along at a fair ol clip it does reign in the fury of the riffs bonanza a tad in places, letting us come up for breath and prepare ourselves for the next, inevitable, assault. It also means one can focus a bit more on the exceptional instrument playing, such as the intelligent and skilful drumming of Nick Yacyshyn (who can number Dave Grohl amongst his fans) and the more intricate guitar playing that proves Baptists are far than a “balls to the floor and riffs to the fore” band. The track Calling we’re premiering today may be one of the least fuming, enraged tracks on the album but that doesn’t mean there’s a dip in intensity – far from it in fact, the tension is palpable in fact. The track also has the job of setting shit up ready for the album’s denouement, it’s final track For Profit which is one hell of a bruising end to a fantastic album full of discordance and power.

Quoting from the press release:

“Not ones to rest on their laurels, Baptists have found new ways to express their rage and with Bloodmines they have created a memorable and commanding album.”

Amen to all that.

Linkage for bands and label, plus the track list can be found below the stream of Calling… (pls visit the site via a pc if viewing on a mobile device and the widget isn’t showing – or google the track on Soundcloud after our 24 hour exclusivity has expired.)

Check the band and their label out online at these places: