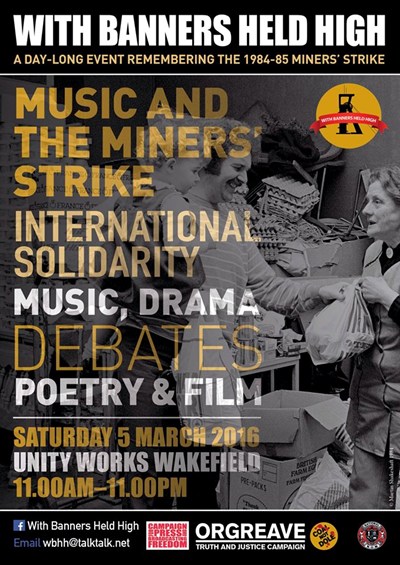 With Banners Held High a great event that focuses on music and solidarity during the Miner’s Strike.

With Banners Held High 2016 takes place at the Unity Works Wakefield on Saturday March 5th and will feature film, debates, poetry and live performances in the evening from The Farm, The Hurriers and Joe Solo with Attila The Stockbroker acting as compere.

One aspect that the day will commemorate is the International Solidarity during the Miner’s Strike that saw donations and food flooding in as support for the strikers spread round the world. There will be speakers from France and Denmark as well as Tony Garnet (Producer of Cathy Come Home and Kes) and Tosh McDonald (ASLEF President).

There is also a focus on the links between music, politics and protest and the role it played in fostering support for the strike.  Test Dept produced Shoulder to Shoulder with the South Wales Striking Miners’ Choir during the 1984-85 miners’ strike and organised the Fuel to Fight tour.

Two members of Test Dept – Graham Cunnington and Paul Jamrozy – will take part in a discussion on Music and the Miners’ Strike and introduce the two films Fuel to Fight (1984) and the stunning DS30, made for the 30th anniversary of the miners’ strike.