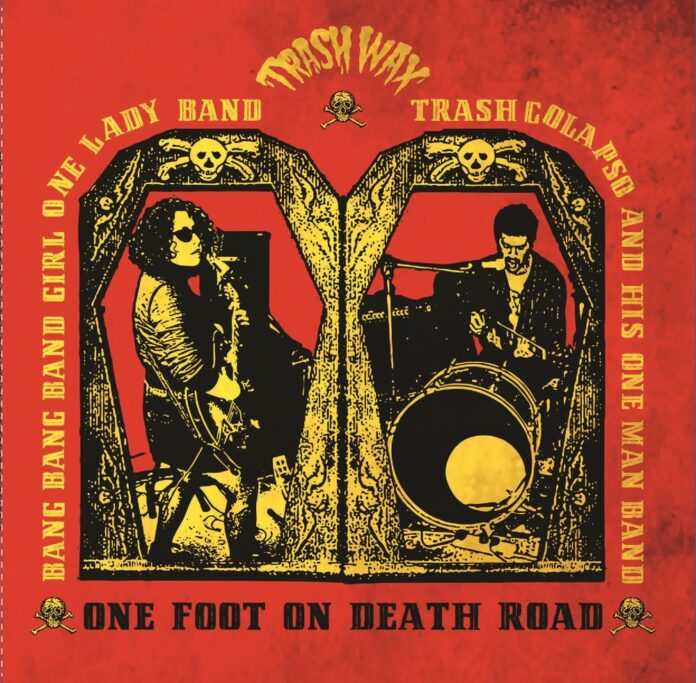 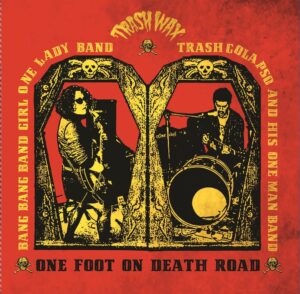 Another release via the impeccable Trash Wax label; this one brings together a couple of South American trash heads; each artist getting one side of the deliciously titled ‘One Foot On Death Road’ which is pressed on limited edition yellow vinyl.

Bang Bang Band Girl is a one-woman musical project courtesy Sheri Corleone. Sheri hails from Valparaíso, Chile, and maybe familiar to one or two from her ‘It’s Monsters Meeting Time’ radio show and releases with Mystery Machine, or even her vocal contributions to the Varsovia album ‘Recursos Inhuamos’. Onstage, she uses a bass drum, a vintage Japanese Teisco guitar, and just her voice whilst Trash Colapso & His One Man Band hail from neighbouring Argentina; Buenos Aries to be precise – Trash has been banging out distorted garage gems since at least 2012 at which time he was going under the moniker Trash Colapso & His Scrap Metal Truck!

Ladies first is the mannered tradition, as such Bang Bang Girl Band open up proceedings with ‘Schizo Paranoid’ a suitably head pummelling blast built around a seriously tortured guitar riff, think Bryan Gregory level fuzz couple that with a stripped metronome beat and some salacious vocal rasps, before taking us on a mind melting trip to the sleazy side of trash n’ roll. ‘Horns’ is pure filth, should a certain Mr Tarantino ever choose to make porno movies, then this breathy bump and grind is the lead track, oh, and I forgot to mention all the accompanying spooky space noises. ‘A New Cave’ opens with some neat guitar picking that Poison Ivy would have ground out on that infamous 58’ Gretsch before taking us on a sub-aqua psych joyride ahead of the glorious tambourine guide and grinding guitar noise of ‘Apache’ complete with B-movie overdubs and squealing hot rod rubber.

‘Shadows & Dust’ allows you to draw breath, perhaps your last – this sounds like Ms Corleone is about to do something very painful to the object of her desire, you can almost smell the sweat, the leather dotted amongst the distant yelps and those damn sci-fi shlock noises – think Mazzy Star on mescaline and your nearly there.

Closing with ‘Sweet Talk’ a slap-back rockabilly romp that immediately had me thinking of Sparkle Moore; then I read the sleeve notes, and found that its a cover of a Bunny Paul B-side that came out on the Point label back in 1956 – this is one hellfire way to close the first side.

If you go by the name Trash Colapso then taking up the challenge of following Ms Corleone isn’t a problem; well it sure as hell doesn’t seem to be!

‘Beat The Devils’ comes across as Hasil Adkins turning his efforts to a Meteors classic, complete with semi-hiccupped garbage vocals, the perfect entrée for the primitive distorted grind of ‘Snake Woman’, this one dragging you down into some fetid bar dive to be treated to the Gun Club via the Devils knows where ‘White Trash’ cocaine come down, as a pick me up ‘Smoke Blvd’ attempts to cover numerous Legendary Stardust Cowboy tracks at one, vocals barely audible above a cacophony of noise – similarly during the genuinely menacing ‘Black Charm Boogie’ the sub-sonic vocals act as a rhythm peppered with the occasional ‘oh, yeah’ and the sweet click of spurs!

A stunning album, should you have any passing affection for The Cramps, The Gun Club, or own a Born Bad album then this one is worth hunting down.