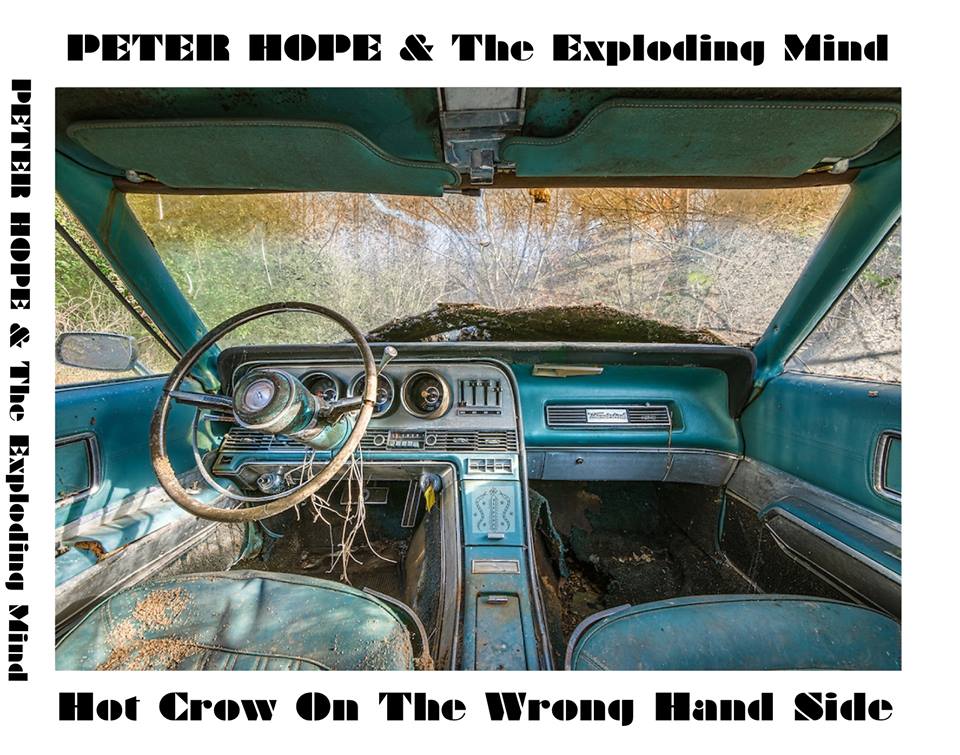 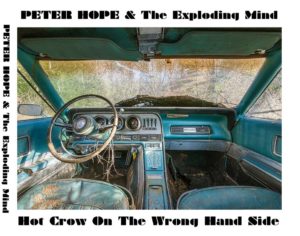 The extraordinary Pete Hope and his ever evolving creative nature has propelled him progressively through an explorative year of music. This has been created both on a solo and collective level an untameable experimental flare of expression which has been channelled through inspirational tones that are lyrically blues-based and impel on an instrumental level towards electronic, avant-garde punk, merged with strong currents of post industrial rock that is sure to peel the paint straight off your chassis.

2015 saw four superb releases, three being on Pete’s record label “Wrong Revolution”. The first being in March along with his dedicated collective“Pete Hope’s Exploding Mind” with the release of the gritty album “Hot Crow On The Wrong Hand Side” This album impacted on me like a witch doctor who had conjured up an emancipating cure for a hex that had so menacingly consumed my spirit for longer than I can remember.

The second was Pete’s solo EP “New European Sedan” released in July, material that draws deep atmosphere with hypnotic poetry & a stimulating use of electronics. Then a month later in August the release of Pete’s“Live 1986 Paradiso/Hacienda” which consisted of two exceptional live recordings that take a step back to his 1986 “Hoodoo Talk” tour in Holland. On absorption these recorded imprints brings to light just how boundless Pete’s expression is, highlighting the eccentric edge in which he continues to own today.

His fourth, most recent release has been in December on experimentalist band, Sun Araw’s record label “Sun Ark” Pete named these works PEDRO MUTHASHIP-TEN REVOLUTIONS OF WRONG Which have been released on C40 cassette tape; Sun Ark’s cassette releases always come out in batches, so be sure to put in your order as it stands. Pete expressed on social media that Ten Revolutions Of Wrong was his first fully solo recording making it all the more special & not since putting out “Leather Hands” with Richard H. Kirk has he been so excited.

Upon my emancipation from delving head first into the album“Hot Crow On The Wrong Hand Side” I felt compelled to share the Voodoo far and wide through the magical medium of social media. However Facebook’s draconian measures blocked my posts on music groups for a period of two weeks, limiting my sharing of musical interests.

Even though I work for a music promotions organization which entails promoting music as my line of work they still blocked my activity, which struck a chord hard in me just how unfair & intrusive Facebook can be towards people who have good intention and who are just trying to get along in life. When Pete heard about what had happened he reacted by making the most kindest of gestures, insisting on posting me, all the way from New Zealand! He sent a varied selection of five superlative albums including “Hot Crow On The Wrong Hand Side” which buzzed me right up!. The body of works he sent where made up of artists albums he has laid vocals upon & has penned lyrics for.

Albums such as Pedro Trash “No Wave Blues”, Alicia Is White Trash “So Fuck It” White Trash x3 “White Trash” along with Natascha Schampus “Cafe Industrie- A Lucid Dream”. The first three albums can be found on his “Wrong Revolution” record label with the exception of Natascha Schampus “Cafe Industrie- A Lucid Dream” which was released on “HauRucK” records; yet another interesting label to find pleasure in checking out & delving into. This amazing package landed on my doorstep for Christmas eve and on opening my eyes lit as my imagination ignited with all the captivating artwork that lay before me. I felt moved by how a negative was so unexpectedly turned into a undeniable positive; the very least I could do was to pen words in honour of his enthralling creative output.

Hot Crow On The Wrong Hand Side: https://peter-hopes-explodingmind.bandcamp.com/album/hot-crow-on-the-wrong-hand-side

From these albums it was most certainly “Hot Crow” that wove its fine intricate tapestry around my mind & spirit.
Track 1 “Red C” hit me like a tidal wave with its raw, gritty electronic edge & entrancing momentum. It feels so lyrically spontaneous in such an exciting way. Pete’s compact punk/blues poetry, just oozes all the character and point driven attitude I could every wish for. The song speaks of the gritter side of living; asking is that really your ultimate aim? I feel with such strong, intense electronics supported by lyrical genius it’s impossible not to feel entranced by its very nature. Track two “Hot Crow” owns the essence of tribalism with a fascinating old blues style sample that is wrapped around powerful Moog electronics. This is just spell binding. Pete’s vocals allure like he has channelled the spirit of a Navajo Indian through his waking consciousness, with words like. “Stand wisely Hot Crow” & “The Lamb Ain’t Dying” I just can’t help but feel that Pete, along with his collective of musicians are undeniably the coolest tribe, this side of the Einstein-Rosen bridge.

Track Three “Oh Death” hits automatically with heavy kick drum beat’s moulded around a burly, uncompromising baseline, where Pete’s vocal tone lowers to join in unison. This track not only holds a girt, but drives home an uplifting element that just makes you want to stomp and rejoice. The electronics own an awaking with their piercing bell like repetition. As you can imagine by the song title, the subject matter sings about facing death; I know I could certainly face the grim reaper if he entered my quarters banging this tune out, again this owns an earthy spiritual tribalism that stirs and awakens the senses. Track Four “She Talks Wild” captivates me with its incredibly industrial attitude & sassy character. The electronics chug and pull in a severe way, projecting a mechanical momentum that alarms & intrigues. The lyrics are edgy and spontaneous however also humours, with hints of sarcasm & wit. I Love it! ..Track five “Deface” Again hits hard with a thunderous hard baseline with a strong lyrical vocal that holds plenty of sarcasm & wit. This track speaks of the many masks that people hide behind with words such as “You can’t face yourself, you erase yourself” I adore the raw undeniable attitude of this hard industrial/punkier edged track.

Track 6 “Up From The Roof” Takes a more spaced approach with strategically placed electronics that makes you feel like your inside the actual circuitry. This is certainly one of the most intimate tracks on the album, with Pete’s lyrics laid out in a tight-nit way through the interesting electronic projection. Most certainly the track is very intense & claustrophobic in places, however it sure moved me in the most surprising of ways. Track 7 “Super Love Pharmacy” rattles into an intense cascade of electronic beats which fall fast like a shower of red hot fireworks. Another immensely attitude ridden piece with wildly active Moog & quirky sharp lyrics that are humours & witty to fall into. This track almost comes across in a mantra style way with the repetition of the lyrics “No Pharmacy is complete, No pharmacy can compete” and “ Quick as a whip” I find the whole deal fascinating & I really admire Pete Hope’s enthralling writing style.

Track 8 “Negative” is hard hitting, with no relenting in the mechanical industrial style vibrations. I love the contrast of the cold hard machines against the life and spirit of such a vibrant and exuberant man creature. This track Is loud and boisterous and demands the attention that he can’t live in a negative way. Well, neither can I, if the truth be known, anyway how I could I with music like this?!. Final track on the incredible journey that is “Hot Crow” displays an irritable expression towards radio play, commercialism, publishing deals & all that world entails. With lyrics such as “ Maybe she’ll hit on the radio, & “Just say that you sold it” sustaining an almost demented repetitive whirling & scratching from the electronics that creates an unhinged raw intensity that resonates on a monumental level. It’s sure one powerful way to bow out of the album. I absolutely love the over all expression of this album. It stand’s as being wild although in contrast well channelled, drawing upon the expression of defiance & being a nonconformist myself I salute wholly everything this album represents.

A work of art that really owns the ability to liberate on so many intriguing levels ..& heal in so many surprising ways!.