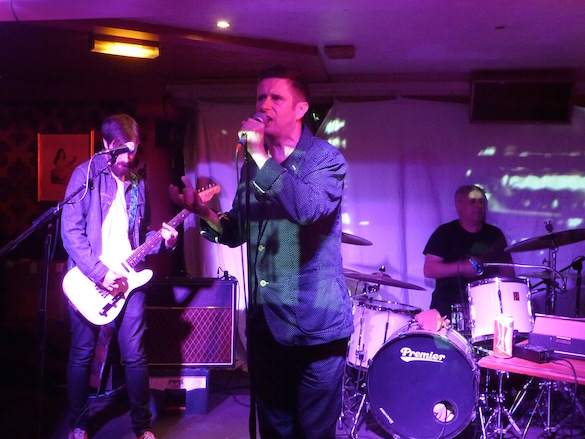 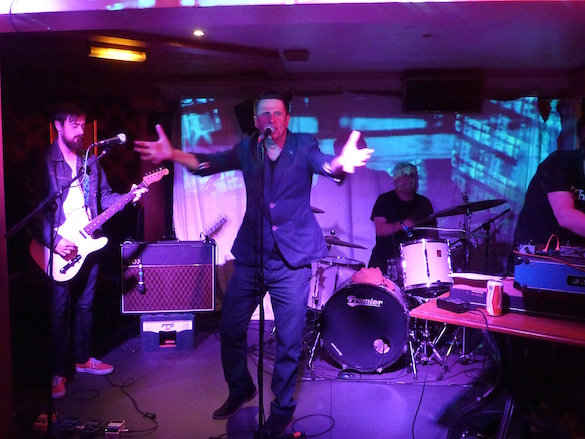 The last time the Band Of Holy Joy played Manchester, it was at the legendary – now long gone and much missed – Boardwalk way back in March 1990 during the heady days of the whole Madchester / Baggy scene. At that time, comparatively speaking, their profile was much higher, thanks to a couple of incredible albums and singles on Rough Trade records and two much-fêted support slots with [the then fast-rising] James – the second of which, at Blackpool Empress Ballroom later that summer, still stands as one of the most incredible concerts I have ever experienced, as both bands were on simply irresistible, unimpeachable, form. 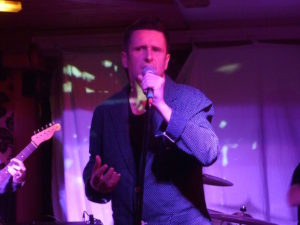 Fast forward to the present then, and, after this seemingly never ending 24 year wait for their return, we find ourselves all a lot older, wiser, maybe greyer around the temples. Funnily enough, as a timely reminder of the yawning gap between that last gig and this, two members of erstwhile baggy/acid/dance/rock reprobates the Paris Angels, Rikki [Turner] and [Steven] Taji, were present amongst the small devoted gathering, proffering the usual loud support and encouragement.

What is immediately clear from the first number aired tonight (one of their very finest pop songs Real Beauty Passed Through) is how surprisingly little the ever affable singer Johny Brown has changed at all. Time has not quelled his passion, fire and sheer commitment to his art: always creative, often enigmatic, but forever engaging. True, over the 30 years of Holy Joy’s singular and maverick existence (only properly disbanding between 1993 and 2002), they have had arguably as many line up changes and floating members/collaborators passing through their ranks as The Fall, and nowadays, having long dropped off the radar to all but their most devoted fans who forever revere and cherish them, they’re perfectly happy to continue putting out intriguing records and playing shows completely on their own terms, as and when they please. Of course, things would be different if they still enjoyed more [financial] support, promotion and accolades even now, but all these niggles matter very little as all eyes fixate on Johny as he commands our attention with a performance that simply leaves us entranced and breathless with anticipation.

Newer numbers such as the rousing and almost anthemic Open The Door To Your Heart, The Fall [NOT about Mark E, I hasten to add!], A Place Called Home, the almost  but not quite eponymous Land Of Holy Joy, and A Train Ride To Another Place are interspersed with a timely sprinkling of old favourites: the frenzied crowd pleaser of yore Mad Dot; the magnificent, almost transcendental Tactless and the ecstatically triumphant Capture My Soul (from their 2002 ‘comeback’ album “Love Never Fails”). Throughout the set, collaborator Inga Tillere’s innovative and sometimes surreal visuals are projected onto the space behind the band, constantly competing for our attention along with Johny’s riveting stage presence. 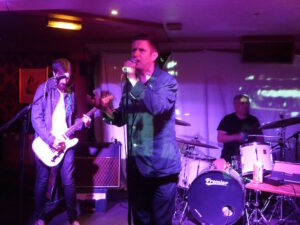 The band are extremely tight [“It’s our Garage-Punk Band line-up!!” – proclaimed Johny proudly before the start of the show] : just bass, guitar, keyboards and drums (long time sticksman William Lewington having returned to the fold), and in the absence of the familiar strings which graced so many seminal Holy Joy moments (former principal member Chris Brierley having moved on due to family commitments), we now have new and inventive re-arrangements, courtesy of current member and creative lynchpin James Stephen Finn, to songs such as Rosemary Smith which begins at snail’s pace amid much maudlin reflection and eventually climaxing at a furiously high tempo; and the sheer unbridled cathartic exorcism of Fishwives which similarly benefits from a downbeat first half before suddenly crashing into top gear and has a few of us positively slam dancing by the end of it!

Then all too quickly it’s over, save for the encore of another majestic pop moment: the rarely aired and almost forgotten Claudia Dreams – its shameless pop-soul stomp eliciting euphoria amongst us, and, to finally sign off with, a return to the experimental drama with an unlisted – almost funky – rendition of Empty Purse Found In Hotel Lobby.

One thing you can safely say about the Band Of Holy Joy is that they are never predictable; even after all this time, they still know how to put on a show. To call this just another gig would be to do the whole band a complete disservice. Long may they continue to enchant and entrance us all!

All words by Martin Gray. This is Martin’s first piece for Louder Than War.