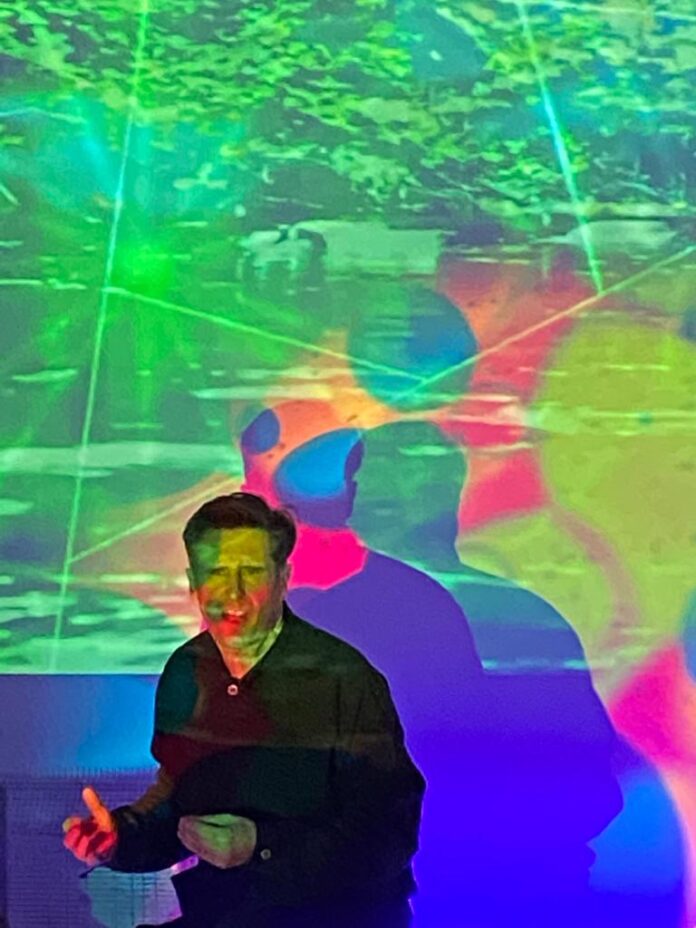 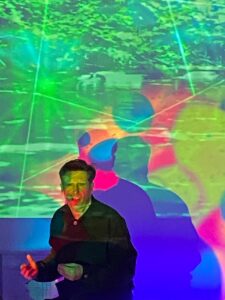 Band Of Holy Joy stage an event with a sense of occasion that emerges out of the pandemic cultural desert almost as a mirage, drenching virtual mediums in creative colour. Bryony Hegarty reviews for Louder Than War.

Notes From A Gallery was a four day online collaboration between Band Of Holy Joy and Whitechapel’s Gallery 46. Described as ‘a Londonewcastle project space’ the venue is run in association with Martin J Tickner, Sean McLusky, Martin Bell and Wai Hung Young. An inconspicuous Georgian town house exterior conceals white space within, which appears to have Tardis-like qualities once occupied by Band Of Holy Joy happenings.

Forthcoming release, Dreams Take Flight is the inspiration for eight films, each commissioned for a song on the album. Two films are screened every night during the live streams. Other content includes poetry, soundscapes, debate and light installations from Inga Tillere and Bjorn Hatleskog. Masks feature throughout in a variety of applications from pandemic to ancient cultural tradition. In addition, intriguing props appear such as an empty bird cage and a mechanical music box creating eerie tones. There are also daily radio broadcasts. The event administers a much needed injection of culture. Furthermore, far from a remote experience, the concept takes into account our virtual eye view as part of the process. Eclectic, visceral, immersive, the sequences between screenings provoke, engage and entertain. Johny Brown ever the visionary compatriot of experience and talented bard.

Day 1: Crowds And Protests
Embarking on the reverie we follow Brown walking through London’s East End to Gallery 46. In a somewhat furtive process he creates a trail of event stickers on street furniture. This emblematic DIY tradition is long associated with Band Of Holy Joy. A soundtrack incorporates strains of the song also titled ‘Notes From A Gallery’, as well as sampled voice recordings and sirens. The first film ‘This Is The Festival Scene’ by Alexandra Lort Phillips, combines kaleidoscopic swirls, acid colours, revellers, social media icons, band to camera sequences and extinction rebellion protests. Significantly, we also confront an ever rising accumulation of rubbish. To a tune of underlying reggae inspired beats, lyrics remind us ‘we are born selfish, die stupid, with moments of clarity along the way’. Both song and visuals contemplate our benign yet reckless enjoyment of the planet. 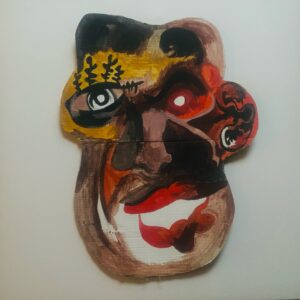 Day 2: Walls and Masks
In flickering shadow, Johny Brown welcomes us back. Sukie Smith (Madam), performs mesmerising satirical deliberations on the art world and later an affecting response as the female character from ‘That Magic Thing’. Gil De Ray’s film ‘When Love Is Not Enough’, creates hazy and warm-hued vibes with the vintage feel of flickering Super 8. Featuring messages of hope from Berlin, Ray uses the wall as a metaphor for emotional barriers in uncertain times. Tam Dean Burn’s interpretation of ‘On Set Romance’ is a war, sex, death triptych. He incorporates military footage and Japanese Noh, Nepali and Commedia dell’arte masks, which prove hauntingly more expressive than the human face. 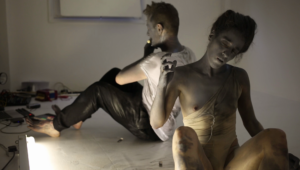 Bjorn Hatleskog’s film ‘Notes From A Gallery’, takes us back to paintings, music and performance art sequences from 46 exhibition Liminality. Thus giving insight into the back story for Dreams Take Flight.

Jo Joelson uses a rear view car mirror perspective in ‘A Clear New Vision’. From the fluorescent light of a Brutalist multi story car park, the effect is akin to a reverse helter-skelter. Journeying up to the roof she captures the contrasting airy light and space of a sea view sunrise.

Day 4: Love and Light
We take a gallery tour: Polaroid images, the mask room, a McLusky painting in progress. Jonny Mugwump’s film for ‘Take A Leap Into The Great Unknown’ brings sea, space and celebrity interspersed with psychedelia. Using collage, loops and escapist surrealism, Inga Tillere’s ‘That Magic Thing’ visualises a glorious full band sound: guitar, synth, bass, vocals, glockenspiel and trumpet. Sequences of nature, dream, and ritual induce a wandering of the mind, freed from the confines of reality. 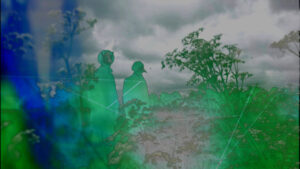 The intervening and concluding live sections feature Johny Brown, James Stephen Finn and Peter Smith, bathed in mouthwatering iridescent visuals, attired in traditional Latvian masks. They place objects on the gallery floor in a ceremony that is both pagan and ethereal. The finale, a Dreams Take Flight sequence of word, light and sound, strays into the late night world of the subconscious.

The three dimensional power of the show is not lost in translation. Notes From A Gallery is a diverting world away from the absurdity of our current reality.

Band of Holy Joy’s album Dreams Take Flight will be released in May of this year.

Featured photo by Kirsty Allison
All other photos by Inga Tillere