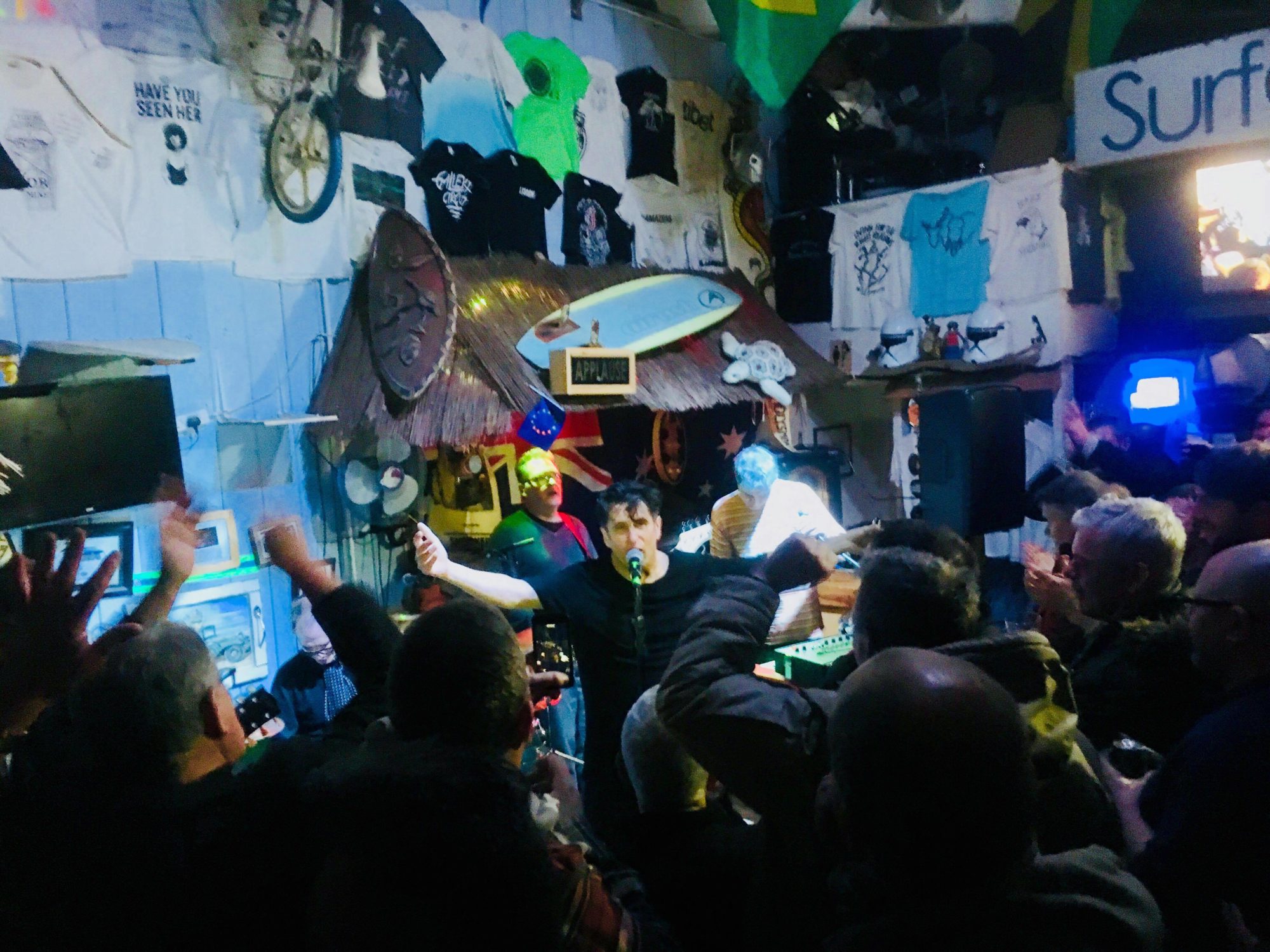 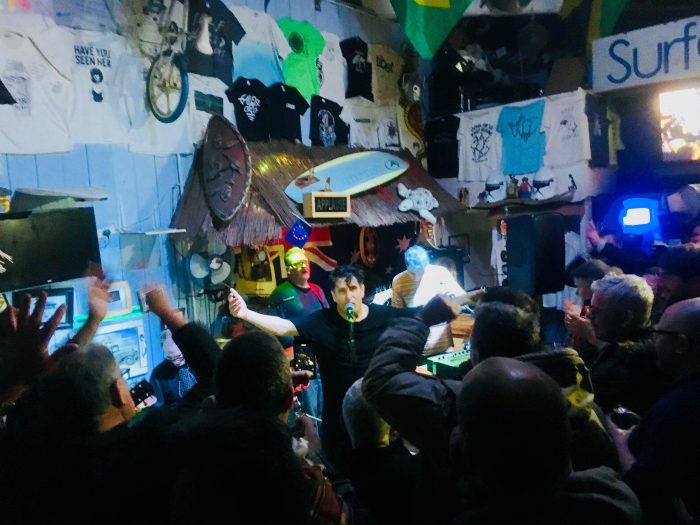 The Band of Holy Joy with Hector Gannet

Indie veterans conclude their ‘Funambulist We Love You’ tour with a triumphant and emotional homecoming for singer Johny Brown.  Newcomers Hector Gannet impress with a powerful set.

Perched on the edge of Tynemouth’s famed surfing beach The Long Sands, the Surfcafe is a small but very popular café/bar during the daytime.  The venue miraculously transforms into a very intimate concert venue in the evening, with all the tables cleared to create a space just big enough for band and audience to squeeze in, cheek by jowl.

Following a rousing post-punk DJ set by Subteranneans, North Shields group Hector Gannet took to the stage- actually a space on one side of the cafe, on the same level as the audience.   Singer Aaron Duff and drummer Jack Coe formed the group after the break-up of their former band The Middens, with the addition of bassist Martin Wann and other floating members.

Remarkably, the Surfcafe turned out to have excellent acoustics, with the band’s sound clear and perfectly balanced.  Duff immediately impressed with fine vocals and crisp, nuanced guitar-playing, making very effective use of old-school dynamics.  Jack Coe’s drumming demonstrated a similar subtlety while Martin Wann’s bass-playing was perfectly-judged throughout.

Hector Gannet’s songs are inspired by the heritage of the North-East coast, with references to the fishing and shipping industries, local landmarks and the lives of ordinary people of the area.  Their performances are usually accompanied by rare archive footage of the North East, as part of the Moving North: Coastal project, which itself is part of the BFI’s ‘Britain On Film – Our Lives, Our Stories’ project. 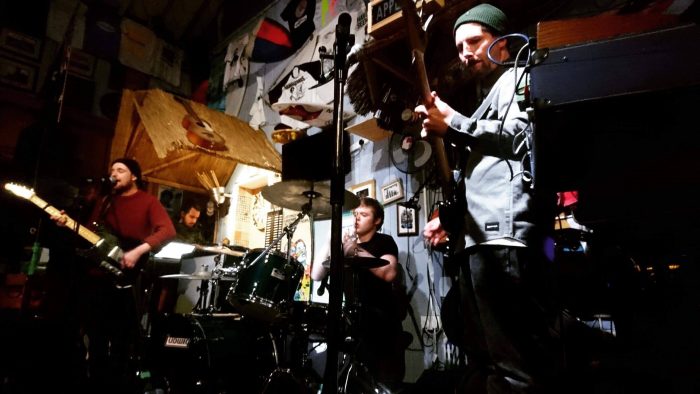 With no visuals at this show, the songs had to stand on their own merits, which they did to great effect, no mean feat for a new band performing experimental soundtrack songs.  Check out their website for more information.

Band of Holy Joy quickly took to the stage after Hector Gannet, frontman Johny Brown a ball of energy despite struggling with a cold that had resulted in him losing his voice after the previous night’s show in Newcastle.  As the band launched into the opening track, ‘A Revivalist Impulse’, from their excellent current album ‘Funambulist We Love You’, Brown’s vocal problems were clear, but the singer soldiered on with the aid of a hearty glass of red wine, his voice quickly becoming stronger as it warmed up.

This was a homecoming gig for North Shields-born Brown, who drew a vociferous response from the audience with his call for  “the resurrection of hope and possibility…the courage of our scum poetic convictions”, a key phrase from the opening song.  ‘The Aspidistra House’ followed, as Brown moved across the tiny performance area, engaging with the audience members who were standing barely three feet away.  ‘Land of Holy Joy’ was an early highlight, quickly followed by the soaring ‘Lonesome Dove’.

Brown then dedicated new song  ‘A Beautiful Cat’ to a much-loved pillar of the local surfing community, Stephen Hudson, who tragically passed away earlier this year.  It was a touching tribute to the highly respected surfer, who played a pivotal role in the development of the sport in the North-East.

Great songs followed thick and fast, with Brown pushing his voice to its limits, ably supported by the skilful current line-up of the Band of Holy Joy.  Old favourite ‘Don’t Stick Knives in Babies’ Heads’ was another highlight, but the closing ‘The Song of Casual Indifference’ stole the show, with an impassioned Brown performing the song like his life depended on it.  With Brown still battling with his vocal problems, it appeared at first that the show was over, but the enthusiastic audience roared for an encore, prompting Brown to quote one of Iggy Pop’s famous quips from ‘Metallic KO’ as he introduced a spontaneous take on ‘Louie Louie’.

The party atmosphere in the small venue continued through an extended encore with the stunning title track from ‘Funambulist We Love You’ followed by the audience-requested ‘Rosemary Smith’ and final song of the night, ‘Open the Door To Your Heart’.

Buy Funambulist We Love You here.

Band of Holy Joy are on Facebook and the web.

All words by Gus Ironside.  More writing by Gus can be found here.