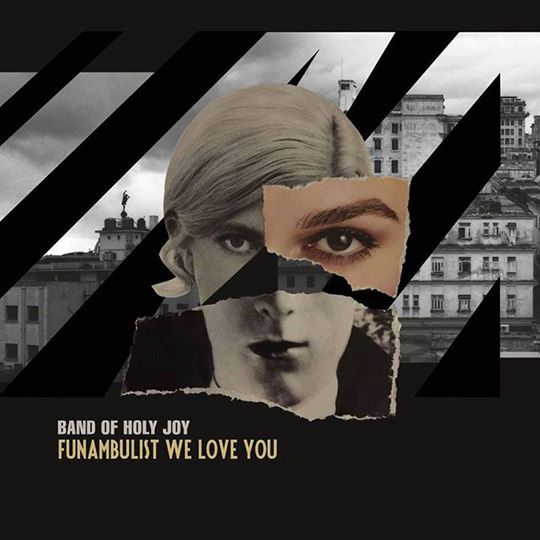 Funambulist We Love You

A new Band Of Holy Joy album is always a cause for celebration. Housed in striking sleeve art by Inga Tillere, Funambulist We Love You is no exception. Despite its themes of personal, sometimes tragic loss, and the UK’s darkening political landscape, the dominant tone of the album is one of tenderness, seeking solace in melody and reflection.

As always, Johny Brown’s idiosyncratic vocal style flirts wilfully between ’60s pop crooner, Tyneside Jacques Brel and discursive Strummer-rant.  Brown is part-singer, part-raconteur, always using his voice as an instrument to serve the beguiling narratives of his songs.  The current incarnation of Band of Holy Joy has more in common with Booker T and the MGs than the often brittle sounds of ’80s indie, yet there are commonalities here with The Pale Fountains, and Brown himself cites The Wild Swans and It’s Immaterial as kindred spirits from that era.  Nevertheless, the dominant musical flavour of Funambulist We Love You is a peculiarly British take on ’60s soul/R&B; this group can cook up a simmering soul stew at will, providing a warm, organic backing to the singer’s tales of everyday life.

Brown’s lyricism has never been keener; on album opener, A Revivalist Impulse, he calls for “the resurrection of hope and possibility…the courage of our scum poetic convictions”, while To Leave or Remain functions on several levels, pondering the nature of change, both personal and political.  A Londoner for over three decades now, the singer has never lost his North-East brogue, nor his connections to his North Shields roots, where Brown’s “scum poetic convictions” first took shape.

Centrepiece track The Song of Casual Indifference evokes Al Green-style soul while playfully referencing The Dead Kennedys’ California Uber Alles, and may well be a kiss-off to the USA, as it begins its Trump-led descent into the abyss.  Throughout the album, Brown seems to be sketching parallels between seismic political change and personal loss, with the spectre of suicide being made explicit in The Song of Passionate Intensity, and haunting the sub-currents of other songs.

A Connecting Ticket posits artistic endeavour as “a promise of light that promotes escape,” while the transcendent title track addresses the precarious nature of art, hope and life itself.  Across its eight purposeful tracks, Funambulist We Love You wraps its philosophical intent in wit, warmth and melody, while Brown utilises current political and personal crises as a prism to explore the Human Condition.  Our “scum poetic convictions” may yet offer salvation, as Brown concludes that, “Astronomy compels the soul to look upwards and leads us from this world to another.”

Why The Band Of Holy Joy remain a cult concern, never quite breaking through to a wider audience, is a mystery that even Johny Brown’s questioning poetics may struggle to solve.

Buy ‘Funambulist We Love You’ here.

More writing on Louder Than War by Gus Ironside can be found here.