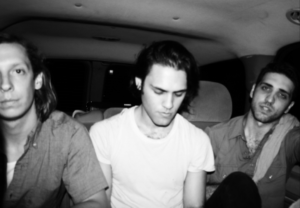 Louder than War have a lesson in abrasive noise melody from some well informed New Yorkers. Good stuff!

Bambara are a three piece Brooklyn based band originally formed in Athens, Georgia. Having had a tumultuous time recording this, their second full length album, this trio waste no time making up for wasted efforts in its making (a lost laptop containing most of this album) From the opening track “Clearing out the weeds”, we get an abrasive distorted wall of sound (very reminiscent of The Horrors, but not as reserved) that permeates the whole album. This band just love abrasiveness and noise and they certainly embrace it.

The bass seems to run throughout this LP chugging away and leading a seemingly runaway train full of misfits with distortion pedals, too much gain and who are VERY pissed (off). This band are very full on and relentless. Their vocals are sometimes ‘phoned in’ a la The Horrors and The Strokes, but they are focused, and most importantly, have the tunes to back them up.

There are spurts of JAMC noise, Nick Cave’s vocals and spite, machine gun drumming, and above all, horror! This band just exudes horror and wants the listener to experience and wallow in it too.

Finishing the album with some free form noise is nice. It references their inherited background in the No Wave bands of NYC and highlights their willingness to make a god awful racket like the glorious Pussy Galore. I like this band!

Bambara can be contacted via their Facebook. Bambara have more music available via their bandcamp