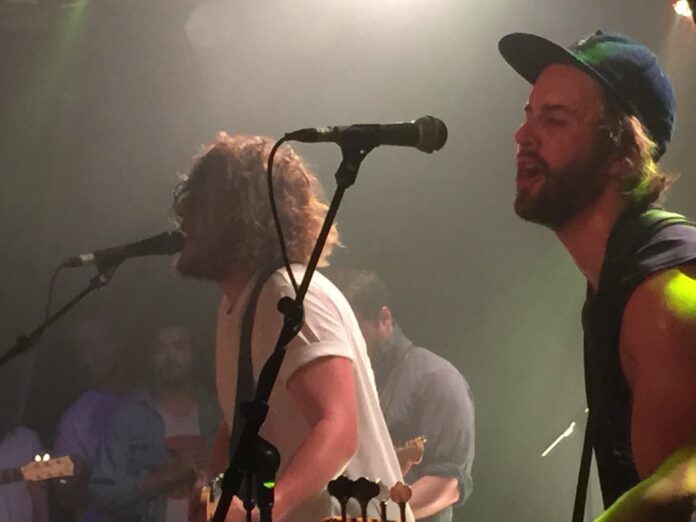 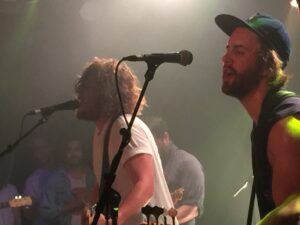 Not content with delivering one of the albums of 2015 in Dogs At Bay, Steve Kyle sees Adelaide’s Bad//Dreems deliver one of the gigs of the year.

OAF is a sweatbox tonight. The only space available is the tiny reserved patch known as the stage, and even that is overrun with the tidal wave of mates flowing off an on from the wings.

Bad//Dreems are building up some serious momentum at the moment. The shows are getting bigger, and selling out each time, and no wonder because these are celebrations. They don’t play to a crowd, or followers, they play to mates. Mates who listen to Dogs At Bay and hear stories that could be about their lives. Stories of broken relationships, yearning for escape, 9 to 5, but also the joy that can be found in those experiences.

Tonight, Bad//Dreems were incendiary, with bassman James in particular providing a diamond hard bedrock from which they could hew their gems.

They’ve made their name through riffs rockers like Dumb Idea, Hiding To Nothing and Cuffed & Collared, all present and correct tonight, but dig a little deeper and you’ll be rewarded. My Only Friend proved oxymoronic given the evidence of 500 OAF’s bellowing along with them, arms around shoulders of mates and strangers alike, while album highlight Ghost Gums drops the pace and shimmers, guitarist and main songwriter Alex bringing out his inner Robert Smith on the beautiful Just Like Heaven, an echoing ode to time spent alone with your thoughts.

It’s on Ghost Gums that the band bring on Ali Wells, sometime replacement guitarist for Alex, who as a plastic surgeon can’t always get time off for gigs. Just as I saw during a previous gig at GoodGodSmall club, this seemed to energise the band, and in particular singer Ben, freed from his own guitar, and seemingly growing to hulk like propositions as he chugged a beer and roamed, nay owned the stage. I think a 5 piece is the way to go boys.

Izzy from The Preatures joined to deliver an inventive and enjoyable cover of The Weeknd’s Can’t Feel My Face, performed that morning on Triple J’s live lounge equivalent Like A Version, but the standout moment for the gig was the throbbing tension of Hume.

Showing depth beyond the garage rock and ballads, Hume is Bad//Dreems doing their take on motorik, perhaps appropriate for a song named after a 500 mile highway. If you’ve ever heard or seen Springsteen’s Because The Night live, then you’ll have witnessed Nils Lofgren’s transcendental guitar solo that lifts a classic into the domain of untouchables. Alex’s solo on Hume had the same effect tonight, and not just on me. When strangers you’ve never met turn to you and deliver an awestruck eulogy on the power of that solo, which at the same time you were also marvelling at, you know you witnessed something special.

Only disappointment? I was hyped for the cover of God’s My Pal, which they’d been playing earlier this year, that never arrived. But it’s only minor, this was a stellar gig from a stellar band.

All words by Steve Kyle. More writing by Steve can be found at his author’s archive, on Twitter @SGSNSteve, and at his website Temple Of Noise