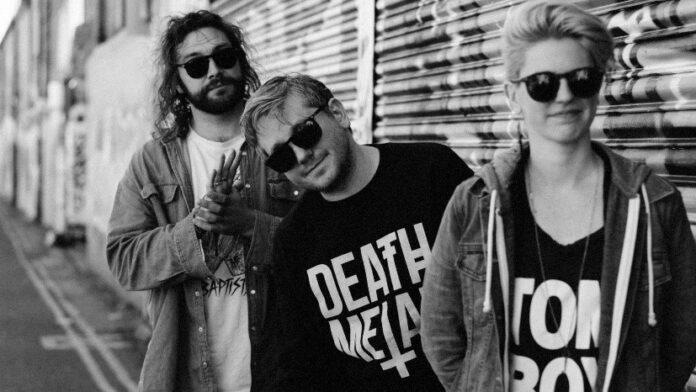 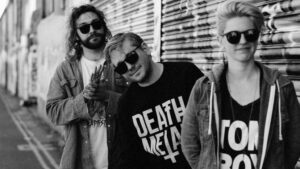 Bad Pop release the penultimate teaser before their Dark Metal EP is unleashed June 15th. Get an exclusive look at the video for single ‘Grey Area’ here.

Meeting in Vancouver’s music and comedy clubs, Canadian trio Bad Pop have shared their mutual love for rock and humour for the past eight years.  They release their new EP Dark Metal June 15th through Killing Moon Records as one of the two fingers they flip in the face of growing up (second EP to follow later this year). With the EP peppered with sarcasm, wit and gritty guitars, Bad Pop release the animated video for their new single Grey Area TODAY as the penultimate teaser before their EP.

Dark Metal serves as the pissed off, aggressive response to capitalism, growing up, human over-population and lockdown in comparison to their existential reaction to follow later this year. The video for Grey Area is no exception with its animated, dark aesthetic showing a world getting destroyed by alien-like figures.

Frontman Chris Connelly states, “I jotted [the lyrics] down in the morning and built the song around the idea of having these dream-like snippets and sentence fragments float around. We even took that approach to the music. We’d take our guitar, bass parts or whatever and chop them up into samples and then build the song up that way. Like how I imagine a DJ or producer would work. Then of course, I had to make the song about how reductionist thinking is kind of ruining the world. Ideas reduced to tweets, music reduced to samples, problems reduced to your parents. Criticize something while doing the thing you’re criticizing, there’s something funny about that.”

With flutters of Supergrass, Weezer and the chorus hint of Blur’s ‘Song 2’ worming their way in, it is fair to say that the sound is nostalgic and unique at the same time. It feels as if you have heard Bad Pop before, but also as if you have never heard anything like them. By happily rejecting the idea of conforming to genre-bubbles, Bad Pop are carving their own path and bringing us with them.

This darker shift that Bad Pop has adopted is a different approach to their previous single ‘Destructo’ which was laced with T-Rex influences and an upbeat tempo. Here, we are given an insight to the darker minds of the trio that could have been inspired by their last year spent in lockdown in Canada. Their move from ‘glam rock meets Pixies’ to a heavier, moodier exterior is welcomed and makes the EP seem just that little bit further away than we hoped for.