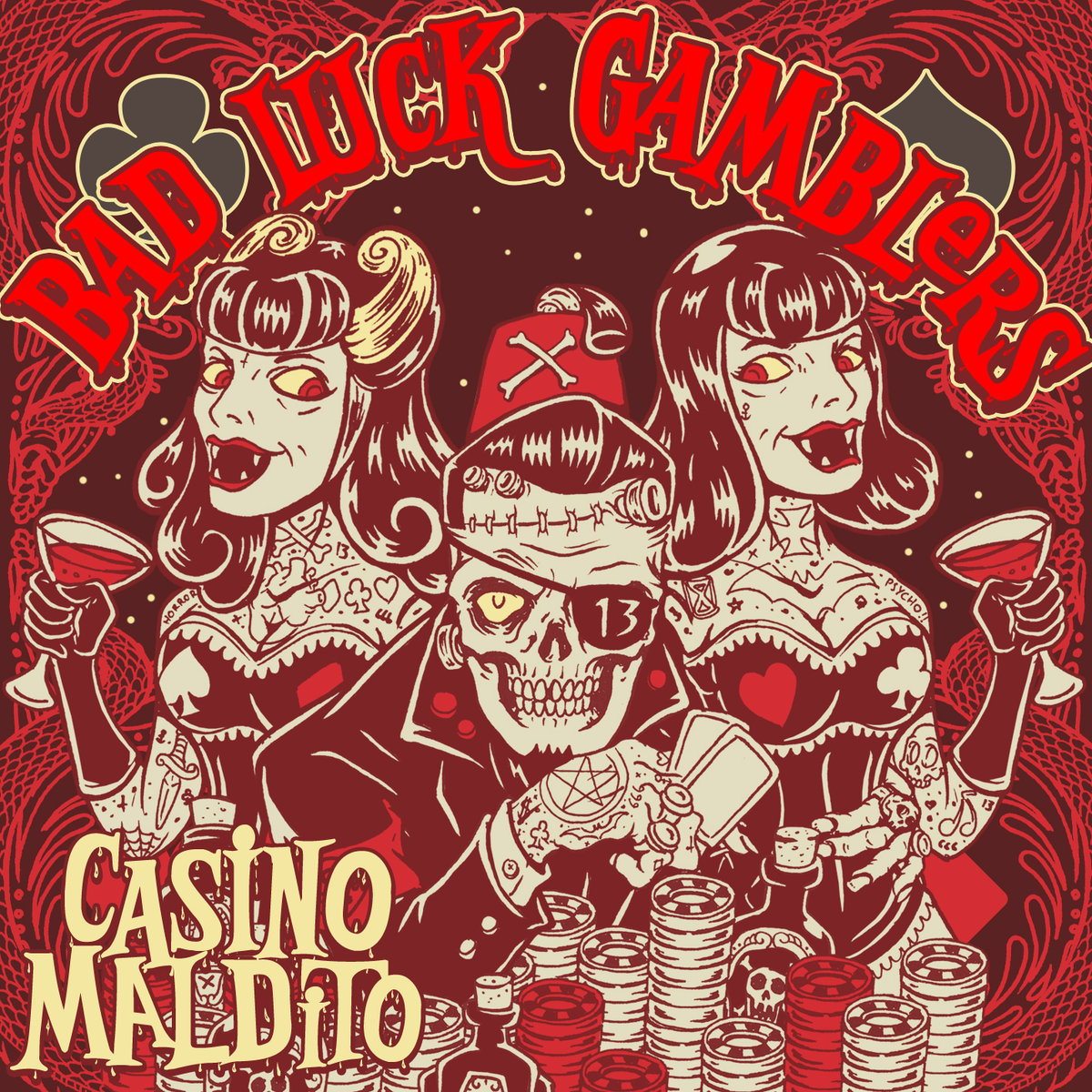 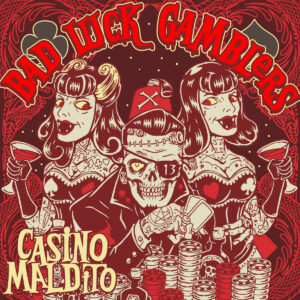 Bad Luck Gamblers consist of 3 Sao Paulo based miscreants who are currently rippin up the international psychobilly/rockabilly scene with their new full length album ‘Casino Maldito’, it’s the follow up to their 2008 debut ‘Don’t Bet On Us’ and the intervening 8yrs has seen these bad ass hombres develop a welcome meaner, more dangerous high voltage edge.

The artwork tells us all we need to know, a single eyed be-quiffed corpse hunched over a mountain of poker chips, two busty vamps swigging blood red liquor from long stemmed cocktail glasses – vying for this bad boys attention; title track and album opener ‘Casino Maldito’…about a cursed casino (ha!, how could it fail?) takes this theme and stamps the pedal to metal, from the military drum retort we are thundering down the highway with some neat guitar lines and an energetic vocal wrapped around a nice twanging slap-bass right into ‘Like A Bat’ which is darker and brings in elements of surf guitar, albeit tsunami sized surf as these hombres warn us of the perils of all night partying.

They certainly have no fear of demonstrating their influences and certainly ain’t going to be confined to a single genre – ‘8%’ harks back to a more traditional rockabilly vibe though riding this is a cow-poke twang…then we step aboard to ride the ‘Terror Train’ from its ghostly opening we are thrust flailing and stomping onto a full on steam, snortin’ behemoth of a rail-road ride to hell, the beast furnace demanding the souls of the unbelievers as the one of the most insane guitar solos cajoles the driver to keep the monster rolling on.

It’s a psychobilly album – therefore it’s the law that at least one track would reference an oversized gas guzzling motor – ‘Rusty T-Bucket’ fits the criteria, and has all the tyre squealing and rod poppin’ you could hope for…and all crammed in under 3 mins; we also get the obligatory instrumental ‘Thylacinus Attack’ which allows each Gambler to crank it out – finally on the humorous ‘Somebody Stole My Pet Possum’ I worked out quite who vocalist Joe Marshall reminded me of…one Col. J. D. Wilkes of the Legendary Shack Shakers, it’s a big claim, and certainly not one Joe himself makes, but there is a clear link, the range of vocal delivery, the versatility in his voice and the ability to harness his rabid zorch mutants behind him who bring this entire ensemble to a close with the initially more traditional stop / start rockabilly infused ‘No Chips, No Chicks’ where Joe delves into a more Latin inspired vocal as the pace erupts to a demolition charged scramble that will fuel the mosh pits of any festival the Gamblers land at.

The Bad Luck Gamblers have crafted a sweat sodden, fearsome, and formidable rock and roll attack to the senses that is well worth closer attention.

Available direct from the band HERE