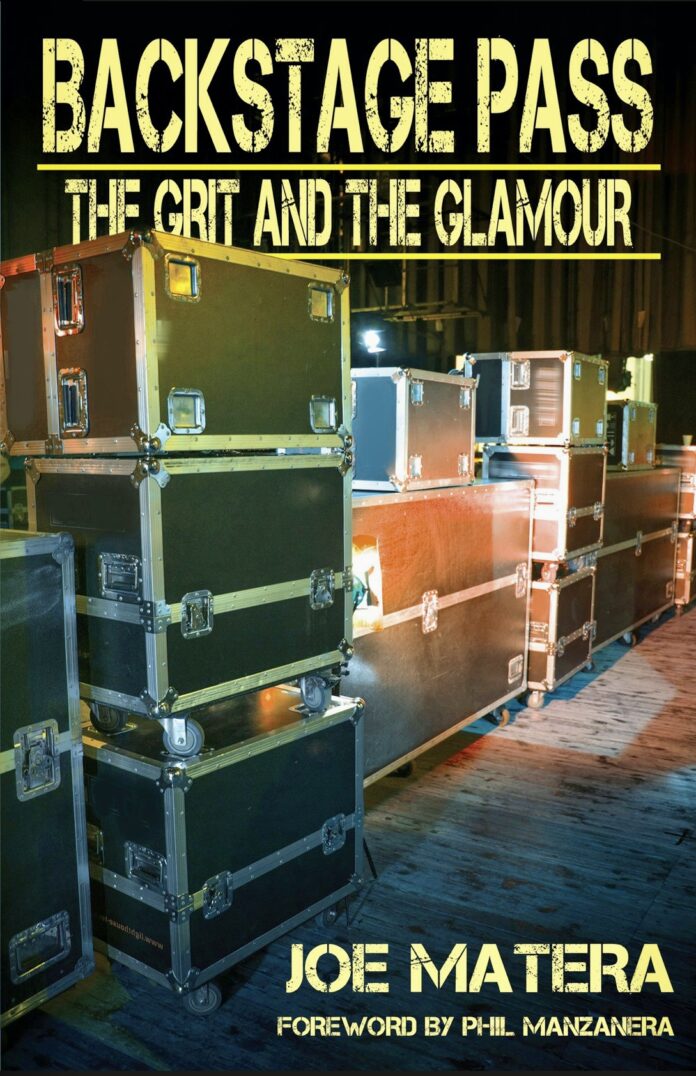 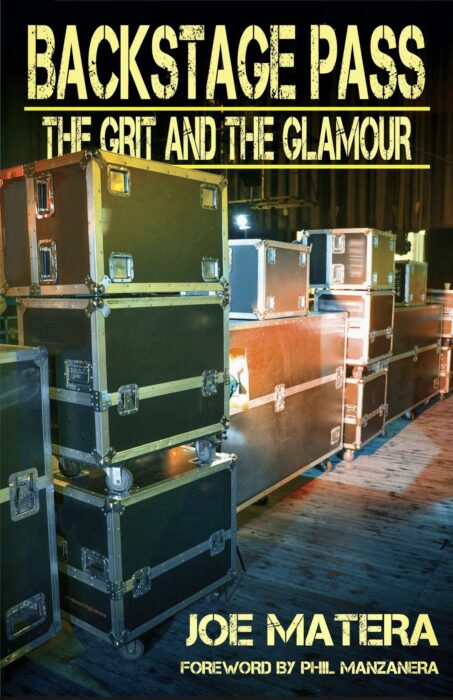 Backstage Pass: The Grit And The Glamour by Joe Matera

“To most people the perception of the life of a music journalist is one of hanging out at parties with rock stars, partying until the early hours of the morning, jetting off to faraway locations and indulging in all the glamorous benefits that come with hanging with that sort of crowd. This perception couldn’t be further from the truth.”

From the moment I read the Prelude of Australian Joe Matera’s Backstage Pass: The Grit And The Glamour I was hooked. It may have been mentioned in other books, by other journalists, but the way he describes how the majority of us quietly undertake the task at hand, spending hours researching material for reviews or interviews, then transcribing and writing things up; often not for money, but for the privilege of being able to meet and spend time with your musical heroes or talking about music with like minded souls. It’s good to see that those who have been successful, like Joe, are on the same page (pun intended) as am amateur such as I.

That said, he nearly put me off with the first chapter, not that Joe had done anything wrong. His first major interview was with the Canadian band Nickelback in 2001, shortly before they had a worldwide smash with How You Remind Me. As the author says, you couldn’t turn on the radio without hearing it. I can attest, as I spent 3 weeks in Australia during 2002 and that (bloody) song was everywhere. I’m trying not to let it become an ear-worm as I type. It didn’t matter where you went, shopping malls, bars, taxis, it was omnipresent and often accompanied by locals singing along, badly. Thankfully things get back on track with Joe’s account of interviewing and later meeting the legendary Lemmy when Motörhead travelled down under with Motley Crew. People often say you shouldn’t meet your heroes, however, this is a clear counterpoint that you should. In a few pages, the experience of meeting a genuine legend is encapsulated as well as capturing the madness and excesses of life on the road.

As well as being a renowned journalist, published by magazines such as Rolling Stone in Classic Rock, Record Collector and Metal Hammer in the U.K as well as Guitar World and Goldmine in the U.S.A; Joe is also a prolific musician, both in bands but also a solo performer. Having one foot in each camp clearly has its benefits as it has allowed the author to build a rapport and gain the respect of some true legends. Although it’s only 250 pages long Backstage Pass is bursting with stories of the experiences and encounters the author has had, as both a talented guitarist and as a journalist. A real page-turner that will have you wanting to know whose next, regardless of whether you are familiar with the music of the artist or not. What’s refreshing is the openness, Joe doesn’t hold back and is honest. It’s not all sex, drugs and rock n’ roll. He covers the mundanity of being a musician on the road, capturing the highs and the lows. He rightly enthuses over interactions with the likes of Pink (whom I hadn’t realised took her name from the character Mr Pink in Reservoir Dogs); Suzi Quatro and Sir George Martin alongside his experiences working with Steve Harley and supporting the Bay City Rollers, but also covers things when they aren’t quite right such as with Billy Corgan and Death Cab For Cutie.

If you’re a music fan (and I’d suggest you are if you’re reading this) then Backstage Pass: The Grit And The Glamour is an informative and insightful purchase that you won’t regret.