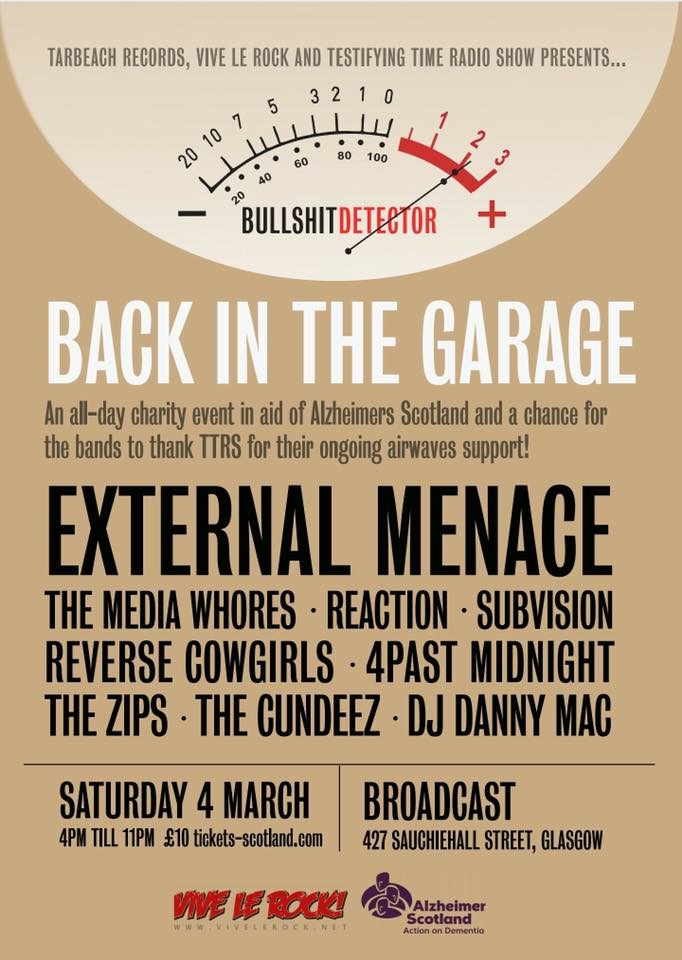 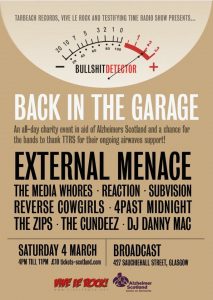 There’s a lot of bad vibes in the Scottish punk scene. That’s an article for another day but some of the leading lights and one surprise in particular are pulling out the stops for a charity all day event on 4 March  at Broadcast on Sauchiehall Street.

Danny Mac runs the Testifying Time Radio Show in the city and is responsible for airplay to a wide range of local (and not so local and even transatlantic) music that probably wouldn’t get the attention from the closed shops at both BBC Scotland and Clyde 1.

As a gesture of thanks and support to Danny, Vive Le Rock are sponsoring an all-day show at Broadcast featuring some of the bands he’s helped. The gig is in aid of Alzheimers Scotland and tickets are a tenner – all proceeds to the charity.

In a bit of a coup, External Menace will play their first Scottish gig in 19 years as headliners. External Menace, originally from Coatbridge, rarely play due to them being spread across the country these days and this will be a real treat to see them return in a homecoming that’s much anticipated and creating quite a buzz.

Opening the show in the afternoon are the mighty Cundeez from Dundee – they made such an impression at Rebellion in 2015 that Darren Russell had them back to open the outdoor stage last year. The Cundeez are a bunch of crazed punk-ska loons with bagpipes. Not to be missed – get there early for them and don’t be disappointed.

The Reverse Cowgirls bring the fury of The Gun Club and the snazz and pizzazz of The Cramps to the table. With Hugh McLachlan an eye-poppin’ frontman, they’re on later in the evening and are much anticipated.

The Zips should need no introduction; Glasgow punk originals, they’ve kept the flame burning bright all these years and in JonZip they have a singer who’s commitment to the cause of punk rock is never in doubt.

4 Past Midnight have released a few scintillating albums on STP Records and are highly regarded in these parts. They don’t play live anything like enough locally and lots of people are buzzing to see and hear their Clash/Ramones inspired racket in full effect. Their most recent album which is a career-spanning compilation is gaining them new fans.

The Media Whores are Vive Le Rock favourites with two 9/10 reviews for their preceding two albums. Having recently opened for The Damned, Big Country and Duncan Reid, their star is firmly in the ascendancy and a Whores show is something to behold. They promise that burlesque dancer Scarlett may make an appearance, too…

Finally, my own mob, Reaction are playing somewhere during the day. With tickets flying out the door, pre-booking for this small venue is heavily advised.

Tickets on sale here and event info on Facebook.

All words by Joe Whyte. You can read more from Joe in his author archive.