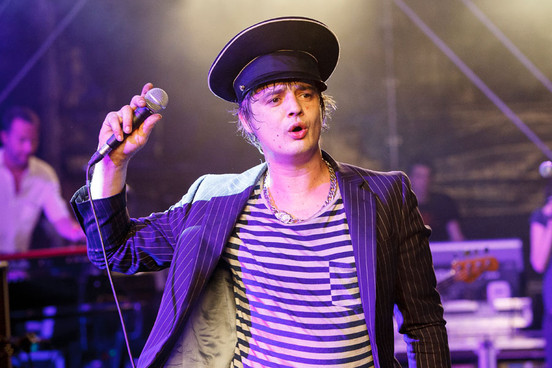 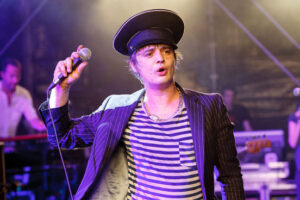 Fergal Kinney revisits the Babyshambles tour hoping for a better night than when he last went in September and finds his faith rewarded as Pete Doherty and the boys play a blinder.

Rule number one of the tortured artist – the ends must occasionally justify the means. The last time I saw Babyshambles, in Manchester last September, it was all torture and no artist. A sold out Saturday night crowd watched on in bemusement as the concert collapsed into calamity across a set that barely lasted an hour. Despite having just released a strikingly good album in Sequel to the Prequel, it looked as though Babyshambles were descending into self parody for £20 a throw.

Tonight at Camden Roundhouse, the communal nervousness customary for a Babyshambles audience is intensifying as the clock nudges further from the allocated stage time, seemingly suggesting the widely expected worst. Finally, after a short message of thanks from the food-bank charity for which tonight has been raising funds, Babyshambles make their entrance to the stage. Before even a word or a nod to the audience, Doherty is beginning the opening guitar chimes to 2007 single Delivery, and suddenly all is forgiven – even from me.

From just the first song, it’s clear that this is a band at full pelt, and not just in comparison to the disastrous Manchester show. Where last September Pete Doherty was a stumbling mess of hair in a jumper you wouldn’t sleep in, tonight he’s comparatively fighting fit in a three piece suit and wide brimmed fedora, tilted to reveal a severely shorn skinhead crop with more than a hint of grey. Following Delivery, last year’s single Nothing Comes to Nothing is quite rightly received with rapture, as perfect a slice of jangling indie pop as you’re likely to find this side of Johnny Marr. Indeed, this is one of many reminders across the last two Babyshambles records that this is band with an output that has really begun to surpass what Doherty achieved with The Libertines. The Libertines burnt brightly and shortly, but there’s enough tonight to suggest that Babyshambles have grown into something of a PiL to the Libertines’ Sex Pistols. That is, when Doherty feels like it. As strong as tonight’s set is – and it really is – Babyshambles will always struggle to be taken seriously whilst the band play second fiddle to Doherty’s lifestyle.

Babyshambles’ rhythm section are phenomenally tight with a versatility that perfectly compliments Doherty’s writing – there’s flourishes of reggae in places never previously expected and the full blown ska of I Wish and Dr No are clear highlights tonight.

If there’s anything Babyshambles certainly can do, it’s wonky exuberance – the punk rush of Fireman tonight is as much proof as is needed – but tonight the slow burning Penguins and gorgeous Sedative show a band unafraid to delve into more nuanced, enigmatic shades of Doherty’s palette. Aside from requiring an impromptu guitar lesson from the long suffering Mik Whitnall at the beginning of the anthemic Farmer’s Daughter, Doherty sounds like he’s finally turning up to rehearsals and is a reminder that at best he’s quite comfortably one of the most original and engaging frontmen of his generation. A compulsively watchable onstage presence, Doherty croons, yelps, flails with the microphone lead, straddles the PA, lunges into the audience and never loses an ounce of the unique power he holds over his audience.

The monstrous, thrashing Stooges workout of Fuck Forever brings the set to a thunderous close – or at least it was supposed to. As the venue empties and roadies begin clearing away equipment, Doherty returns stridently to the stage, a surprised audience spilling back into the hall for an equally surprising cover of Bonnie and Clyde. Thus begins a not unamusing game of cat and mouse between staff and Doherty; the venue staff tied between a strict 11pm curfew and Doherty’s insistence on carrying on the set. In a moment of appeasement, the band are reluctantly permitted back onstage for a triumphant run-through of Albion – the 2005 celebratory hymn to the England of both the mythical and the kitchen sink. Following this last hurrah, the pull is plugged on the sound and the house lights turned back on; Doherty sits oblivious in a feather boa, strumming to the equally engrossed audience. Usually the first not to turn up, tonight Doherty was amongst the last to leave, and after another ten minutes of silent on stage protest Doherty shrugs and exits stage left.

Though tonight did confirm my suspicions that many amongst Babyshambles’ audience would gladly stand and watch their hero stood silently on a stage, there’s more than a little cause for optimism than this is a band whose best days may not be behind them, and could just pull off the feat of stepping from the respective long shadows of the Libertines and Pete Doherty’s extra-curricular activities to become a force in British music once again.