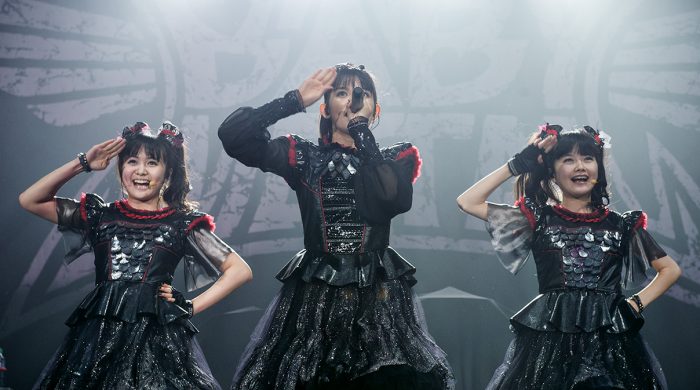 The hype surrounding BABYMETAL since their formation in 2010 has grown from the band being seen as a novelty act to gaining credible recognition for their act. Through the viral nature of their act, slots at the UK’s premier metal festivals and two well received albums has seen their star rise quickly.
Having headlined Wembley Arena earlier in the year, closing out 2016, the band have been playing support to Red Hot Chili Peppers on their frst UK jaunt for five years.

Opening up with their track BABYMETAL DEATH – the trio, (Su-metal, Yuimetal and Moametal) flanked by the Kami Band marched onto the stage in their matching outfits, setting the tone with their highly choreographed moves.The Kami Band, decked in all white and faces painted, took centre stage half way through the set to display their solo talents on guitar, bass and drum respectively. The riffs and blast beats that the band purvey would make the most ardent fan of the down tuned riff purr.

Throughout the set, the band gradually won over the crowd with their enthusiastic efforts to warm up the crowd. At several junctures the band had the growing audience clapping along with them and calling back the stadium rock style ‘woah-woah’ chants – reciprocating the enthusiasm and energy that
BABYMETAL display. 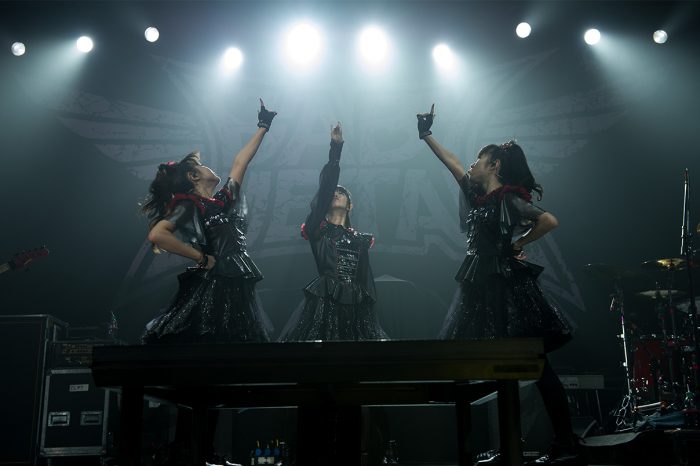 Set closer, GIMME CHOCOLATE is clearly the bands party piece and obvious crowd pleasing hit to close with. The almost pop-punk style chorus led to more crowd participation from the crowd and the band, leaving the almost full arena ready for the main act. However you felt after BABYMETAL’s opening set, one thing you can’t deny is the fun that they inject into a crowd. Their fervent energy and excitement is infectious, and they completed their role in warming up the crowd.

During the Red Hot Chili Peppers’ quite frankly amazing set, BABYMETAL injected their unique gusto into the set and appeared with the band to perform Nobody Weird Like Me, from their 1989 album; Mother’s Milk. With more prestigious support slots to follow in the coming year with headliners Guns’N’Roses and Metallica, there is only one way BABYMETAL are going.