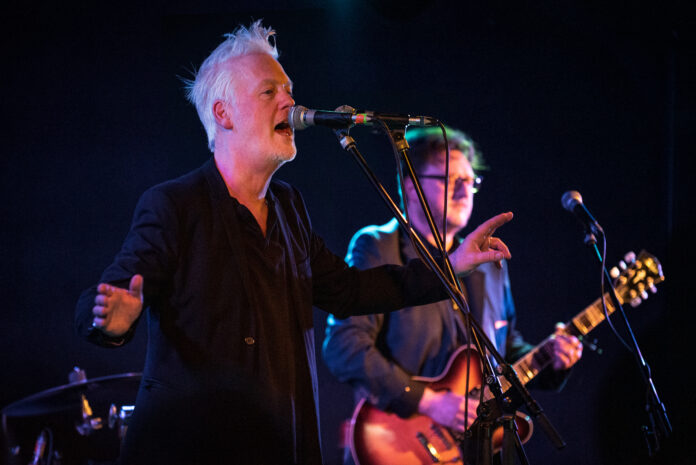 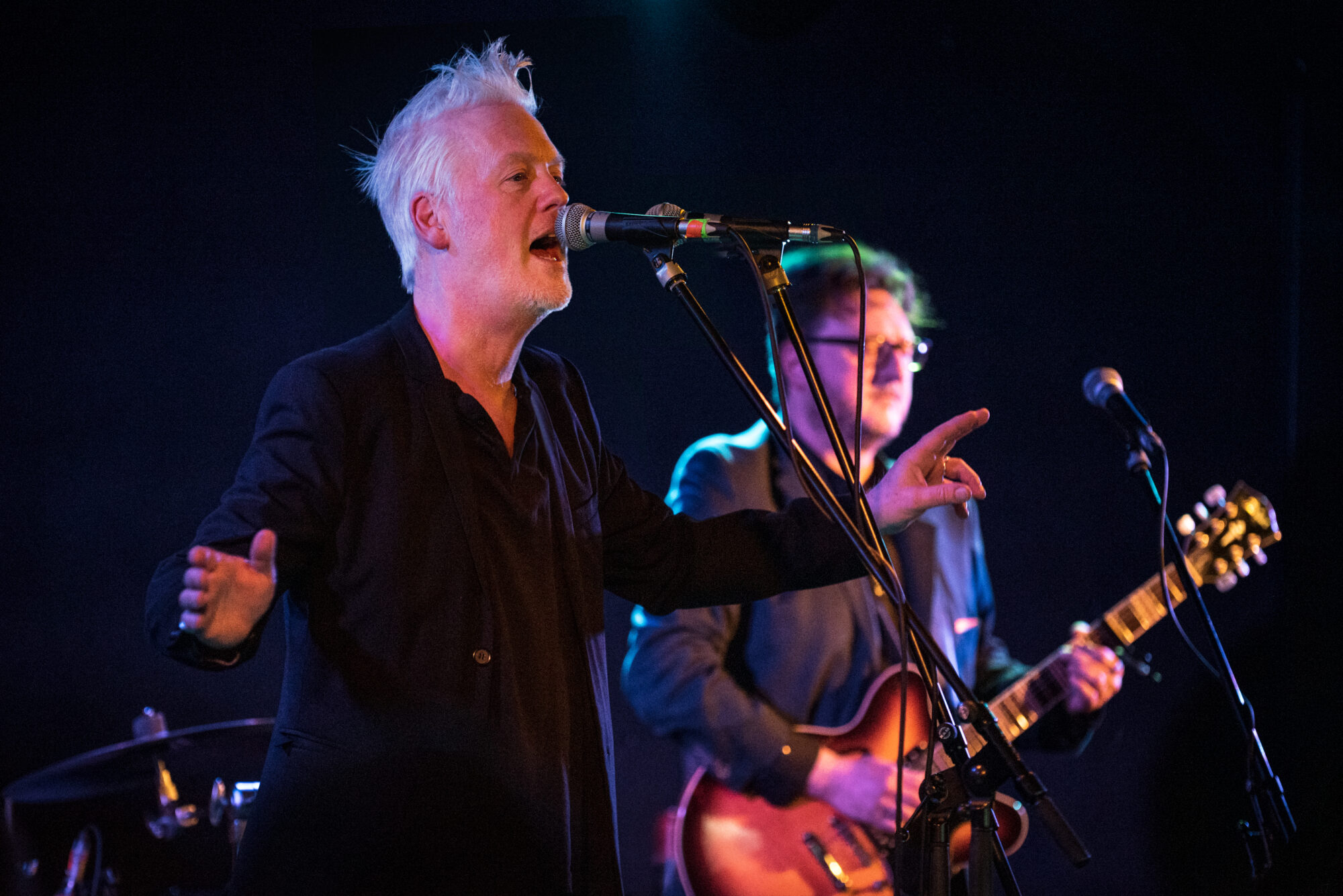 Andy Brown heads down to The Brudenell Social Club to catch cult indie-pop underdogs, Babybird. He shares his thoughts for Louder Than War.

OK, let’s get this out of the way from the start. If you haven’t explored the work of Stephen Jones aka Babybird beyond that song then you truly are missing out. Babybird first hatched in the mid-nineties when Jones released a series of lo-fi solo albums followed by Ugly Beautiful in ’96. TV appearances, interviews, celebrity endorsements and one unfeasibly large, hit single soon followed. Since then Jones has recorded an obscene amount of music. From the late nineties masterpiece, There’s Something Going On to over one hundred self-released albums on Bandcamp. The current tour may be marking the 25th anniversary of Ugly Beautiful but there’s a wealth of underappreciated gems that need celebrating too.

The night begins with an intimate set from Liverpool’s Ian Prowse. Prowse fronted indie acts Pele and Amsterdam and has just released a brand new solo record, One Hand On The Starry Plough. The album was made with a full band (and a gospel choir, no less) but tonight it’s just Prowse and his trusty acoustic guitar. The set is full of bold, big-hearted songs, embellished with anecdotes and Prowse’s gift for storytelling. 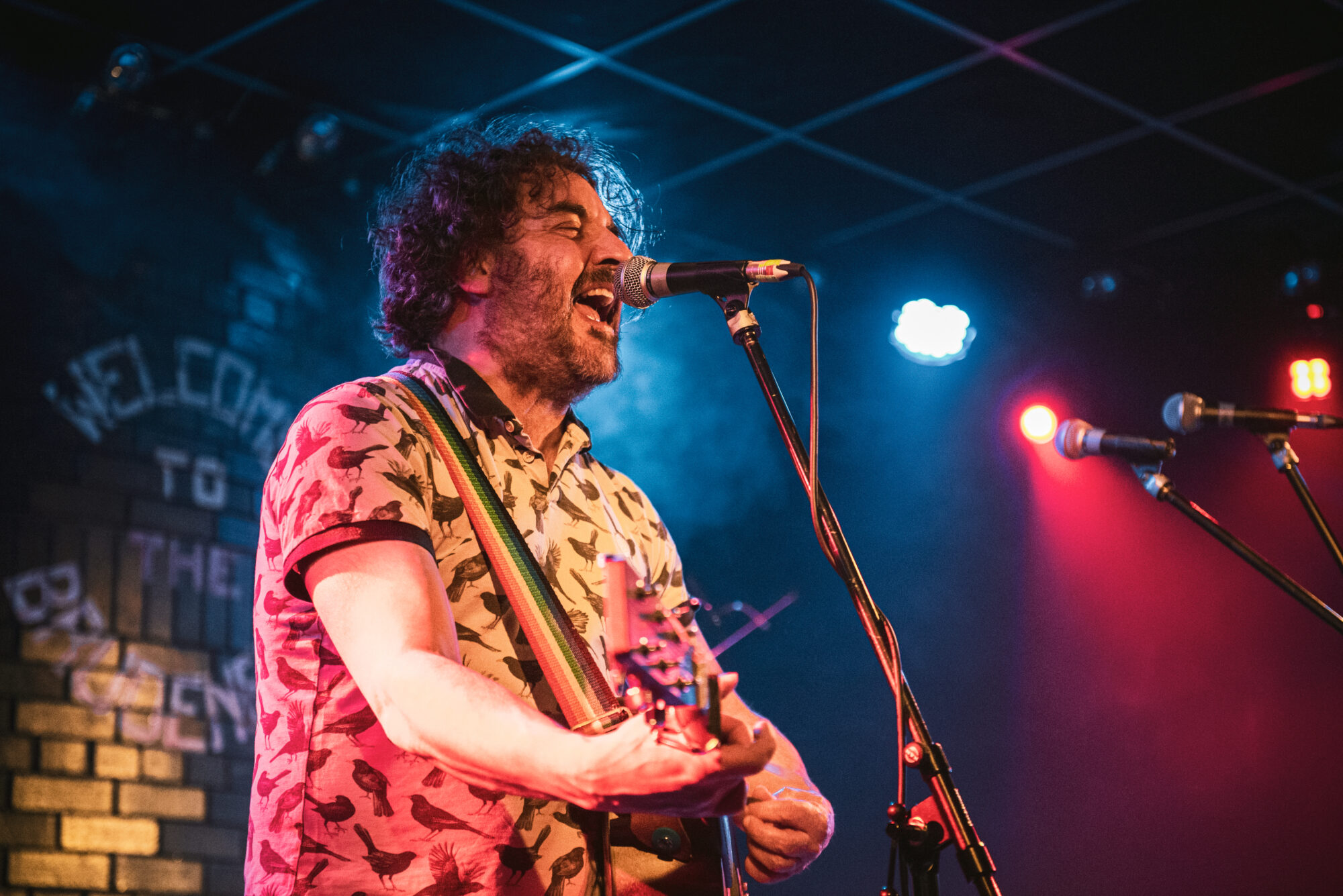 The songs cover everything from unique burial rituals in Liverpool (where the ashes are thrown in the Mersey) to a song about trade union activist Des Warren. The latter is, quite rightly, greeted with a fist of solidarity from a fan at the front of the stage. You can hear echoes of Billy Bragg and the influences that guide his craft. His daughter, he tells us, was named after a Bruce Springsteen song. And no, it wasn’t Born To Run. “If you like what I do, my name is Ian Prowse,” he tells us before adding, “if you think it’s shite, I’m Ian McNab”. Thankfully, I really do like what he does.

While Jones releases a lot of music as a solo artist, tonight is all about Babybird the band. The bass kicks in and we’re flung headfirst into a satisfyingly raw take on Getaway. “Get away with you/ Get away from me” sings Jones over the garage rock rumble, “Get away from all of it across the sea”. And who couldn’t do with a nice little getaway at the moment? They follow this up with the first cut from Ugly Beautiful; the lilting jangle-pop of July. It’s such an effortlessly lovely song, even if Jones confesses that he can’t stand it.

If you haven’t heard Ugly Beautiful in a while then you really need to go back and give it a spin. Cornershop is dedicated to the people of Russia and comes across like Kennedy by The Wedding Present while Dead Bird Sings remains utterly beautiful. That incredible voice pulls at the heartstrings of the entire room. Appropriately enough, the superbly sleazy Too Handsome To Be Homeless is revealed to be a song about MPs. A snarling, strutting and immaculately executed deep cut. 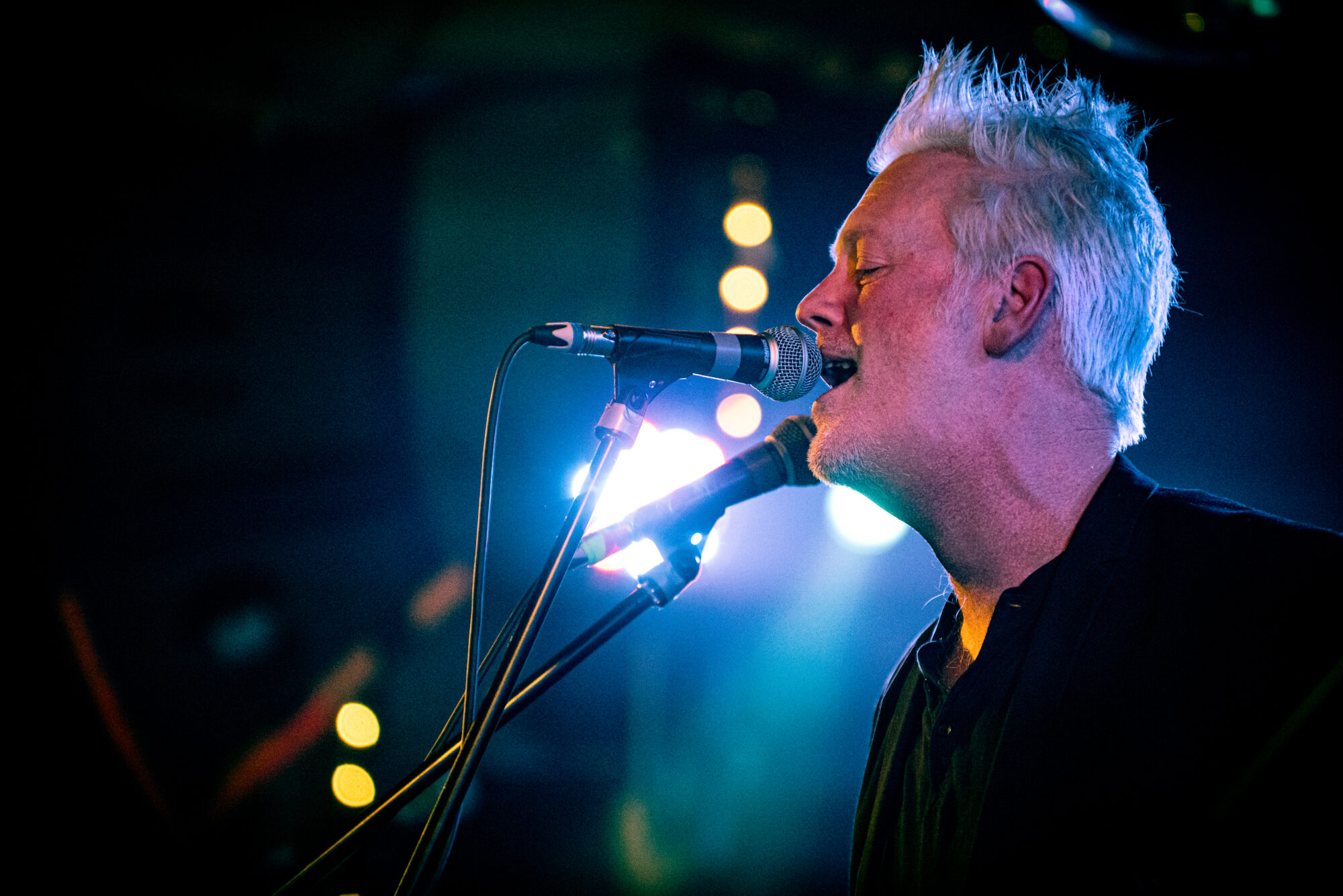 Jones jokes about the M62 being lined with endless vinyl copies of the album, but this is about as far away as you can get from ‘landfill indie’. If the album were to be melted down, I’m fairly certain it would provide adequately sturdy material. This is indie of the highest quality, people. There’s a wealth of albums to draw from though and 2010’s Ex-Maniac has some real gems. The beautifully life-affirming, Failed Suicide Club is one such jewel. The hairs stand up on the back of my neck as Jones repeatedly sings, “yes, you’ve made it you’re here!”

Jones insists he’s never written a negative song but they do get very, very dark. It blows my mind that the brooding Bad Old Man was released as a single at the height of the band’s fame. “He had a bad old man/ who beat him” sneers Jones, “took a hammer to his knees just to please him”. Ouch! Luke Jones effortlessly transposes the piano motif into a suitably scathing guitar part. All Men Are Evil taps into a similarly dark, unforgiving place. It’s in moments like this that the band really bare their teeth. 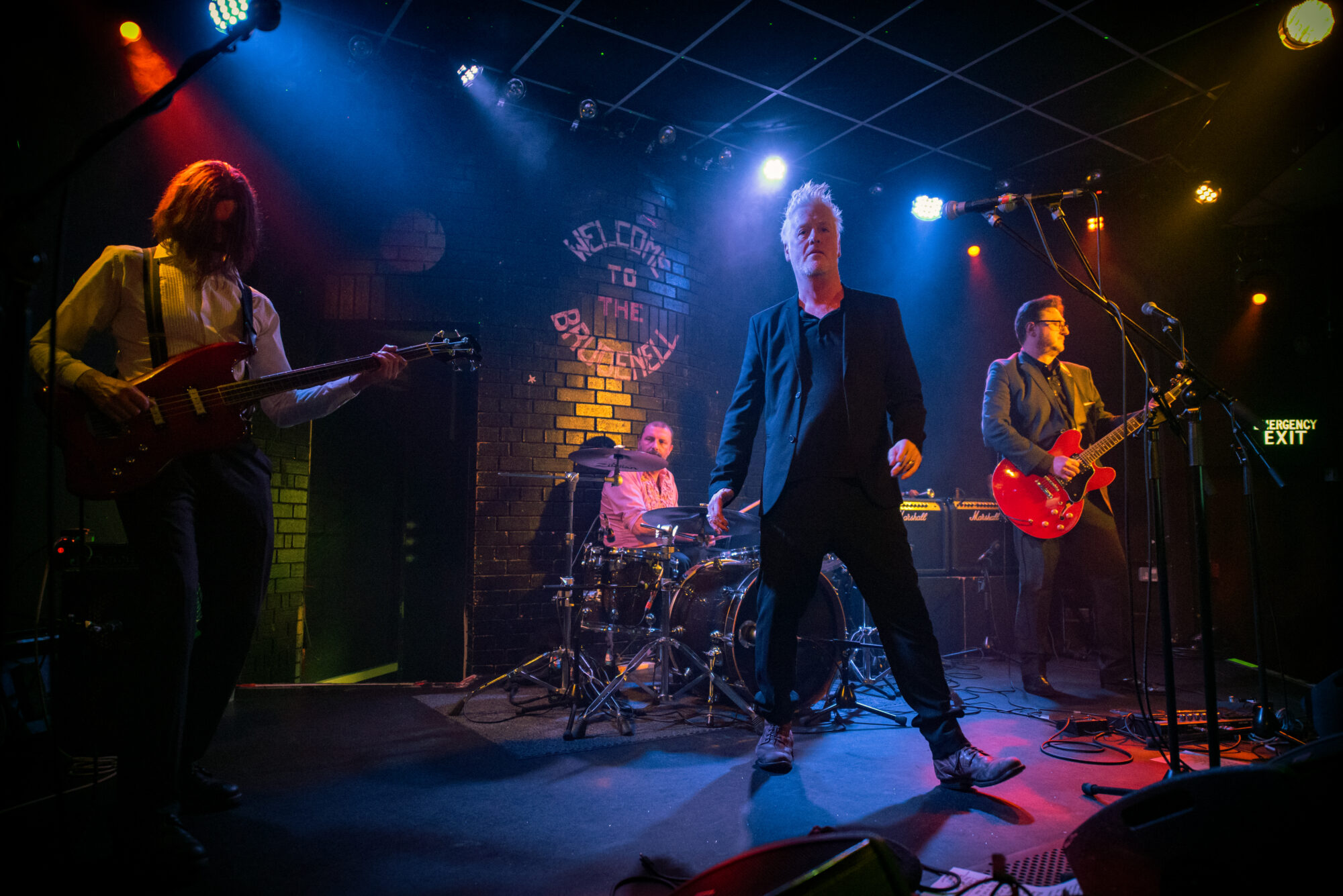 Of course, this being Babybird, there’s plenty of bruised romanticism to be had too. Unlovable, If You’ll Be Mine and the swooning The Way You Are are prime examples. An initial attempt at You’re Gorgeous gets off to a shaky start when Jones indulges a suggestion to sing it acapella. “You’ve done this” he scorns in mock exasperation, “with your stupid You’re Gorgeous acapella shit”. Jones promised his daughter he wouldn’t swear tonight but that hasn’t gone particularly well.

The encore ensures we’re left absolutely floored. The soaring obsession of Back Together, the joyous Goodnight and the sheer swagger of The F-Word. The Life contrasts wonderfully with a (non-acapella) version of You’re Gorgeous. But then again that’s Babybird all over; ugly, beautiful and everything in between. “I’m in Leeds which is a very odd city,” Jones tells us, “I like odd”.

Catch up on all the latest Babybird music HERE and HERE on Bandcamp.

All photos by Jim Mumby