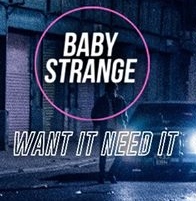 Baby Strange – Want It Need It

Those not familiar with the singles Baby Strange have released over the last two years may be surprised by how good Want It Need It really is. The band’s first album features many of the tracks their fans have grown to love via their incendiary live performances. The music is razor sharp, a wake-up call rousing sleepy indie kids from their apathy. The style is harsh, but drenched with enough lush vocals and guitars to occupy the middle ground between punk and pop. Want It Need It is beautifully dangerous.

Many of the tracks on Want It Need It have been re-mastered following their release as singles. There is a slight veneer of sophistication brought by the sound engineering, but it does not take the sullen fire out of the music. Johnny Madden’s vocals remain rich and still hold a hint of foreboding. The McCann brothers provide drive and excitement, a rock-solid basis for Madden’s searing guitars.

Pure Evil starts the album with trademark starkness. From the first brutal guitars and sinister bass, the track menaces before the lyrics have a chance to finish the job. One of the Baby Strange anthems, the trio have chosen to hit the listener straight between the eyes from the outset.

The styling of Nude has all the makings of a pure punk classic. Energy and drive from one of the lesser known tracks on the album. All round class with seriously good guitars and group vocals.

Pleasure City may be one of the most memorable tracks on Want It Need It. This is Baby Strange at their most relaxed and assured. More pop influences show themselves here. Pleasure City has a 1970s feel and references some of the best music of the era.

From the 1970s to the 1950s, the guitars at the beginning of California Sun have a distorted surf feel. The closest to a slow track on Want It Need It, it has the best lyrics on the album. It acts as a perfect showcase for the depth and range of Johnny Madden’s vocals; heartfelt without sloppy sentimentalism.

VVV is a suitably sultry offering, given the lyrical content. The slow rhythm pushes the track along the bed rock for some more Another song harking back to 70s rock glamour, VVV is a stunning track; unique and very special.

The re-mastered version of Friend is as frantic as ever, a good drum-driven slice of rough punk-pop. However, of all the re-mastered tracks this is probably the one where the original edges are rougher and the vocals more strident.

Trouble is another newer track and, again, is an anthemic winner – catchy, bleak and rousing. Rock-punk at its best. Also a recent single, this looks set to join the already strong live repertoire.

Baby Strange brought Distance Yourself out as a single somewhere round two years ago. Another re-mastered track, this has retained more of the original feel of the song than Friend, with the newer vocals only slightly more polished than on the original. A song soaked in the sweat of the Saturday night club scene.

The track with the strongest pop sensibilities, Human, has an 80s feel, which makes it sit slightly awkwardly with the other tracks. It is an excellent song, though, and shows Baby Strange are far more than whirlwind energy and ear-worm choruses.

The title track, Want It Need It, is the most frantic, driven song on the album. An early piece, it is an excellent doom-ridden extravaganza. This fantastic track gives the album a magnificent ending.

Baby Strange have produced a stunning first album. Want It Need It shows that the quality of music they have been producing from the very first tracks through to their most recent additions has never faltered. The album captures the excitement of their live shows and shows how much class and talent Baby Strange have. The band’s following in Scotland, and especially in their native Glasgow, already know how special Baby Strange are. Want It Need It should show the rest of the world exactly what they have been missing.

More Information about Baby Strange at: